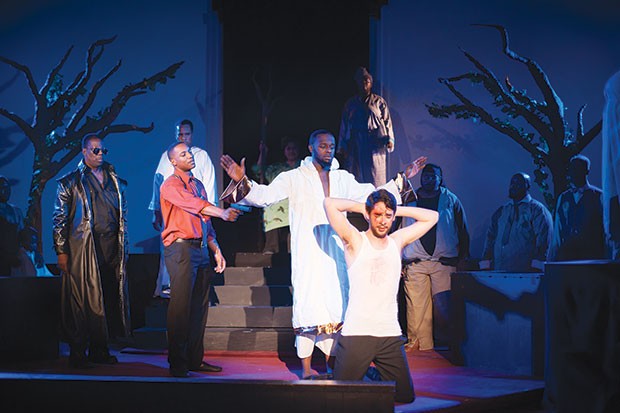 There’s nothing shy or subtle about A Gathering of Sons, a new work developed and produced by Pittsburgh Festival Opera. Big voices. Big cast. Big undertaking.

More allegorical than narrative, Gathering taps into atavistic traditions of community in union with, and guarded by, spirits of the ancient world: earth, sky, sea, blood. But there are strong Christian themes of redemption through suffering and understanding. And ultimate forgiveness.

Solidly operatic in structure (score by Dwayne Fulton, libretto by Tameka Cage Conley), Gathering incorporates elements of gospel, jazz and pop. The plot: A heartless white police officer (Lockdown) kills a young black man (Victor). In secret, the cop thinks, but the Legion of Sons, souls of Victor’s kin past and future, stand witness and cry out to the ruling spirits, who are themselves appalled. Adding to his crime, Lockdown steals Victor’s “magic,” passed down through the generations. The spirits wreak vengeance.

Contrasting Victor’s death is the birth of a son (Freedom) to his brother and wife (City and Violet). City, himself a police officer, promises his own revenge, but he cannot surpass what the spirits have wrought.

The power of Gathering is not in the story but in the strength of the ensemble, directed by Mark Clayton Southers, of Pittsburgh Playwrights Theatre. Magnificent in bringing home the crime to the guilty are the powerful-voiced spirits: Demareus Cooper as the stolid Speaking Earth; Charlene Canty as The Sky That Can’t Stop Seeing; Michele Williams as The Waters; and Rodolfo Giron as The Blood. Fantastical hair and makeup by Jina Pounds, and costumes by Tony Sirk, cleverly delineate each, while underlining the magical expression of the opera.

The “mere mortals” also acquit themselves well: Denise Sheffey Powell as Victoria, a widow newly grieving her son in solo and heartfelt duet; Miles Wilson-Toliver as City, the joyful father and enraged brother; Adrianna Cleveland as Violet, wife and new mother battling new fears; and certainly not least, Robert Gerold as Lockdown. Not just the villain of the piece, Gerold has the greatest journey to make (and most of the scenery to chew) from quintessential asshole to sincere repentant. His suffering is truly operatic in nature.

Straddling the worlds of the living and the dead, Victor (Terriq White) inflicts the most exquisite pains on his killer, who at last understands Victor’s lost future and unborn descendants. Victor embodies the many unjustly killed black men who motivated the Festival’s commissioning of Gathering for its Music that Matters series.

And let’s give deserved shoutouts to Kevin Maynor, towering physically and vocally as the embodiment of Glock; Austin Keys as the golden boy, Freedom; set designer Hank Bullington, for his skeletal trees wrapped in vines; and conductor/orchestrator Robert Frankenberry.

“We Are One,” the triumphal march that solidifies the theme of A Gathering of Sons, leaves the audience thrilled in their bones.