Playwright Hnath tells the story so as to draw in everyone, believer or not 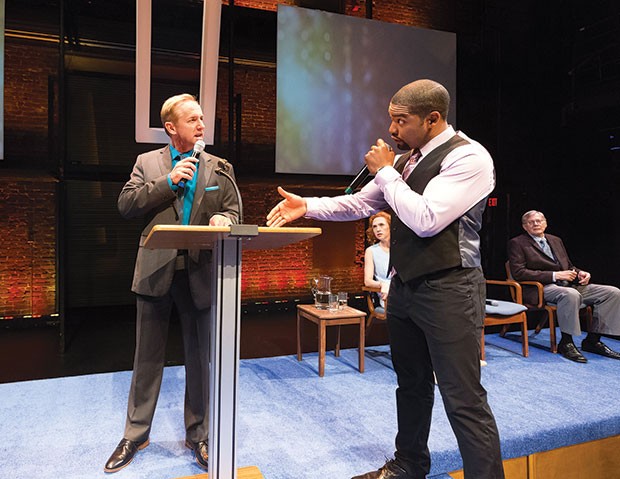 In Lucas Hnath’s exceptional 2014 play The Christians, the pastor of a contemporary megachurch announces that there is no hell. Then all hell breaks loose. Associate pastor Joshua, upset with Pastor Paul’s abrupt declaration that the devil is fake and everyone gets into heaven, quits and forms his own church. Church elders fret. And then people start questioning Pastor Paul’s motives.

The Christians, getting its Pittsburgh premiere at Kinetic Theatre, is a serious, respectful inquiry into the nature of belief, a question here posed as “Can Christianity survive without hell?” But Hnath tells the story, and frames his characters, so as to draw in nonbelievers too. Pastor Paul is sincere but quite slick, perhaps suspiciously so. Associate Pastor Joshua is the fiery, seemingly unbending traditionalist. Everyone struggles.

In The Christians, Hnath — a rising star lately known for his multiple-Tony nominee A Doll’s House, Part 2 — breaches the wall between characters and audience in a novel way: From Pastor Paul’s full-length opening sermon on, we’re addressed as though we’re parishioners. This includes the characters’ constant use of microphones throughout these intermissionless 90 minutes, even during scenes taking place in private. (Is Hnath suggesting that everything the characters say is “public,” or might as well be? Or is it just that the characters themselves see it that way?)

Kinetic’s production, directed by artistic director Andrew Paul, transforms the New Hazlett into a blandly welcoming nondenominational sanctuary, complete with three-person choir singing cleverly curated classic hymns. Pittsburgh favorite David Whalen is riveting as Pastor Paul, the would-be theological radical who says that suffering is the distance between people, only to learn that greater proximity is no barrel of monkeys either. Whalen gets outstanding support from Joshua Elijah Reese (as Joshua), Mindy Woodhead, Robert Haley and Gayle Pazerski.

Whom does God speak to? And what if he tells two of his conversational partners contrary things? How would having no hell change our idea of heaven? Is heaven a place we should even be able to imagine? And most importantly, why do people believe what they believe? The Christians succeeds both as engrossing entertainment and as food for philosophical thought.