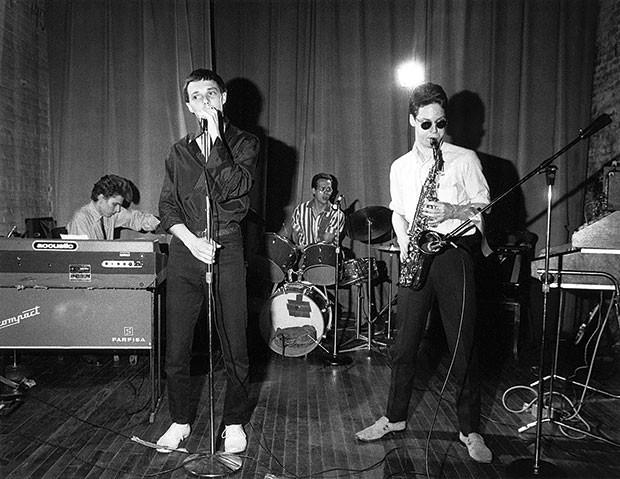 Perhaps no emotion is less punk than nostalgia. And despite its title, Non-Punk Pittsburgh, an exhibit at SPACE Gallery documenting the city’s underground music scene circa 1979-83, is pretty punk: all about sounds, looks and attitudes that were new here then, largely in explicit rejection of what came before. What happens when two charter members of that scene look back?

Dennis Childers was an artist and drummer in Carsickness, today considered the era’s signal local band. Childers’ co-curator, photographer Larry Rippel, was a key documenter of the scene. Non-Punk Pittsburgh includes more than 100 pieces, most of them large-scale images by several photographers, plus film, music videos and concert posters.

The exhibit captures Pittsburgh’s underground starting a few years after punk’s initial burst out of New York and London. And, “non-punk” indeed, there’s little here that looks or sounds much like the Ramones or the Sex Pistols (though you’ll spot T-shirts touting The Clash and X-Ray Spex). Mostly, it’s a bunch of arty, restless — and, you can’t help noting, overwhelmingly white — college kids in the last days of Big Steel and before the advent of cell phones, the internet, personal computers or even widespread cable, digging their own cultural escape tunnels.

The 90-some photos, mostly black-and-white, by Stacy Weiss, Childers, Rippel and others, depict bands like Carsickness, The Cuts and The Shakes playing everywhere from dingy clubs to outdoor gigs at Market Square (with cameos by Stiv Bators, Robert Fripp and Cyndi Lauper). Portraits, including a color series of Carsickness by Martha Rial, who later notched a Pulitzer for the Pittsburgh Post-Gazette, provide nice counterpoint. Curators Childers and Rippel also offer an array of carefully saved (if casually displayed) 8½-by-11-inch photocopied concert posters for shows at now-vanished venues like The Decade, Phase III, Charlie’s 10¢ Saloon (“Beer Cheap Before 11:00”) and The Electric Banana, the latter punk’s home base in ’80s Pittsburgh.

Five 1980 music videos help sketch the era’s sensibility. Found-footage videos for Carsickness tracks, including “Police Dog” and gear-shifting anti-KKK piss-take “Bill Wilkinson,” highlight Karl Mullen’s growling vocals and the band’s musical ambition alongside its political concerns. Two lo-fi performance vids by The Cardboards demonstrate why the new-wavey group was so popular here: Frontman Max Haste (a.k.a. Joe O’Lear) looks and acts like David Byrne in a button-up shirt and tie while declaiming as ironically as the B-52s’ Fred Schneider over a nervous beat, skittering synths and angular, honking sax lines. (“You’re the apple of my eye, but we cantaloupe,” he sings.) Also projected in the gallery is a reasonably sympathetic 1979 local-TV-news segment on those crazy kids and their “punk” music.

Still, the scene’s Rosetta Stone remains Stephanie Beroes’ 1980 short film “Debt Begins at 20,” a minimalist narrative built around real bands and real people, centering on Cardboards drummer Bill Bored (a.k.a. Bill von Hagen). The sound is murky (some dialogue is subtitled), but you get the picture: Bored’s trashed Oakland apartment, his trip to Jim’s Records, a make-out session, all leading to a Saturday-night party the Cardboards are headlining. Many cans of Schlitz are consumed; Reid Paley, soon to form seminal local band The Five, cameos; Max Haste sings, “Pretend your mind is a dress … you need a new outfit now”; and the singer for all-female band Hans Brinker and the Dykes sums up by yelping, “I want Pittsburgh to be fun … I’m bored bored bored.”

“Dress Up as Natives,” by Stacy Weiss

The performance-art angle worked by Hans Brinker, the Cardboards and others is notable. Like the mid-’70s Manhattan of Legs McNeil and Gillian McCain’s oral history Please Kill Me, and the Los Angeles of Penelope Spheeris’ 1981 documentary The Decline of Western Civilization, Pittsburgh circa 1980 had no codified way to be punk. Some bands played loud guitars, others quirky synths; some wore T-shirts and jeans while others glammed it up. Leather was minimal, mohawks unknown. In the liner notes for Get Hip Records’ fine new early-Carsickness compilation, no less than novelist Michael Chabon (who saw the band as a Carnegie Mellon undergrad nearly 40 years ago) accurately pegs Carsickness as post-punk.

Most rock thrives best on stage. So it is gratifying that this exhibit was complemented by a Carsickness reunion (with killer sets in April at both SPACE and Gooski’s), and by ongoing open jam sessions at the gallery, with drum kit, amps and PAs provided.

Indeed, for Childers (a longtime high school art teacher) and Rippel (a professional photographer), there’s more affection here than there is anything so gooey as nostalgia. Non-Punk Pittsburgh is straight period documentation, without even any interpretative wall-text. Instead, we’re left with moments, like those in photos taken at Phase III by Kevin Brunelle: The Shakes in full howl; The Cuts’ shirtless bassist sharing his mic with two sweaty fans; Hans Brinker and the Dykes, clearly having a blast, making a scene. And strongly implying you should go make your own.