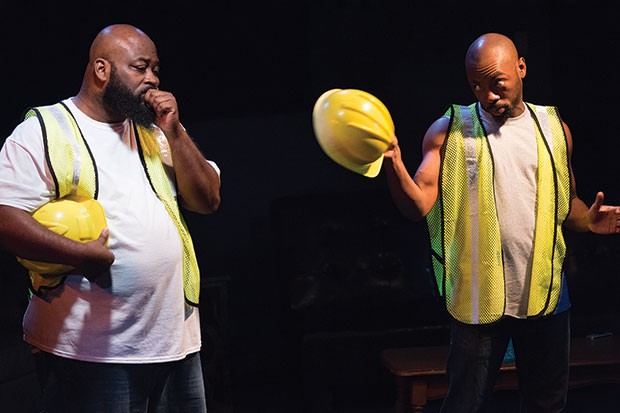 Photo courtesy of Gail Manker
Sam Lothard (left) and LaMar Cheston in Hercules Didn’t Wade in the Water, at Pittsburgh Playwrights
In the program bio for his play Hercules Didn’t Wade in the Water (now at Pittsburgh Playwrights Theatre Company), playwright and former Pittsburgher Michael A. Jones talks movingly about Hurricane Katrina, and places that nightmare squarely in the history of the cruel displacement black men and women have faced for at least the past 400 years.

It’s vital we never be allowed to forget what happened in New Orleans — and America — in 2005, and Jones’ play looked as though it would confront that memory head on.

Except that it really didn’t. Hercules opens with two men, Tupelo and Youngblood, trapped on the roof of a house as rescue helicopters buzz past. We quickly leave them, however, and travel back a year to Chicago, where we meet Tupelo and his girlfriend, Char, and their friends Maxine and Eugene. It’s these four we follow through the course of this 65-minute one-act play, only occasionally returning to New Orleans and the storm.

Jones has written a relationship play as the four navigate the various perils of coupledom. And while I certainly don’t mean to downplay their problems, Jones must know that nothing they’re going through is even one-tenth of 1 percent as dramatically compelling as a hurricane, specifically the lethal inaction of the Bush administration during Katrina. Ultimately, I think, Jones has actually written a TV script: the plentiful short, simple scenes, numerous locations and feel-good happy ending. Writing for TV isn’t a bad thing; it’s just that theater’s scope is wider than Jones, at least with Hercules, is prepared to utilize.

Director Wali Jamal keeps the pace within the scenes moving, but the repetitive black-outs after each scene only highlight the episodic, televisual nature of the script. Jamal works exceptionally well getting strong performances from his cast, with Sam Lothard and Lamar K. Cheston creating a rock-solid sense of friendship as Tupelo and Youngblood. Shaun Nicole McCarthy portrays Char as the warm heart of the play, and when given a chance to be vicious, Shanita Bivins and Corey Lankford, as Maxine and Eugene, are delightfully nasty.