“When I had this chance, I had to do all the things I believe are necessary.” 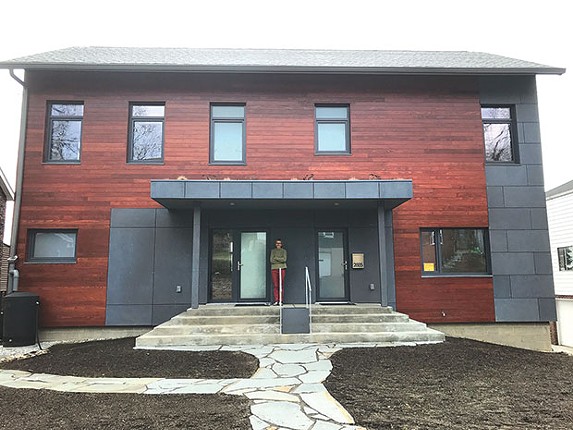 CP photo by Bill O'Driscoll
Lucyna de Barbaro on the front step of her new passive house, in Squirrel Hill

Lucyna de Barbaro and Ayres Freitas care deeply about the environment. They’re especially interested in how much energy buildings consume — about 40 percent of total U.S. energy use, a key driver of climate change. The married couple spent years studying how to reduce the environmental impact of houses. A buildable lot in Squirrel Hill let them put their knowledge into practice.

“When I had this chance, I had to do all the things I believe are necessary,” says de Barbaro. In February, the couple moved into one half of the sleek duplex they built: the first new-construction single-family passive house within city limits. A passive house is a high-performance building that minimizes energy use — to the point where it can be heated mostly by sunlight, and the warmth of the bodies and appliances inside — while maximizing comfort and air quality.

The couple is marketing the second duplex unit on their quiet street just off Beechwood Boulevard. The four-bedroom, 2,350-square-foot house, with 9-foot ceilings, hardwood floors and an integral garage, lists for $599,000. That’s costlier than average in the neighborhood, but energy usage could be one-fourth or less of the usual for a house that size. (Open houses for 2885 Fernwald Road are scheduled Sun., April 23, April 30 and May 14; the house is on the Green Building Alliance’s May 18 Passive House tour.)

The new house is the latest in a regional wave of buildings built to passive-house standards. Affordable-housing nonprofit ACTION-Housing built the first, a single-family dwelling in Heidelberg, in 2012. Others have included ACTION-Housing’s retrofit of a former YMCA as McKeesport Downtown Housing; ACTION’s newly built, multi-unit Uptown Lofts on Fifth; and a single-family retrofit in Shadyside by architect and local passive-house pioneer Laura Nettleton.

One big boost was a decision two years ago by the Pennsylvania Housing Finance Authority, which administers federal tax credits for low-income housing projects. PHFA began giving preference to projects built to passive-house standards. “It benefits the residents and it benefits us” because it keeps buildings affordable to occupy, says PHFA spokesman Scott Elliott. Of the 10 Pittsburgh-area projects PHFA approved last summer, three are passive, including multi-unit developments in Morningside, Mount Lebanon and Glassport.

“Pittsburgh is probably one of the five hotspots in the country” for passive buildings, says Brandon Nicholson, a founding principal of NK Architects, based in Pittsburgh and Seattle and the architect on the Morningside and Glassport projects. NK claims 21 certified passive-house designers and consultants, the most of any firm in the country.

The passive-house concept was born in the U.S. and perfected in Europe, re-emerging here in the 2000s. Buildings are highly insulated (with triple-paned windows) and tightly sealed. Heat-recovery-ventilation systems regulate temperature, humidity and air freshness. Sunlight is hoarded in winter and deflected in summer. Buildings built to passive standards need not pass the rigorous passive-house certification test to generate major energy savings.

Passive houses typically cost more to build than “to-code” houses, but sometimes by only a few percent; the price of insulation and airtight sealing is largely offset by the scaled-down mechanicals (no furnace needed). Companies like Pittsburgh-based Eco-Craft are even offering competitively priced modular passive houses.

Lucyna de Barbaro and Ayres Freitas worked with passive-house certified architect Erik Fritzberg, but over four years faced challenges including finding contractors familiar with passive techniques. De Barbaro ended up her own general contractor. The couple (both trained physicists) did a lot of the painstaking sealing work themselves, stained the long-lasting acetylated-pine siding, and cut and installed the exterior fiber-cement panels.

“It was a tremendous amount of work,” she says. The two units cost about $1.1 million to build. When the second unit, priced roughly at cost, sells, they’ll add solar panels. But even as is, de Barbaro says, she is very happy with the first home the couple, formerly renters, have owned in Pittsburgh.

“It feels very luxurious,” she says, adding, “Truly all homes should be built this way."