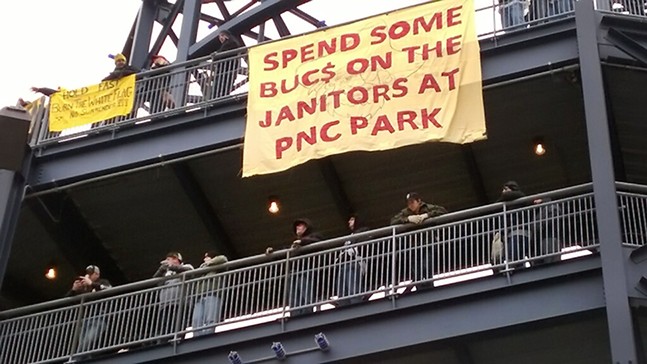 Photo courtesy of SEIU
Banner at PNC Park
Snow, rain and low temperatures weren't the only things casting a pall over today's Pittsburgh Pirates home opener at PNC Park. For months PNC Park janitors have been in contract negotiations with the Pirates organization, and today they hung a banner in the park reading "Spend Some Buc$ on the Janitors at PNC Park."

The janitors, who are members of 32BJ Service Employees International Union, are demanding $15 an hour in the negotiations. Janitors at PNC Park currently earn $12.37 an hour.

“We helped PNC Park become one of the nation’s top ballparks. It didn’t earn this accomplishment on its own. We work hard ensuring the stadium is maintained for thousands of fans that come to support the team each season. We have families and responsibilities, too. We are rooting for the team, but the Pirates organization needs to realize there are no winners if its employees aren’t earning a living wage,” said Clarence Thompkins, a porter at PNC Park, in a statement.

The Pirates are offering employees a 40-cent raise over the next five years. But according to a release from SEIU, the average wage of a Downtown commercial office cleaners is nearly $17 an hour.

“Unfortunately, the Pirates are notorious for their low player payroll, and now they want to lowball the cleaners as well and hold these men and women back from supporting their families and their communities. Taxpayer money goes to support PNC Park. Public subsidies shouldn’t support poverty jobs,” said Sam Williamson, Western Pennsylvania District leader 32BJ SEIU.

According to the U.S. Bureau of Labor Statistics, the $12.37-per-hour rate and the proposed increase put Pirates janitors in line with the mean hourly wage for janitors and cleaners around the country at $12.99 per hour.

The janitors' prior contract with the pirates expired in February. The Pirates have so far not responded to a request for comment.

“We have and will continue to negotiate in good faith with the representatives of this group of under 20 employees. Out of respect for our collective efforts and the ongoing negotiations, it is not appropriate to comment publicly on any details at this time.”