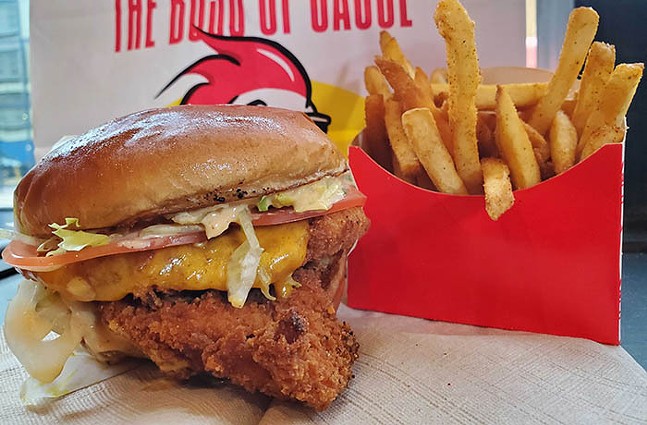 CP Photo: Jamie Wiggan
Classic Sandwich combo from Chicken Guy!
Rolling out a chain of chicken joints while branding yourself as a champion for off-piste, family-owned eateries is an inherently risky move. But, it’s a risk the gregarious celebrity chef Guy Fieri has gladly embarked on, and he’s now brought his Chicken Guy! franchise to Pittsburgh. So, how does it hold up?


The concept of an up-scale, fast-food chicken restaurant requires maintaining the essentials of speed and affordability while introducing some meaningful standard of quality. Take away any of these and its purpose evaporates.

This, in any case, is the rubric I set for Chicken Guy!, with the best possible outcome something akin to food truck standard and the worst to an overpriced KFC.

My first tasting attempt is rebuffed by an excessive line that no sane person should endure in pursuit of fast food. But it’s still the first week of business so let’s not hold this rampant popularity against them. I returned two days later at a deliberately awkward point in the middle of the afternoon. The wait is long, but acceptable given the lingering first-week opening hype.

I order the CG Classic Sandwich combo, which comes with fries and a drink. Yes, I know this concept emphasizes its chicken tenders and sauces but, to me, boneless chicken strips in batter are not a serious food for people over the age of 10. But throw them in a sandwich with the right balance of toppings and I’d take them over any of the pretentious offerings vaunted in the fine-dining world.

The sandwich is appealing and well-proportioned, with two fried chicken filets stacked between slices of fluffy golden brioche and padded out with a thick quilt of salad. A bite-size chicken protrusion shamelessly offers itself, so I snap it off to sample the main ingredient minus the palliative assistance of sauce and salad. 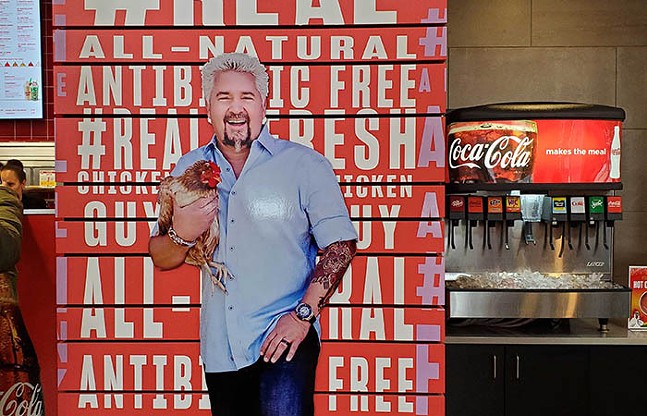 While superior to regular fast food offerings, the meat comes off as inescapably dry. Not stick-your-mouth-together-dry, but below what you’d expect for what's described in the chain's marketing as “tenders brined in fresh lemon juice, pickle brine, buttermilk, and infused with fresh herbs.”

The batter is crisp, and the seasoning is light but well-balanced — not excessively salty in the ilk of their competitors.

The next bite introduces a subtle slice of cheese, a layer of finely shredded lettuce, glimpses of tomato and onion, an ooze of special sauce, and two discs of airy bread, sweet but not cake-like.

This combination is far more satisfactory. The light tang from the mustard-based sauce cuts through without overpowering the mild chicken flavor and masks its underlying dryness. Texturally, the dense web of lettuce offers a crunchy counterpoint to the mushy masses of bread and meat. This is a decent sandwich.

Onto the fries. They’re served thin-cut — a little crisp on the outside and soft in the middle. They come by default coated in a house-made seasoning mix, modeled loosely on a Cajun spice blend but without much kick. The result is earthy with a lick of sweetness, but the balance feels a little off. My instinct is to say they’re too eager on the powdered garlic, but you should verify this with a real food critic.

I respect Chicken Guy for defaulting to something other than plain (which doesn’t appear to be an option for unadventurous diners), but the fries didn’t quite do it for me.

The pre-tax total for all this (including a fountain drink) comes to $12.49. Feels a bit steep for fast food, but pushes for fairer pay, and the forces of inflation mean the days of $5 fast-food meals are long behind us. For comparison, Burger King sells its chicken sandwich combos for $9.98. In this case, I’d say the extra $2.50 is worth it for a notably superior product that stretches without breaking the reasonable boundaries of fast food pricing.

Summing up the experience, the moderately dry chicken is the only notable sore spot. It’s one that could reflect the newness of staff in training, so I’ll keep an open mind that my next serving could be tender and succulent. If that pans out, I’ll give it a hearty endorsement. Until then, I’d rather say try it for yourself.