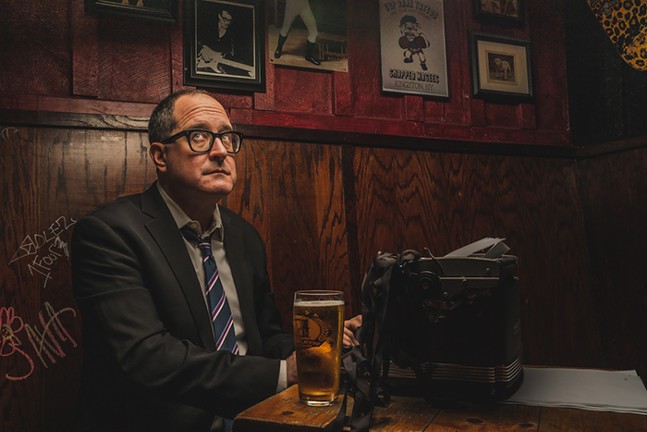 UPDATE: Shortly after this story was published, Craig Finn announced that all of his October dates are canceled and will not be rescheduled, due to a member testing positive for COVID.

Craig Finn is the lyricist and front man for the Hold Steady, America’s greatest sing-along bar band. But he’s got a side hustle as a solo artist and will play Club Café on Mon., Oct. 17 with the Uptown Controllers.


Pittsburgh City Paper caught up with Finn to hear about his new record A Legacy of Rentals, his memories of Pittsburgh, and what writers shaped his take on the world.

Can you give me your take on a burning local issue: Is Pittsburgh East or Midwest?
Pittsburgh retains a uniqueness that a lot of American cities have lost. Growing up in Minnesota, I considered it East, but that’s from a Midwesterner’s perspective. Living in New York for the past 23 years, I now understand why there’s a question, but I’d still say East.

Do you have any particularly vivid memories of playing Pittsburgh?
The first time the Hold Steady played, there was at an art gallery. Karl Hendricks, who was kind of a local legend, asked us to come out. I was familiar with his records and honored and flattered that he got in touch with us. But the show in this art gallery was incredibly hot. After the show, I ran out to get a Gatorade, and these guys rolled up in a car and said, “Hey Craig, do you want to go see Pittsburgh?” For two and a half hours, they drove me over all these great bridges and showed me the Iron City brewery. It was a really cool way to see the city. I got back and everyone’s, like, “Why aren’t you packing up your gear? You just disappeared on us.” That was my first Pittsburgh show and it’s a sweet memory.

The other one that comes to mind was on a solo tour. We had a Halloween show at Club Café and needed to come up with a costume. We all like KISS, but we really only like Paul Stanley, so we came up with the concept “All Paul.” We were all in KISS makeup, but we were all Paul Stanley.

You are just getting back from a run of European shows. Has solo touring changed since COVID?
I think the bigger difference was Brexit. There were a lot of challenges, especially when we went to Dublin in the middle of the UK tour, and had to re-route things because of complications affecting travel between Europe and the UK. But the UK’s always been really good to us, and I have a lot of friends there, so it was a joy. We tacked some mainland European gigs onto the front, as well. So I’m tired but also elated.

How does A Legacy of Rentals reflect where you are now, twice as old as so many of your protagonists?
The title Legacy of Rentals is a personal joke, in that, when the pandemic came, a lot of my friends and bandmates started buying houses. I didn’t. So that’s the little joke — is my legacy a legacy of rentals? Am I someone who’s weightless, someone who’s floating through? But I see part of that as a commitment to being an artist, to keeping my footprint light so I can move with my art.

The songs start out from a place that’s a little quieter, a little more mundane than Hold Steady songs. I’m able to take on people’s lives that are more unremarkable. The people in them are further along in their lives, trying to figure out how they got there and where they’re going and why their expectations haven’t always been met. They’re smaller people and these are smaller stories.

Every record is like marking your height against a door. As we get older, our height might not actually change, but our emotional perspective changes, and so every record does that. A specter of death haunts this record because I lost a few friends when I was writing it. I thought about what we leave, and how we carry the stories of the people we love with us, to tell both others and ourselves.

Your songs seem to come from a hipster strain in American literature. Can you talk a bit about your literary influences?
I always have read fiction, so at first, it was like whatever was around. The things that really turned me on in high school were the classics—Kerouac, Hunter S. Thompson, Tom Wolfe, that kind of stuff. Now, a lot of it is just the literary stuff that lots of people read. Philip Roth. Richard Russo. George Saunders. Tom Perrotta. I love Denis Johnson. Right now, I’m reading Young Mungo by Douglas Stuart, the Scottish author who wrote Shuggie Bain. I also like Dennis Lehane, George Pelecanos, the hard-boiled stuff.

What can Hold Steady fans expect from a Craig Finn show?
The show leans into the poetry of the songs and some of their quiet, character-driven moments. I always say to the band, “I’m in a big rock band, with the Hold Steady, so this doesn’t need to be that. This needs to connect with some other parts.” We also just changed our support act for the North American dates. It’s Katy Kirby, who’s a great songwriter, and I’m just thrilled because I’m in love with her music. It’s going to be an amazing show.