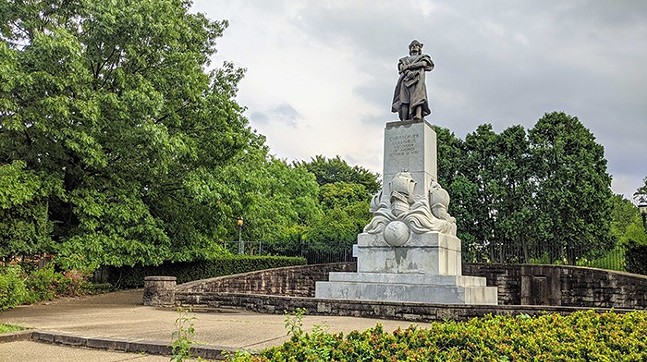 Following a series of public hearings led by the art commission, city officials opted in the summer of 2020 to remove the statue of the Italian-born navigator whose reputation is now widely associated with the legacy of slavery and colonialism. But their plans were held up by a legal challenge from the Italian Sons and Daughters of America, which claimed the processes the city used to arrive at the decision were unconstitutional.

Following two years of legal wrangling, a judge has now sided with the city, pointing to a 2009 U.S. Supreme Court opinion affirming its right to "government speech."


"Privately funded monuments placed in public parks represent government speech, and that a specific government’s right to their speech is accountable to the public through the election process,” wrote John McVay, a common pleas judge in Allegheny County, in a Sept. 30 memorandum outlining his ruling.


McVay goes on to suggest further appeals or challenges would be unlikely the bring a different outcome.

Maria Montaño, press secretary for Pittsburgh Mayor Ed Gainey told Pittsburgh City Paper the administration is "looking into our options and reviewing the opinion before announcing any next steps in regards to the statue."

Pittsburgh was led by Gainey's predecessor Bill Peduto when the decision was made to remove the statue in September 2020. In a press release announcing the move, Peduto, who is of Italian-American descent, suggested the statue should be displayed in a private location under the stewardship of the city's Italian-American community.

Reached for comment, lawyers representing the Italian Sons and Daughters of America did not immediately respond.
© 2023 Pittsburgh City Paper