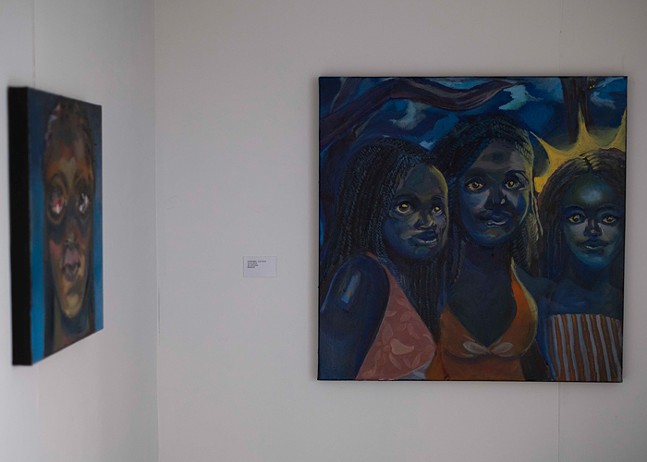 CP Photo: Jacob Blumenstein
"In Moonlight" by Shori Sims, part of Dream of a Black Planet

Dream of a Black Planet features four oil paintings by Shori Sims, an interdisciplinary artist who recently graduated from Carnegie Mellon University. Sims explores the intersection of Blackness and identity, and these paintings– all made since their BFA and on display for the first time– do so in an Afro-futuristic vein.

Now on view through Sat., Aug. 6, in a repurposed shipping container serving as the Pittsburgh Creative Corps Gallery, Sim's new paintings act like windows into an alternate future, where Blackness and Black people thrive, unencumbered by white supremacy. The paintings do this by breaking with realism — in one painting, "In Moonlight," a woman finds this autonomy in space. She looks out towards the viewer with casual deference, shrugging off her proximity to the galaxy that's delicately rendered over her shoulder.

However, these paintings aren't dwelling on any sort of fantasy. Sims said in an interview that their recent work looks to the future while reflecting on the violence of the past, as well as the intergenerational trauma that it has inflicted. This duality is evident in "Loord," a portrait of a woman whose right eye reflects a terrifying moment of cacophony. The bright red flames evoke onslaught, and who's to say if it's a memory or a premonition? 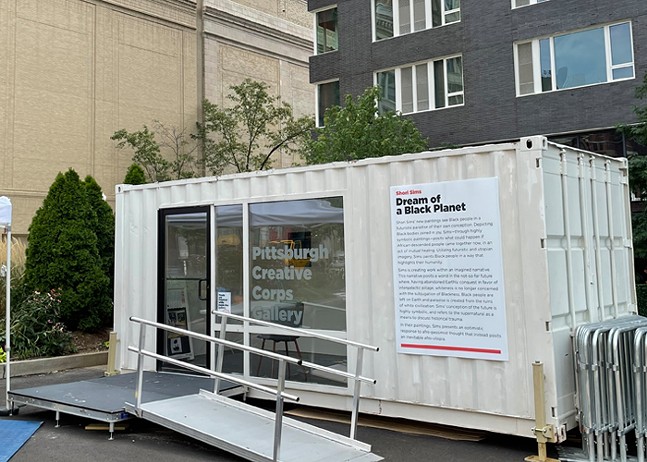 CP Photo: Jacob Blumenstein
Pittsburgh Creative Corps Gallery in Downtown Pittsburgh
Perhaps the greatest painting on display is "In Moonlight," a tender scene in which three women stand together beneath wriggling tree branches and a haunting sky. Everything is cast in a deep, dark blue, yet the women seem unfazed, even smiling a little. A bright, sun-like halo peeks out over one of their heads, and its yellow shine illuminates their faces, twinkling their eyes, in such a subtle, yet moving manner.

Sims specifies that they are interested in Black-feminist Utopia. "The story is about women," Sims says. "Men exist, but are not pictured." One of Sims' goals as an artist is "enriching" the Afro-Futurist archive. They said that while making this work they were reading Toni Morrison's Beloved and were influenced by the novel's interplay of abundant nature and violence. Sims also cites Basquiat, Yoshimoto Nara, and Frida Khalo's use of symbolism as influences.

These days it often seems that the world is ending in ten ways at once, and that cynicism is the only common ground. Previously, Sim's art focused on interrogating the political within the personal. It is then a bold act of determination for Sims to shift their gaze toward the future, and to look forward with such radical hope. It may well be the most appropriate way to respond. Because how will a better world ever be built if nobody dreams it into existence?
Dream of a Black Planet. Continues through Sat., Aug. 6. Pittsburgh Creative Corps Gallery. 8th St. and Penn Ave., Downtown. Free. opapgh.org/events
© 2023 Pittsburgh City Paper