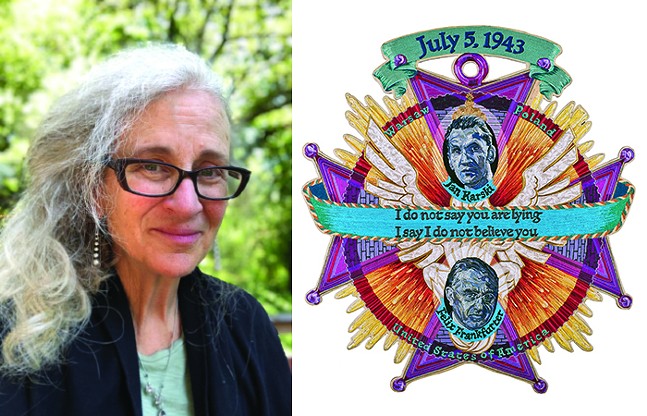 Photo: Courtesy of Fiberarts Guild of Pittsburgh
Robin Bernstein and her work, “I Do Not Say You Are Lying, I Say I Do Not Believe You”

A quick glance at the Beauty & Terror series by artist Robin Bernstein may register as a straightforward emulation of elaborate crests or logos from a bygone age. A closer look suggests that they are actually fiber paintings constructed from brightly colored threads woven into evocative images.

Both would be wrong, however. The 18 works are actually created using a long, painstaking process where thousands of tiny pieces of cut string are pressed into a bed of wax and brushed onto cut plywood. Rather than represent a family or brand, the works depict the violence and horrors of the Holocaust, as well as the courageous figures who tried to stop it.

One of the Beauty & Terror paintings, “I Do Not Say You Are Lying, I Say I Do Not Believe You,” is part of the Fiberart International exhibition on view through Aug. 20 at Contemporary Craft and the Brew House Association in Lawrenceville. As part of its mission to elevate textile art, the show’s organizer, the Fiberarts Guild of Pittsburgh, partnered with the Holocaust Center of Pittsburgh to present two special events allowing Bernstein to discuss her practice and technique.

Bernstein, an artist and educator based in the California Bay Area, partly attributes Beauty & Terror to her own upbringing as a Jewish person whose family came to the United States at the turn of the 20th century to escape the pogroms in Russia. She recalls that her relatives rarely if ever discussed the event that saw the mass genocide of Jews across Europe by Germany’s Nazi regime.

“I don't know if I lost family in the Holocaust; chances are that I did,” says Bernstein in a phone interview with Pittsburgh City Paper. “But I have a Jewish education. I mean, I went to public school, but I went to Hebrew school and I was bat mitzvah’d, and I was involved in my Jewish youth group. And I grew up without a solid understanding or knowledge of the history of the Holocaust.”

She partly attributes this to the years it took for Holocaust survivors to even address what happened to them. “I knew it was important, obviously, and, of course, I knew the mantra ‘never again and never forget,’” adds Bernstein. “But I didn't really know, it wasn't presented to me.”

This, coupled with the startling prevalence of Holocaust deniers she found on the internet, pushed her to create Beauty & Terror. She recently finished the series after 13 years, as each work took anywhere from four to six months to complete.

Originally a wood carver, Bernstein was exposed to the string and wax technique during a trip to Oaxaca, Mexico. She explains that it comes from the Indigenous Huichol people, who “make yarn paintings as part of their spiritual practice.”

“And I was overtaken by it,” she says. As she began to experiment with the craft, she says she started using smaller and smaller pieces of string rather than yarn so that she could “get more detail.”

“[M]y interest in the Holocaust and my exposure to Holocaust history was rising at the same time, and it just seemed like a very powerful match,” says Bernstein.

She says Beauty & Terror covers “a range of aspects about the Holocaust, including the camps and the raids and death marches and such,” as well as “redemptive stories or acts of resistance.” She points to “I Do Not Say You Are Lying, I Say I Do Not Believe You” as an example of the horrific event’s more redemptive stories. The piece features the visages of Jan Karski, a Polish resistance fighter and diplomat, and Felix Frankfurter, a former U.S. Supreme Court Justice. The title comes from a response Frankfurter reportedly gave after Karski tried to warn him about the atrocities happening in Poland at the hands of the Nazis.

“He was like the messenger. He was like a Cassandra,” says Bernstein, referencing the prophetic Greek mythological figure. “You know, he's telling, he’s warning, he sees what's happening, and isn't believed.”

To help expand on her presentation, taking place Thu., July 28 at Brew House, Bernstein will be joined by Pittsburgh artist Marcel Walker, who works on the CHUTZ-POW! comic book series produced by the Holocaust Center of Pittsburgh. The series, like Beauty & Terror, also pays tribute to the heroic figures of the Holocaust.

Bernstein believes the string-and-wax technique, which she will demonstrate during a workshop on Sat., July 30 at Contemporary Craft, allows her to create visually stunning works that deceive their devastating subject matter, as explained in an accompanying paragraph.

“So you're standing there, you're kind of overwhelmed by the colors and the numbers and images, and then you can read what the piece is about,” says Bernstein. “So it's not about repelling the viewer, it's about attracting them and bringing them in. So it's like you're using beauty as bait to bring the viewer in because if you do need to get your message across, you need your viewer to spend enough time. That’s my intention."