Play ball with first trailer for Pittsburgh-shot series, A League of Their Own | Pittsburgh City Paper

Play ball with first trailer for Pittsburgh-shot series, A League of Their Own 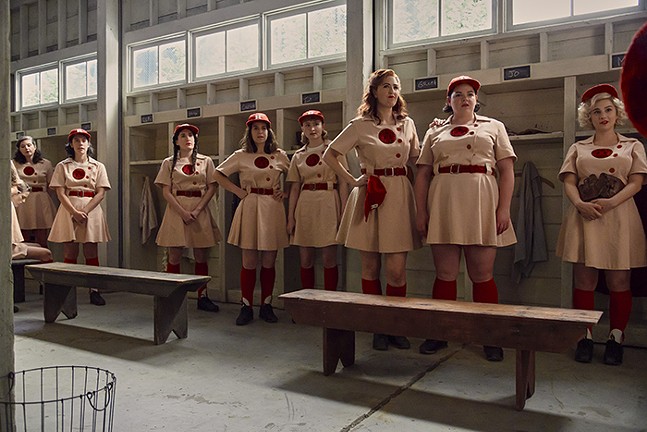 Photo: Courtesy of Prime Video
A League of Their Own
Perhaps Pittsburgh's reputation as a historic sports town attracted the makers of A League of Their Own, the new Amazon Prime series about an all-women baseball team that played during World War II. Regardless of why it was shot here, the first trailer has now dropped, giving a little taste of what viewers can expect when the series debuts in August.

The show is described in a press release as "featuring new characters and their unique journeys through a fresh reimagining of its predecessor," the hit 1992 film directed by the late Penny Marshall. The series features a stacked cast that includes Abbi Jacobson of Broad City, D'Arcy Carden of The Good Place, and Nick Offerman of Parks and Recreation. Most surprising is the reveal of Rosie O'Donnell, the comedian and former talk show host who starred in the original film and, over the past two decades, had largely retired from acting.


In addition to releasing the trailer, Amazon also announced that the series would premiere Aug. 12 on its streaming platform.

As reported by Pittsburgh Post-Gazette and other local outlets, A League of Their Own was shot around the Pittsburgh region during the summer and fall of 2021. Multiple locations were transformed to look straight out of the 1940s, including the scenes of the South Side, an Amtrak station in Greensburg, and a former industrial site in Ambridge that served as an old baseball field.

Gbemisola Ikumelo (left) and Chanté Adams (right) in A League of Their Own
A synopsis says that the series covers an entire generation of women who "dreamed of playing professional baseball, both inside the All-American Girls Professional Baseball League and outside of it."

The trailer suggests that the series will touch on themes from the film, as the women have to overcome misogyny and racism in order to play. The latter was barely hinted at in the film, but here, viewers will follow one of the main characters, Max (Chanté Adams), a Black woman who must find a way into the sport after being turned away by the all-white women's team. There's even the possibility that the series will feature a queer love story.
© 2023 Pittsburgh City Paper