Joe Wos' self portrait following his mugging in New Orleans

Joe Wos’ friends and family initially thought his Facebook account was compromised last week when he shared that he was “brutally attacked” and robbed in New Orleans through a post resembling a phishing scam for tricking loved ones into sending money. But a live video added moments later revealed that it was indeed the local cartoonist.

Instead of his normal smile and upbeat personality that's frequently seen throughout the Greater Pittsburgh region during appearances to promote his artwork and books, Wos posted a live video to show his friends it was really him, albeit a distressed version, featuring broken front teeth and his voice, visibly shaken from the previous evening.

While in The Big Easy for a library tour, the Pittsburgh artist, recently seen on WQED for his "How To Toon" classes, was attacked and robbed of his credit cards, ID, and phone by someone on a bicycle as he was walking back to his hotel after a night of revelry. The mugging led to the aforementioned broken teeth, along with a broken arm and wrist, among other injuries.

“Could be worse, I could be right-handed!” Wos says, adding that he can thankfully still draw, despite having a dislocated finger on his left hand in addition to his broken right arm. The day following his attack, he proved this by posting a self-portrait to his Facebook page, complete with band-aids, a sling, bruises, and missing teeth.

Now back in Pittsburgh after filing a police report, Wos shares how appreciative he is of the outpouring of support from his social media friends. But he says he could still use more help as he’s now facing unexpected medical costs and loss of income because of the mugging.

On the night of the attack, Wos was in shock and says he went straight to bed without tending to his injuries. After waking up and taking to Facebook to write about the occurrence, he received hundreds of concerned comments with offers of support. Now, he’s started a GoFundMe to help raise funds to help with medical expenses.

Thanks to a visit with a dentist in Oakmont the day after he returned to the ‘Burgh, he’s already gotten a new set of pearly whites. On Friday, he’ll go for surgery on his arm. He says he’s grateful he’s recently been hired full-time, teaching cartooning at Central Catholic High School, so he does have insurance, but he estimates that his out-of-pocket expenses will near $5,000. As of press time, he’s received about $3,500 of his goal, including a $1,000 donation from Franco “Dok” Harris, son of Pittsburgh Steelers Hall of Famer Franco Harris, who Wos says was one of the first to reach out to him after the ordeal. 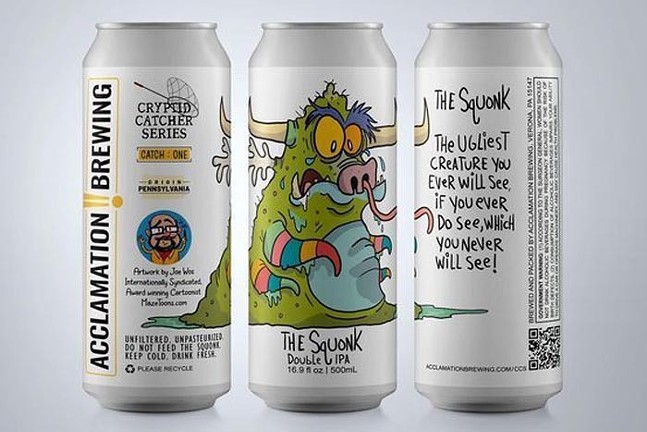 Photo: Courtesy of Joe Wos and Acclamation Brewing
The Squonk Double IPA from Acclamation Brewing
In addition to his medical expenses, Wos says he needs to take 20 days off to heal, which means he’s had to cancel upcoming book tour appearances and more, leading to a loss of income. Beyond supporting his GoFundMe, he says those wanting to help can purchase his artwork at Verona’s Acclamation Brewing, where Wos’ artwork of a cryptid “Squonk” character also illustrates beer cans.


But he also says he appreciates “thoughts and prayers” as well, adding that it’s going to be a long road to recovery, both physically and mentally. He keeps waking up from nightmares where he's falling, he says, and gets nervous at approaching footsteps behind him as he walks.

"I'm in a lot of pain," he adds. Still, he’s remaining optimistic and says he doesn’t blame New Orleans, a city he’s visited countless times. And he's kept his sense of humor intact.

The artist, who was once well-known locally for trolling former Pittsburgh Mayor Bill Peduto on social media for his support of bike lanes, and who once penned an op-ed declaring "enough about the bikes, bikes, bikes," laughs about a bicyclist once again being his downfall. But he has a message for others who have fallen: “Get back up.”