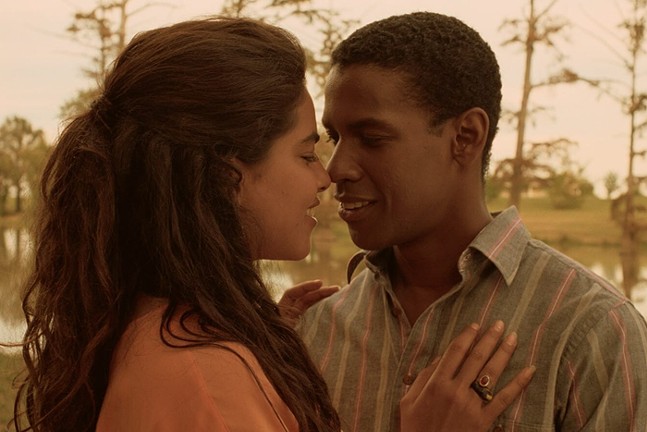 Photo: Courtesy of Janus Films
Mississippi Masala
In a 2002 interview with The Guardian, director Mira Nair spoke of how, when she arrived at Harvard as an Indian student, she felt she “was accessible to both white and black communities – a third-world sister to the black community and Kosher to the others – yet there were always these invisible lines.” It’s these invisible lines that stuck with her, and eventually led her to direct Mississippi Masala – one of her earliest films.

Starting Fri., Jul. 22, Harris Theater will re-introduce the 1991 film in the form of a new 4K restoration overseen by Nair and the Criterion Collection.

Mississippi Masala is – at least on the most basic level – the kind of swooningly romantic dramedy we rarely see anymore. Starring a luminous Sarita Choudhury in her very first role as Mina and a young and, frankly, very sexy Denzel Washington as Demetrius, the film follows their equal parts tentative and sweet coming together against the backdrop of rural Mississippi. And yet, for a film that is ostensibly a romance, it takes almost half an hour for the central couple to even meet.

The film begins in Uganda, the homeland of Mina’s family. Her father – though of Indian descent and culturally Indian – was born and raised in Uganda. (Indians were brought to Uganda by the British to act as essentially middle managers of colonization, something briefly explained in the film.) When British rule of Uganda ended and Idi Amin came to power, he expelled South Asians from the country under the claim of giving “Uganda back to ethnic Ugandans.” And it is in this world that Mississippi Masala begins, opening on Mina’s father pulled over by Uganda police after being thrown in jail for his refusal to leave the country in which he was born and calls home.

The camera scans the hills of Kampala as Mina’s father, Jay (Roshan Seth), looks out over them and weeps. It’s tempting to describe the green hills and blue water as being “lush,” but Nair shoots the scene with a low blue tinge so it already seems steeped with loss before Mina’s family has even left. This scene of Jay’s displacement haunts the film, even as the credit sequence shows the family’s journey to Mississippi, and the music moves from traditionally African rhythms to what we recognize as the liquid sound of African-American jazz.

We see Mina in a Mississippi Piggly Wiggly, flipping her dark hair and steering a cart full of milk. This is 17 years after her family emigrated to the United States to live with relatives who operate a motel in Greenwood. Her parents run a liquor store; Mina cleans rooms at the motel. It’s on the ride back from the grocery store that Mina meets Washington’s Demetrius by rear-ending him: a meet-cute, but in the form of an unexpected collision.

From the start, their relationship is charged with the kind of powerful attraction that really can only be produced by putting two very attractive people in front of a camera. They don’t even need to be in the same shot – the sexiest scene in the film is of a phone call between the two, each lying on their separate beds. They talk to each other with low voices and in various states of undress, with Nair breaking them down into the slightest gestures – Choudhury’s leg flexing and stretching against pale sheets, Washington’s hand creeping up his stomach.

And yet the simple tenderness of their romance doesn’t last. This is a movie, after all. When Mina’s relatives find the couple in bed together, one of them lunges at Demetrius and tells him to “leave our women alone.” The two are arrested, and the story becomes an item of gossip in the small town. A game of telephone ensues. A woman asks “Can you imagine dumping Harry Patel for a Black?”; Demetrius asks for Mina and is fobbed off; an older white man calls the motel and asks “Y’all havin’ n—r troubles?”; Demetrius’s ex tells him he’s let down his “entire race. I don’t see no shortage of Black women around Greenwood!”

Race is inescapable here, and not just the virulent anti-Black racism of Southern whites we easily recognize from the oversimplifications of history class. The film doesn’t shy away from the racism inherent in how Mina’s family treats Demetrius, or how Greenwood’s Black community seesaws between solidarity and suspicion with the town’s Indian diaspora. In this way, we see the American reflection of the conflict that begins the film – two groups that have been historically colonized and oppressed to varying degrees turning on each other, a hierarchy asserting itself in spite of shared experience or maybe because of it.

The problem with love is that it happens in the world as we know it: painful, stupid, contradictory, never one thing. Mississippi Masala is remarkable in that it doesn’t shy away from this fact; its central romance is always brushing up against its setting. But at the same time, Nair’s gives the palpable chemistry between the two leads its own weight. What could become an overly simplified Romeo and Juliet story is allowed to have integrity outside of the two leads’ circumstances. And, I suppose, that is what is remarkable about love too – it always happens regardless.
Mississippi Masala. Fri., Jul. 22. Continues through Thu., July 28. Harris Theater. 809 Liberty Ave., Downtown. $11. trustarts.org
© 2023 Pittsburgh City Paper