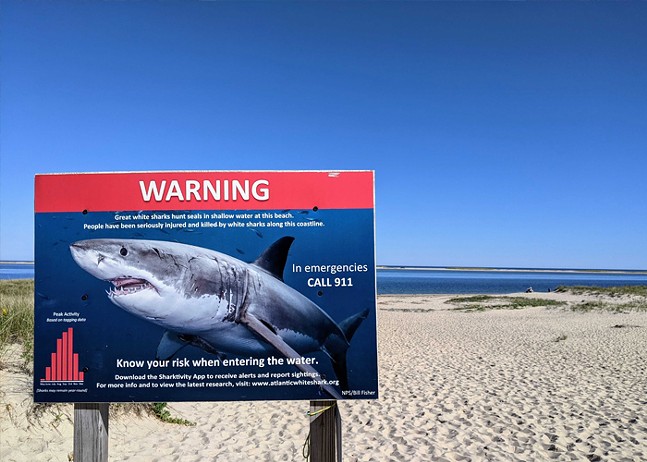 CP Photo: Amanda Waltz
Sign on a beach in Chatham, Mass.
Shark Week, one of the most anticipated television events of the year, works to not only entertain viewers but to educate them about the ocean's most stigmatized and misunderstood creatures. Now the week will serve another purpose as a tongue-in-cheek way to encourage people to donate blood. This especially applies to Western Pennsylvania, where it's desperately needed.

The American Red Cross and Discovery, the channel that produces Shark Week,  partnered on a campaign to encourage people to donate blood or platelets in July. The partnership will address the recent blood donation shortages Red Cross has seen in Western Pa. and throughout the country.

Those who give between Thu., July 21 and Sun., July 24 will receive an exclusive Shark Week T-shirt from Discovery, while supplies last. Anyone who donates in the month of July will automatically be entered for a chance to win an exclusive Shark Week prize pack that includes a beach bike, portable fire pit, paddleboard, kayak, and a $500 gift card.

A press release says that, in June, the Red Cross saw a "steep drop in blood and platelet donations," approximately 12% fewer donations than needed, and called it "one of the largest monthly blood donation shortfalls in recent years."

Red Cross adds that, in Western Pa., 1,164 fewer donations were made than expected.

Blood and platelet donors are being asked to make appointments now to "prevent a blood shortage this summer." According to a recent statement from Highmark Health, the months of June, July, and August are considered the "peak trauma season for hospital emergency departments," resulting in an increased need for blood donations.

AHN is part of a coalition of Western Pa. hospitals and health care systems that have come together to "raise awareness about the importance of blood donation and to urge more people to become blood donors as supplies remain critically low at hospitals across the region." The shortage has been attributed largely to the COVID-19 pandemic, which led to canceled blood drives and a "general sense of hesitancy among those who previously donated regularly."


Part of the coalition's efforts includes the creation of givebloodsavelives.org, a "microsite" that allows people to schedule blood donations with the Red Cross or the national blood bank, Vitalant.

In addition, the Red Cross also needs people to volunteer during blood drives. This includes serving as blood donor ambassadors who help greet, check-in, and thank blood donors. Volunteers can also serve as transportation specialists tasked with ensuring blood products are delivered to nearby hospitals.

Those interested in donating blood can find out how by downloading the American Red Cross Blood Donor app, visit RedCrossBlood.org, or call 1-800-RED CROSS (1-800-733-2767). The Red Cross will also encourage COVID-19 safety protocols during donations, including social distancing, wearing a face mask, and scheduling an appointment prior to arriving at a blood drive.


"Sharks are vitally important to the health of the planet," reads a statement on the Red Cross website. "Just like you play an equally important role in helping keep our national blood supply healthy and strong. So dive into donating; we won’t bite!"