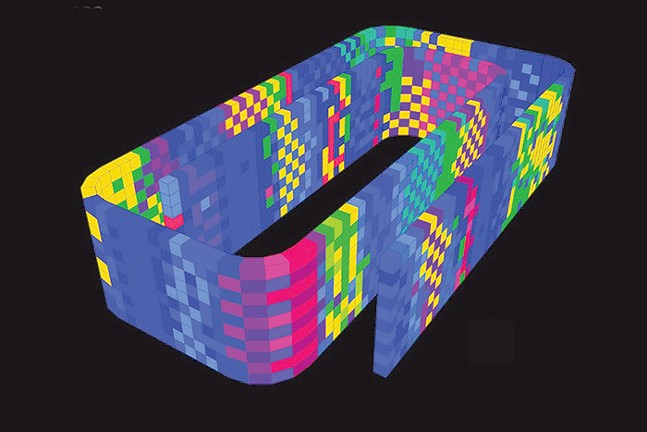 Stepping into Supply and Demand, the new exhibition by Pittsburgh installation artist Ian Brill, days before it’s set to open provides a compelling behind-the-scenes look at what’s to come. Spread across two floors of Wood Street Galleries, the two main pieces are still a mess of corrugated plastic sheeting, zip ties, and salvaged high-impact polystyrene, all handled by a small crew diligently working to complete the show.

“I still have several rolls from the same three to four tons of plastic that I picked up in a U-Haul from a salvage facility in 2014,” Brill says as he gazes at one of the surrounding pieces, a towering, white structure that, upon its debut on Fri., July 22, will burst into colorful light-and-sound displays much like those he designed for Spirit and other local venues.

While similar to those commissioned works, Brill sees the new show — which will feature the maze-like “Fast” and the arching splendor of “Impression” — as an evolution for him as a new media artist. He describes the show, as well as much of his other works, as trying to create a situation where “there is an infinitely expanding opportunity for people to make dissociative leaps.”

Brill, a New York City native, moved to Pittsburgh in 2001 just a few days before Sept. 11, as he recalls it. Over the past two decades, he made his mark producing works for shows and events across the United States, including in New York, Texas, and California. This is all in addition to the slew of pieces he has made for numerous Pittsburgh arts and cultural organizations and events. In 2021, he even collaborated with musician Clara Kent to create a multimedia show at Kelly Strayhorn Theater.

As preparations are underway for Supply and Demand, Brill points to plans taped to a wall, explaining how one piece will be a corridor meant to simulate a “broken thing of staples.” He also reveals how the challenges of the last few years, ranging from a serious bout with COVID-19 to battling a liver disorder, gave him a new perspective on life.

“[W]hen I survived COVID, I just decided to take my fucking life by the fucking horns and it’s been fucking non-stop,” says Brill, who, in the months leading up to Supply and Demand, has shown in Arkon, Ohio, San Diego, Calif., and in Pittsburgh with a display at the Lawrenceville-based bar Belvdere’s Ultra-Dive.

Supply and Demand came about, Brill says, after Pittsburgh Cultural Trust curatorial assistant Dave Zak reached out to him to do a show at Wood Street Galleries. Previously, Brill says he worked for over 10 years “off and on” as a new media specialist for Wood Street and other Trust galleries. He stepped away from the role in 2020, only returning in 2021 to finish co-curating the show This Sacred Thing for another Trust gallery, SPACE, the opening of which had been delayed by the pandemic.

Even as he looks to the future, though, Brill enthusiastically discusses his artform’s forebears. He expounds on how new media art has changed from the days of Korean-American artist Nam June Paik, who, dating back to the 1960s, integrated televisions and other electronic elements into his work, to it now focusing more on areas like experience design and video games. He talks about touring the world for three years as an assistant installing audiovisual work and doing technological support for his mentor, the renowned Austrian artist Kurt Hentschläger.

Supply and Demand marks but one project Brill has in the works. He points out his assistant Ryan Ellis, a University of Pittsburgh graduate who Brill calls “absolutely fucking brilliant.” The two met in 2019 during a previous show at Wood Street Galleries.

“I was applying for a grant at the time to see if I could put up an installation somewhere on Pitt’s campus,” says Ellis, who earned a natural sciences degree at Pitt in 2019. “So I was, like, ‘Oh, Ian, how do I do art?’ And he was, like, ‘Oh, I hate you.’”

The two men laugh before Brill explains that he didn’t want to see another artist experience the same hardships he had gone through in his career.

“This guy just reminded me of my younger, skinnier self, that was, like, switching out of physics at Pitt and that had ruined several relationships trying to be an artist when maybe I could’ve done something more practical,” says Brill, adding bluntly, “But also, I didn’t want the competition.”

Brill admits that he feels like he has grown since that initial meeting, and, in addition to other duties, hired Ellis to do “really, really advanced programming stuff” for him. He also hints at Primer Industries, a project through which the two will work together as business partners, and Brill promises it will be “absolutely unbelievable.”

“Expect your minds to be blown,” says Brill.