The sanctuary of the decommissioned Calvary Church in Turtle Creek is full of bicycles. They lean every which way against the pews and are crammed into any open space.

Why do they need so many bikes? Because they’re giving them away for free.

Red Lantern Bicycles is a volunteer-run organization, started by Brian and his wife Maria, that gives out refurbished kids' bikes (and brand-new helmets) for free, sells bikes for adults at low prices, and offers repairs for a nominal fee.

“We often do a big donation, like, we'll put out 60 kids’ bikes at a time or maybe even more,” Sink says, and then they invite parents to bring their kids over to Red Lantern to grab a bike. They also take donations of bikes for teens and adults, which they refurbish and sell at low prices. According to their website, adult bikes start at $35. They also repair bikes, for which they charge a small fee. “It’s very, very cheap,” Sink says, “but we never turn anyone away, so it's never a big deal.”

Around 2013, Sink began bringing bicycles to kids who needed them by pulling bicycles out of the trash in Braddock, where he lived at the time, and donating them to Free Ride Pittsburgh, a bike repair collective in Point Breeze. With the help of Braddock Redux, Lt. Gov. and Democratic senate nominee John Fetterman’s nonprofit, Red Lantern acquired a shipping container in which to store and repair bicycles and started operating in Braddock.

After several years in Braddock, Red Lantern moved to its current Turtle Creek home in 2021. The building was formerly home to The United Calvary Church of Christ. Brian and Maria put up the money for a downpayment on the church and are hoping to crowdfund the rest of the purchase through their GoFundMe.

“About a half dozen of us, roughly, kind of keep this place afloat,” Sink says. “It's all volunteer. That sounds cool until you realize we all have jobs.” Brian manages Riverfront Park in Aspinwall and Maria works for the Allegheny County Health Department.

A thrift store that’s been open since the 1970s, and where no item costs more than $2, came with the church, Sink says. Although the church’s congregation had dwindled to the point where it no longer made sense to operate the building, they made plans with the Sinks to keep the thrift store running after the church changed hands. The bike shop and the thrift store aren’t open at the same times, and they don’t share volunteers, but Brian says he’ll sell you a shirt if you really want. 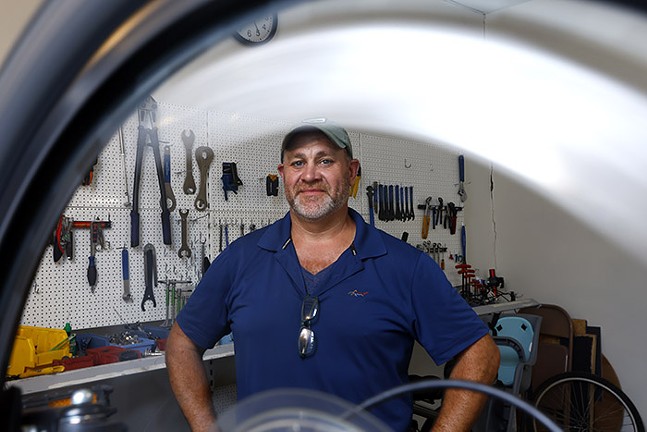 (Hot tip: Sink shares that, since the store’s clientele tend to be older, “You'll walk in and there will be like 10 pairs of, like, Vans and Chucks and stuff that at regular thrift stores will disappear instantly.”)

Kelley Kelley, whose second term as mayor of Turtle Creek ended in 2021, is thrilled about Red Lantern’s decision to relocate to the borough, which is located about 12 miles southeast of Pittsburgh.

“I was just so excited because we don't have anything like that in Turtle Creek,” she tells City Paper. “What they do is just wonderful. I mean, how can you not like an organization that gives free bikes to kids?”

Kelley says she met Maria through a Turtle Creek park rehab project that Maria was working on in her role at the health department. “Maria and I just hit it off from the get-go, and we became friends. She told me about what she and her husband were doing over in Braddock with the Red Lantern bike shop, which I thought was amazing. Of course, we had some old bikes and donated some bikes and did that kind of stuff. So our friendship kind of grew from there.”

Kelley and her husband often lend Brian and Maria their pick-up truck to move bikes around, she says. When they lived in Braddock, Sink says they borrowed Fetterman’s truck.

“They've been just such a great partner, and for Turtle Creek, too,” Kelley says of the Sinks.

But one challenge associated with Red Lantern’s new location is that Turtle Creek, like much of the Mon Valley, is very car-oriented, making the streets inhospitable and potentially dangerous to cyclists and pedestrians.

The community is striving for greater walk- and bike-ability, Kelley says, although it’s a long-term effort. “There's a lot of work surrounding bringing a bike trail through the area,” she adds.

Sink agrees that the area could use a bike trail. Until then, though, he suggests using a combination of a bicycle and a Pittsburgh Regional Transit bus.

“You can take a bus [from] here with a bicycle, right outside the door here, and you can end up down in Oakland, and then you can ride from there or go Downtown and you can go elsewhere.”

“You get people on bikes, that’s a good thing,” he says.