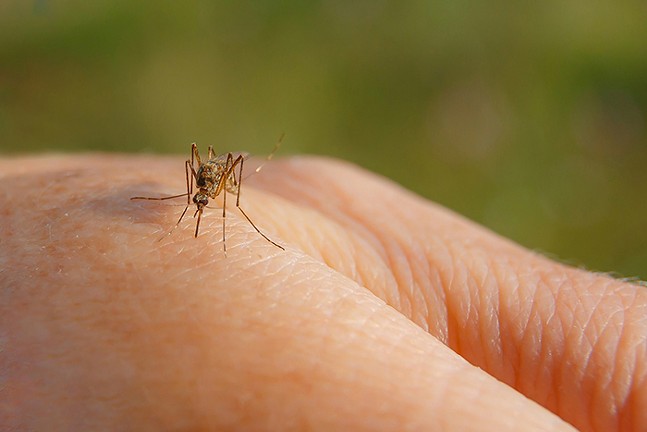 The county health department yesterday announced that mosquitoes collected earlier this month in Point Breeze, the North Side, and Wilkinsburg Borough have tested positive for the West Nile virus.

If it seems like these announcements happen often, that’s because, according to ACHD Deputy Director Otis Pitts, state funding for West Nile virus mitigation requires the county to notify the public whenever it detects the virus in area mosquitos.

ACHD spokesperson Neil Ruhland tells Pittsburgh City Paper that the county has been testing mosquitos for West Nile virus since 2002, and “more often than not, most mosquitos test negative for the virus.”

Although only 20% of people infected with the West Nile virus develop symptoms, the health department notes, symptoms can include fever, headache, body aches, vomiting, diarrhea, or rash and that less than 1% of infected people develop a serious illness.

The health department suggests a few simple ways that county residents can help mitigate the risk of West Nile virus:

“Residents can greatly reduce the mosquito population by eliminating and treating breeding sites on their own properties,” says ACHD Director Debra Bogen. “Mosquitoes can breed in as little as ½ inch deep stagnant water, so be sure to pay close attention to potential breeding sites like stagnant water in tires, unused swimming pools, buckets, and clogged gutters.”

The West Nile virus is endemic in the Allegheny County area now, says Pitts, but it is seasonal and the severity of each season depends on factors including the weather patterns, rainfall, and average temperatures along with the effects of mosquito control efforts and source reduction, such as the ACHD’s catch basin program.