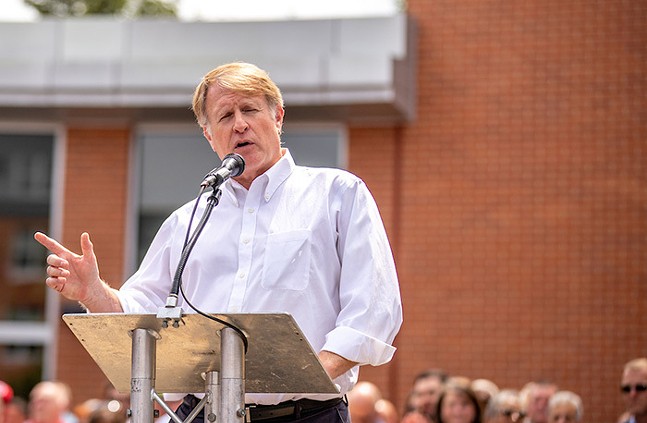 Fitzgerald announced the vetoes during a press conference on Wednesday morning, where he defended his environmental record and voiced support for a subsequent bill he said would supersede the newly enforced fracking restrictions.

Fitzgerald criticized the public parks bill as "political theater” which he said could be overridden with a simple majority vote even if his veto fails. Council approved the bill in question on July 5, where multiple residents spoke out in a show of support. Its language prohibits the county from entering leases on county parks for commercial or industrial uses.

Supporters of the bill point back to a 2014 agreement permitting drilling under Deer Lakes Park near Tarentum, which drew public backlash at the time.

Fitzgerald defended his record on Deer Lakes during Wednesday's conference, where he claimed the park surface was not disrupted by activity that took place on adjacent land and several thousand feet below the park.

“Even during that production, nothing came on to county parkland, nothing was disruptive,” Fitzgerald said.

"If these companies all get painted with a broad brush, you know, if we did that around things like gender, or ethnicity or sexual orientation or race," he said. "That's not the way we do things."

Fitzgerald said a new bill he supports is currently awaiting release from committee, and would, if approved, create a new framework for future lease agreements on public parks where council, administration, and the affected local municipality would all have shared say on the terms.

Fitzgerald did not comment on the second veto during his conference, but released copies of his letter to Council President Pat Catena, where he argues extending council’s role in approving executive hires contradicts the language of the home rule charter.

The underlying bill, also passed last week, grants council effective veto power over director-level hires. It was introduced in the wake of public grumblings over steep raises granted to several senior county staffers over the past three years.

Fitzgerald, in his veto, criticized the law on constitutional grounds.

“Council’s role in establishing a departmental structure through the passage of the Administrative Code does not give it the power to approve of the directors of those departments or any other executive branch employee,” Fitzgerald wrote.

Council has 30 days to attempt to override the vetoes, which are dated July 5.

Catena told Pittsburgh City Paper he plans to call a special meeting within that time, and expressed frustration with Fitzgerald’s delay in publicizing the vetoes.

“I find it kind of ironic for the county executive to wait till 6:01 p.m. [on the night of a meeting that began at 5 p.m.] to announce the veto,” Catena says.

Unless Fitzgerald, or Catena — who supported both original bills before the veto — can drum up new support, council will override the fracking ban but will fall short in overturning the new rules on appointments.

“I’ll be having some talks with my colleagues over the next few days,” Catena says.