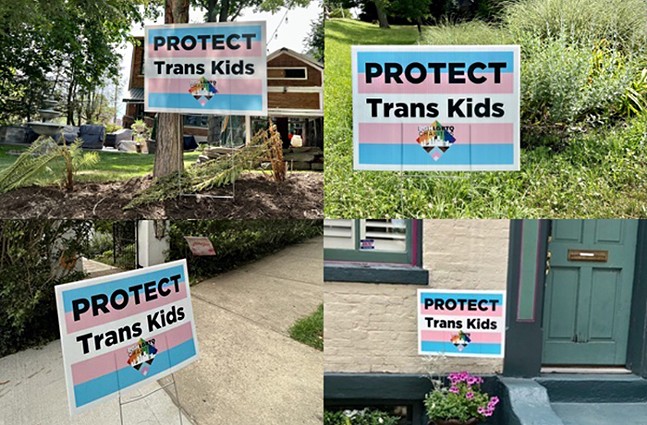 A local LGBTQ group is distributing yard signs to send a supportive message to transgender youth in the region after one local family recently pressed charges alleging their teenage daughter was targeted by transphobic slurs. The signs read "Support Trans Kids" and they have popped up across the North Side and are spreading throughout the city.

Demand for the signs soared over the holiday weekend, according to Sue Kerr, local LGBTQ activist and board president of the nonprofit spearheading sign production and distribution.

“We distributed 100 signs to North Side residents in a week,” Kerr says. “These are going up in residential yards, not public spaces — yet. That’s a literal sign of the degree of support trans youth have from their own neighbors.”

The signs were created in response to another sign hung from a neighbor's window, stating "Transing kids is abuse and homophobia." Sean O'Donnell and his family interpreted it as a directed hit against their daughter.

"We’ve seen signs up all over our neighborhood and the North Side," O’Donnell tells Pittsburgh City Paper.  "The support from the community has been incredible. We’ve been able to start a much-needed conversation with the signs.”

“The impact of dozens, then 100 affirming yard signs popping up almost overnight in our neighborhood is encouraging for us and other families with trans youth,” he says. “Our kids are eager to see where new signs pop up as we drive our typical routes to work, the store, and summer camp. They understand each sign represents a family, a household that truly values our family.”

Pittsburgh LGBTQ Charities is partnering with Commonwealth Press to design and produce the standard-sized yard signs. Kerr says they started with 50 signs, and requests continue to pour in. For logistical reasons, the signs won’t be mailed or shipped, but volunteers are available to make deliveries, and Kerr says drop-off spots can be arranged as needed. Pickup locations are currently available on the North Side, Swissvale, and Brentwood. They’ve launched a GoFundMe to subsidize the production of 500 signs.

As of early afternoon on Thursday, the GoFundMe has raised more than $3,200 from individual donors. Kerr says each sign costs about $12 to produce, and a batch of 50 signs is $580. There is no fee to request a sign, and donations help cover the costs for additional signs. This effort is not a fundraiser, Kerr notes, as all donations are going into producing additional signs.

“[Our daughter] Ke’Juan has asked PLC to use the donations to produce more signs and to invest in other efforts to protect trans and all LGBTQ youth,” says O’Donnell.

“Ke’Juan is determined that this never happens to anyone again, and it is her wish to spread that trans-positive message far and wide. To everyone who has posted a sign in their yard, thank you for turning Ke’Juan’s dream into reality,” says O’Donnell. “It is our hope that this support for the trans community — especially trans kids — will continue long after the magistrate makes her final decision. We encourage everyone to keep their yard signs up for all to see.”

“One sign in one yard is powerful, but watching five or ten additional signs pop up the next day in that neighborhood — it is like a garden blooming,” says Kerr. “We encourage other communities to invest in batches of signs to send a message of support to trans youth. Imagine the possibilities, especially in areas where elected officials support anti-trans legislation or school districts are struggling to provide safe learning environments for LGBTQ students. Even a handful of neighbors showing support for one of their own.”

To meet that volume, PLC organizers are seeking donors who can subsidize an entire batch of 50 signs and move them quickly into communities that want to participate. They are asking local companies, community leaders, neighborhood organizations, and elected officials to contribute alongside the individual donors.