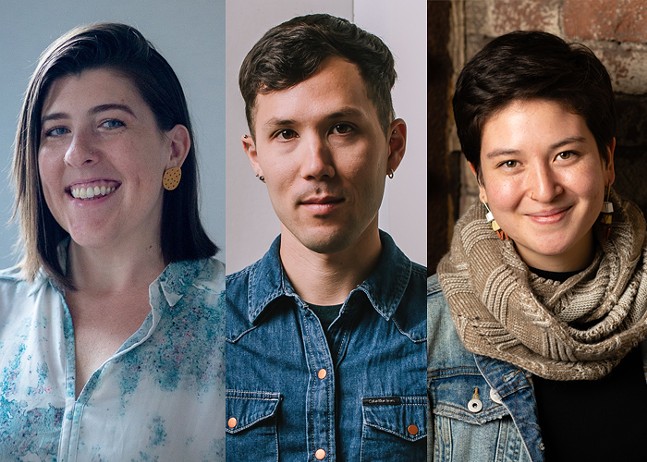 The Brew House Association has acted as a hub for artists, curators, and other creatives since it was founded in 1993 out of the former Duquesne Brewing Factory. Now the South Side gallery and incubator space will move forward with a new executive director and other staff equipped to help sustain its mission.

Brew House announced that effective July 1, program director Natalie Sweet was promoted to executive director. The organization also announced that Stephanie Garrison will see an expansion of her role as operations director and that Brent Nakamoto was hired to Brew House's newly created program and marketing coordinator position.

A press release says the promotions are part of a strategic planning process focused on "increasing staff capacity and talent retention." The Brew House board realized that its staff, comprised of only "1.5 full-time equivalents," was not enough to manage the day-to-day programs while "navigating the pandemic and simultaneously envisioning an aspirational growth plan for the organization."

As a result, Brew House decided that "increasing capacity and developing a budget and staff structure to match would be essential to maintaining organizational health financially and culturally."

Sweet, a New Jersey native who graduated from the University of Pittsburgh, originally joined Brew House's board in 2015 before being promoted to program director in 2018. She also served as the exhibition and program coordinator at Contemporary Craft.

As program director, Sweet is credited with founding Prospectus, the organization's curatorial development residency program, and fostering collaborations with local organizations such as Associated Artists of Pittsburgh, Women of Visions, Let’s Get Free: The Women and Trans Prisoner Defense Committee, and Evolve Coaching. Sweet is also cited as leading a fundraising effort that brought in $350,000 to support Brew House's "artistic programming and financial resiliency."

Sweet also curated Homecoming: Artists and Adaptation, the first exhibition to take place in Brew House's new 2,700-square-foot gallery after it re-opened in 2017 following a series of renovations.

In her new role, Sweet will continue to lead organizational fundraising efforts
and oversee the organization's artistic vision, as well as "refocus efforts on developing the exhibition program as vital support for a livable ecosystem for artists in Pittsburgh."

“It's been an honor to lead the artistic programming at Brew House Association for the last four years and to act as the steward of an organization with such a rich history of supporting artists,” said Sweet. “I look forward to continuing that in the future and developing my leadership practice alongside the growth of our organization.”

Brew House adds to a number of Pittsburgh arts and cultural organizations recently seeing transitions in its leadership. In April, Mattress Factory named David Oresick, former executive director and chief curator of the Silver Eye Center for Photography, as its new executive director. In May, Pittsburgh Ballet Theatre announced that its artistic director Susan Jaffe would, in December, be leaving for the American Ballet Theatre in New York City.

Sam Laffey, the recently elected Brew House board president and chair of the strategic planning committee, joined the board just a few months after Sweet became program director, and says it's been "wonderful to work with her and watch her develop her leadership skills over the last few years."

"Where she once leaned heavily on the board, she now embraces
confidence in her knowledge, passion, and abilities to lead this organization," says Laffey, adding that she was already fulfilling many of the responsibilities of an executive director. "I’m happy we can both acknowledge previous work and invest in empowering her leadership for the future.”

In addition to Sweet's promotion, Garrison, who has served as Brew House's part-time operations director since 2018, will see an increase in her hours. Nakamoto, a multidisciplinary artist who also serves as an adjunct lecturer at the Community College of Allegheny County, will support Sweet and take on more program-based marketing for the organization.

“We are really thrilled about the skills and experience that Brent is bringing to the team,” says Laffey.
© 2022 Pittsburgh City Paper