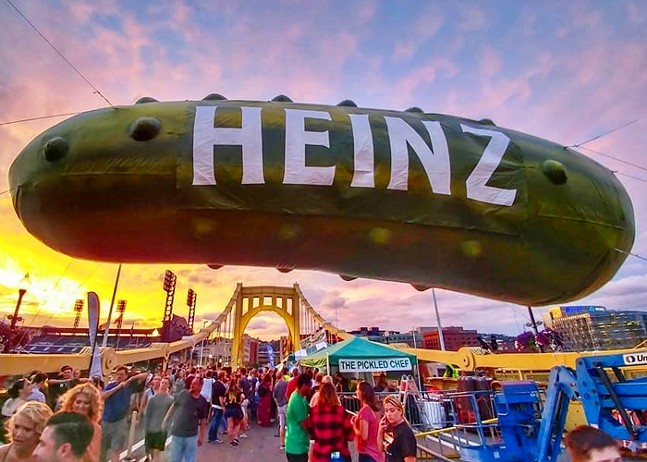 Photo: Courtesy of Pittsburgh Downtown Partnership
Picklesburgh
Long Play Cafe
5626 Butler St., Lawrenceville. longplaycafe.com
Described as the "Music Lovers Cafe," this new record store-meets-coffee shop has opened in Lawrenceville, so you can enjoy a classic espresso drink while browsing the aisles for your next favorite album.

Fish Fry in July
400 Cedar Ave., North Side. facebook.com/alleghenyelks
On Fri., July 8, there will be a fish fry at the Allegheny Elks Lodge on the North Side, so if you've been craving some post-Lenten eats, now's the time to indulge. Each sandwich comes with the choice of two sides: homemade slaw, homemade mac and cheese, stewed tomatoes, or french fries.

Drive-up Food Distribution
2200 California Ave., North Side. projectdestinypgh.com
On Fri., July 15 and Fri., July 29, Project Destiny will host a food drive in partnership with the Greater Pittsburgh Community Food Bank and Thrive. Those in need can pick up produce and pantry items at no cost, and no proof of residency is needed.

Con Alma
613 Penn Ave., Downtown. conalmapgh.com
From Fri., July 8-Sat., July 9, the Downtown Con Alma location will celebrate its one-year anniversary with a weekend of live music, great food, and drinks. The event will also celebrate Con Alma Shadyside, which recently switched to a fully plant-based menu, being in business for three years.

Valkyrie Doughnuts
601 Lincoln Ave., Bellevue. valkyriedoughnuts.com
Valkyrie Doughnuts is known for more than just fried dough, but they recently announced on Instagram that, due to a staffing shortage, they will be scaling back their menu to focus more on their donut game. That means no more empanadas, brownies, cookies, pies, or breakfast sandwiches, at least for a while.

Best Bites Lawrenceville
Multiple locations, Lawrenceville. bestbitespittsburgh.com
Get a tour of this neighborhood's best eats and drinks on Sat., July 30. You can choose from West or East tours, or do both for just $60 each. Visit their website for more information.

Picklesburgh
Rachel Carson Bridge to the 10th Street Bypass, Downtown. picklesburgh.com
Months after announcing its return, the specialty food festival Picklesburgh finally settled on a location, and revealed the full lineup of live music and food and drink vendors. From Fri., July 15-Sun., July 17, visitors will find tons to do as Picklesburgh takes over Rachel Carson Bridge at Ninth Street and expands to the 10th Street Bypass. Enjoy performances at the EZ Pass Main Stage and Pittsburgh Pirates Bridge Stage, speed-painting demos, and specialty cocktails and food, as well as the annual pickle juice-drinking contest. There will also be a Li’l Gherkins Kidsplay area for young attendees, and the new Pickles and Giggles Comedy Showcase featuring four emerging comedians. Additionally, from Fri., July 8-Thu., July 14, Taste of Picklesburgh will take place at more than 15 Downtown restaurants.