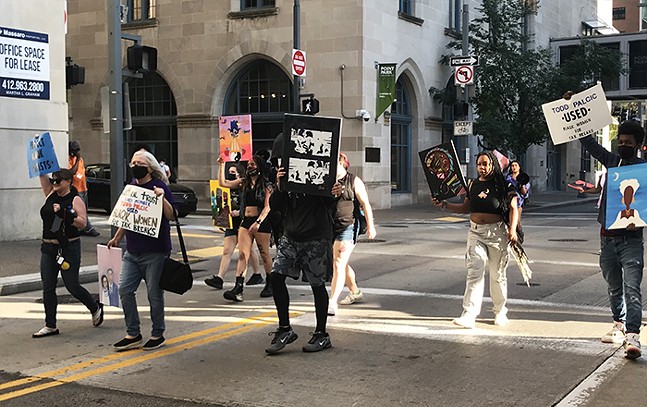 About 20 people marched through the streets of Pittsburgh on June 29 to protest the shuttering of a Black and queer-owned art gallery after 21 months in its Downtown space.

BLaQK House says Palcic unlawfully kicked them out of the space, locking them out on Juneteenth of this year. Dawson says that, as queer Black women, she and her business partner Cynthia Kenderson were especially offended by Palcic’s choice to do so on Juneteenth and during Pride Month.

Several days prior to the lock-out, on June 15, Palcic had filed suit in Allegheny County Common Pleas Court against Kenderson and Dawson’s LLC, NextPGH, arguing that the term of the lease had expired and they had refused to vacate the premises.

Dawson says that on June 19, gallery staff arrived at the building and found the doors glued shut. ”We were not able to access our house. ... There is essentially over $100,000 worth of artwork just in this space alone. And he hijacked that space,” Dawson tells Pittsburgh City Paper.

In a June 24 court order, Judge Daniel Regan allowed Dawson and Kenderson back into the space to execute previously planned weekend events and remove their property under the condition they paid Palcic $400 for a locksmith. Judge Regan also ruled that Palcic would take over possession at 5 p.m. on Mon., June 27. Dawson claims they paid but the locksmith never showed up and they had to hire their own. The gallery owners moved everything out on Monday with the help of volunteers.

“He's trying to essentially displace the Black, Brown, and the queer community in Pittsburgh. [BLaQK House] is the only staple of this kind for all three of those sectors,” Dawson says.

Palcic tells City Paper that leasing his space to BLaQK House was his idea, which he undertook “to help the African-American community artists after BLM protests.” He says he “disabled” the doors to the gallery space after Kenderson and Dawson repeatedly ignored his attempts to terminate the lease, and after receiving noise complaints from people living nearby.

A copy of the lease and one Notice to Quit that Palcic sent in February 2022 are included in the June 15 court filing. The lease shows a term of one year at the rate of $1 per month and a stipulation that the lease would automatically renew after one year, pending 90 days' notice of termination from either party. Palcic tells City Paper he found a blank, standard lease and sent it to Dawson and Kenderson to fill out themselves. Palcic says that he initially charged BLaQK House almost no rent with the understanding that after one year, both parties would negotiate payments closer to the market rate. The lease does not include a stipulation that they renegotiate the rent after one year.

Additionally, “[Palcic] has been viciously attacking us through texts, emails,” Dawson tells CP, accusing Palcic of intimidation beginning in April 2021. “It was threatening text messages and emails. And he started doing things specifically to our gallery, such as telling maintenance that they weren't to clean or stock our restrooms. So, since April 2021, we've had to supply all of our paper towels, napkins, cleaning supplies, and empty out, you know, the incontinence bag for sanitary disposals, things of that nature.”

Palcic calls this “an outrageous lie.” “The gallery idea was my liberal idea of a unified Pittsburgh,” he writes in an email to CP. “I just chose the wrong people. I bet I can find many other wonderful African-American artists to work with us without harming the tenants above.”

Both sides declined to show City Paper the correspondence in question.

“Once you get into the mud, it’s hard to tell which side is which,” Palcic’s lawyer, Maximilian Beier, tells CP in a phone interview.