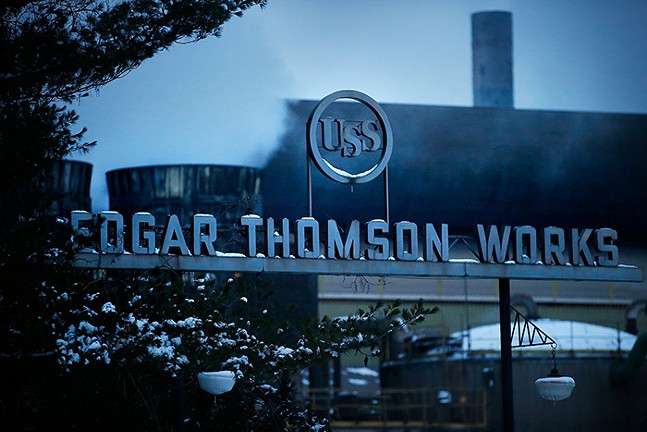 A proposed air quality permit that’s been two years in the making is dividing Mon Valley residents over whether the Edgar Thomson Works is primarily a source of good jobs or bad air.

The U.S. Steel facility in Braddock is the largest remaining blast furnace site in the region, producing around 2.9 million net tons of raw steel each year. Accompanying this output are hundreds of well-paying jobs, but also hundreds of tons of annual emissions like carbon monoxide, sulfur dioxide, and nitrogen oxide.

These competing stakes were the focus of an Allegheny County Health Department hearing on June 29 to gather public input before approving the new permits. About 80 attended, and 39 were listed to speak. 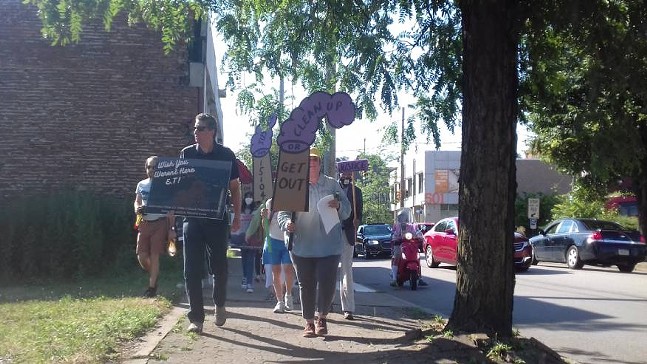 A small crowd of protesters assembled before the event and marched through the streets of Braddock brandishing signs with messaging including, “We wish you weren’t here E.T.” and “Get out or clean up.”

One of the protesters, Caroline Mendis, lives in neighboring Swissvale but has deep family ties to Braddock, where her grandfather was a Lutheran pastor.

Mendis says since developing amyloidosis of the lung several years ago, she’s become more attuned to air quality and its impact on breathing.

“It just made me very conscious of breathing like it never did before,” she told Pittsburgh City Paper.

While Mendis remembers her parents changing clothes during the day because they would become stained with the thick soot that once hovered over the Steel Valley, she believes the visibly cleaner air surrounding the region doesn’t necessarily mean all the risks have been similarly diminished.

Testifying later during the ACHD hearing, pediatrician Deborah Gentile said smaller invisible particles known as PM 2.5 particulates are in fact among the most deadly of manufacturing pollutants.

Many critics of the plant say these environmental and health costs don’t need to be the accepted price for ensuring good jobs, and they blame the corporation for failing to invest in its aging facilities.

“It's time to discard the narrative that it's necessary to poison residents so that steel workers can keep their jobs,” Braddock resident Edith Abeyta said during the ACHD hearing.

David Berthenthal of Greenfield argued similarly that U.S. Steel is exercising a choice not to invest more in the plant to reduce harmful emissions.

“U.S. Steel has the revenue to upgrade their plans, they just don't want to," Berthenthal said. "Their plan is to wring every dollar out of their decrepit plant at the cost of our health, including the skilled workers at the plants.”

The proposed permit calls for investments in pollution monitoring equipment and for a third-party study that may prompt further upgrades. Last year, U.S. Steel suddenly announced it was stepping back from a $1 billion plan to improve its emissions controls at the neighboring Clairton Coke Works, and instead scaled back its operations.

Mel Packer, a Pittsburgh resident and former steel worker, said this fits into a steady wave of disinvestment he’s witnessed since he first moved to the area, and which he said shows the company’s loyalties lay elsewhere.

“[U.S. Steel] is keeping dinosaurs operating with Band-Aids, duct tape, and piano wire, and it's lying to all of us about its future,” he told the health department.

Supporters of the plant, including Braddock Mayor Delia Lennon-Winstead, meanwhile say the terms of the proposed permit are too harsh and risk job losses that would harm the community.

“U.S. Steel is Braddock, and Braddock is U.S. Steel,” Lennon-Winstead said, testifying to notable decreases in visible pollution during her lifetime.

Others, including Mark Yezovich, a maintenance manager at Edgar Thomson, say the health department needs to give more concessions to U.S. Steel to ensure it can afford to keep up its payroll.

“These are our jobs, and we need these jobs in our community,” said Yezovich, who said he went to work in the mill after graduating from college because it offered the best employment option. “Therefore, I encourage you, the Allegheny County Health Department, to work in a more collaborative way with us still to work on a fair permit that doesn't discourage or jeopardize good paying, family sustaining jobs.”

Union president Michael Evanovich said the fact that workers like him can tolerate the conditions inside the mill for decades-long careers suggests the environmental impacts raised by the critics are exaggerated.

"There are people that have to go in there to work to make a living," Evanovich said. "They're not just living here, they’re inside the heart and soul of the mill, and if it was that bad, I don't believe they would keep their jobs.”

The permit negotiations closely follow a court agreement between U.S. Steel and environmental regulators that spelled out $1.5 million in fines against the corporation for a string of violations dating between 2014-2018.

The new Title V permit currently under consideration would set out the terms by which future violations and fines will be measured and enforced.

In an email statement provided to Pittsburgh City Paper, U.S. Steel accuses the ACHD for not working “collaboratively” with the company on the terms of the permit.

“We respectfully disagree with the ACHD’s creation of approximately 100 new emission limits that were not previously included in the existing Title V Operating Permit, any underlying installation permits, or that are otherwise required by any regulation.”

A statement from ACHD says the department will consider all public input before issuing a final permit to U.S. Steel.

"When the public comment period ends, we will evaluate and consider all public comments and then review the proposed revisions to ensure that the language is clear," according to the statement.

"The ACHD has made great strides at improving the area’s air quality over the past several years, but we understand that there is still work to be done. Our goal is to ensure that the final Title V permits issued for the facility will do just that, particularly for those who may be the most vulnerable, including the Mon Valley."

UPDATE: This story has been updated at 11:10 a.m. to include a response from the Allegheny County Health Department.