Criminal courts are supposed to be open to the public, and, technically, they are — but how many people have ever observed a criminal proceeding from beginning to end? The judges and prosecutors who take center stage are elected officials (or are appointed by them) who make decisions with huge consequences for public health and safety and racial justice. Yet there is often little oversight or community involvement.

Local advocates of transformative racial justice are trying to change this by expanding a volunteer-based court-watching program.

“Where is the accountability?” asks Autumn Redcross, the director of Abolitionist Law Center’s court watching program, which began a little over two years ago. The program recruits and trains volunteers to observe the everyday workings of the criminal legal system and report back what they see.

It was a volunteer court watcher who first informed the organization of Judge Anthony Mariani’s allegedly racist and abusive behavior towards Gerald Thomas, which led the organization to help his mother file a complaint against Mariani, according to William Lukas, ALC communications director.

In other settings, Redcross says, ALC court watchers have seen defendants actively withdrawing from methadone during their proceedings. And in one instance, a court watcher reported meeting someone who told them they were selling plasma to pay for their court fees.

“He was literally being asked for blood money in order to satisfy his court fines and fees,” she says.

“The benefit of court watching is that it puts people on notice. We always act differently when we know we're being watched,” she says. “And surveillance is such a huge part of policing culture in the first place. It only makes sense to have surveillance on those who surveil and who are appropriated as judges over my life.”

Court watch volunteer coordinator Joshua Palmer says the program has several dozen volunteers, but their availability to cover court sessions varies based on the time of year. They’re hoping to recruit more volunteers to expand the program and provide regular oversight to courtrooms around the county.

Volunteer court watcher Darya Kharabi, also a former digital marketing coordinator for Pittsburgh City Paper, says that one of the biggest surprises of their court watching experience had to do with courtroom culture.

They described feeling disbelief at how much standards of morality, empathy, and humor “are skewed within the courtroom,” recalling that once “I was watching traffic court, and the judge spent the whole time maintaining this witty banter in a side conversation with his clerks and the constable and cracking jokes all through the time I was watching, while he went through probably five to ten cases. Just continuing these little jokes… while putting out a warrant for someone's arrest.”

They say they were consistently disappointed by “the extent to which there was a complete and utter lack of understanding and recognition of people’s humanity,” which included watching one judge allegedly refer to a defendant as “the homeless one” and another “point and laugh at a man for not knowing why he was in solitary confinement.”

“The things that I witnessed [in court] that people laughed at make me want to cry,” they say.

Kharabi got involved with ALC’s court-watching program in January 2021, shortly after graduating from Carnegie Mellon University. An artist, Kharabi was drawn to a post requesting a volunteer sketch artist to produce images of people and events in the courtroom, since cameras are not allowed. 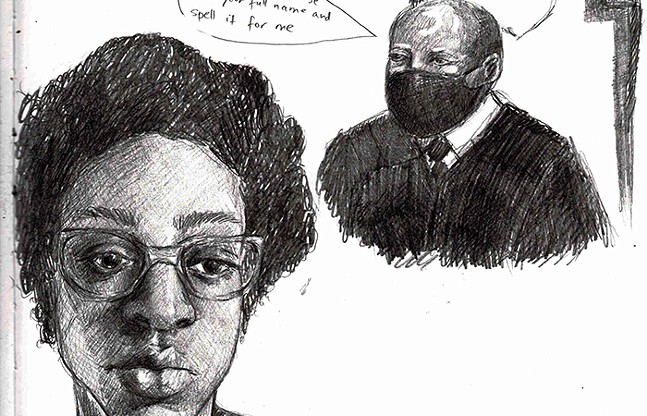 Despite the fact that many courtrooms are not always welcoming environments, some progressive judges, like Magistrate Mik Pappas, support citizen court-watching efforts.

"Judges should encourage the presence and growth of court watching programs because the transparency that they foster promotes public confidence in the legal system, and they enable citizens to exercise their constitutional right to observe, document, and report on court proceedings,” he writes to City Paper in an emailed statement.

Redcross says she sees court watching as an extension of the Civil Rights Movement. “When people did sit-ins, they basically, simply, and absolutely forced themselves into situations that were not welcoming of them in order to make a plea for equal treatment.”

“What about the community who these courts are working on behalf of? How can we be more involved? And shouldn't we be?” Redcross asks.

Anyone interested in volunteering as a court watcher should contact Joshua Palmer at admin@alccourtwatch.org.
© 2022 Pittsburgh City Paper