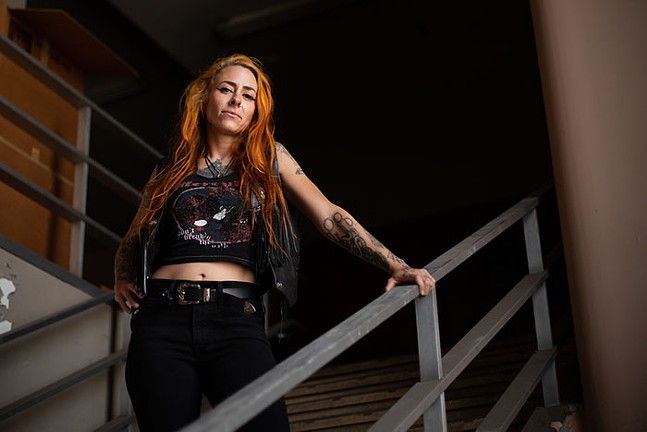 A few years ago, Deborah Levine was in Venture, Cali., enjoying the traditional heavy metal festival Frost and Fire with her fellow Lady Beast bandmates when it hit them: Why not hold an event like that in Pittsburgh?

“There's literally not even one traditional heavy metal festival on the East Coast,” says Levine, Lady Beast’s lead singer. “You have to either go to the Midwest, go up north, or go down south, but there was truly nothing for straight-up heavy metal bands on the east coast. As the saying goes, if you want anything done, you have to do it yourself.”

So Levine and her Lady Beast bandmates did exactly that. In 2019, the local heavy metal band hosted the first-ever Metal Immortal Festival, which returns for its second iteration this year. They invited their friends in the metal scene and bands from the ’80s to today for, as Levine put it, “a really awesome evening of heavy metal” at Mr. Smalls Theatre.

This year’s event, Metal Immortal Festival 2, takes place again at Mr. Smalls for an all-ages evening of bone-shaking high energy and good vibes. “There is no tolerance whatsoever for racism, sexism, or hatred of any kind,” says Levine. “It is a place for anyone that's into metal, or even not into metal, to be comfortable and be who they are.” A new addition to this year’s merriment is a preshow event at Spirit (21+) the night before for a reunion of Pittsburgh thrash legends, Eviction.

“We use both stages at Mr. Smalls. There’s food, there’s the courtyard so you can sit outside, which is great because the festival is no re-entry; it’s really the best situation that you can have in a venue,” says Levine. “And we have vendors throughout the whole event — art, jewelry, clothing. It’s really just a way to support hardworking bands and to support hard-working artists, which gives me no greater pleasure. This is something that we do because we love it and feel like it's important to bring it to our city. ”

For Levine, the upcoming second festival feels even sweeter than the last. For one, it’s been a long time coming, as Metal Immortal Festival 2 was originally going to take place in 2020 until COVID forced its cancelation. And this year, the Pittsburgh community has rallied to support the event. Vegan punk rock/heavy metal restaurant Onion Maiden, Millvale’s The Attic Records, local metal and noise record label Our Ancient Future, and Andrew D'Cagna of Ohio heavy metal band Ironflame are all sponsoring the fest. (This is a huge help financially; the previous fest ended in the red.) Plus, Grist House has created an exclusive Metal Immortal Festival 2 beer, which Levine says is “just another cool way to feel that support and love from the community.”

But Levine wants to emphasize that this isn’t a Pittsburgh fest. Instead, it’s a way to showcase underdogs and hardworking bands that may not have a label or touring opportunities in the oversaturated music industry, no matter where they’re located.

“We do like to give Pittsburgh some props, and we always start the show with a Pittsburgh band,” says Levine. “Vicious Blade is opening, who is a local up-and-coming thrash metal band. They’re female-fronted; more than half of the bands playing the festival and pre-fest are female-fronted heavy metal bands. It is extremely important to me to normalize women in metal so we can get away from using the term ‘female-fronted,’ and have it be more normal to have women involved in festivals and music.”

Other acts include the West Coast’s Soul Grinder, who will be making their first East Coast appearance, Bat from Richmond, The Accused, who will bring old-school punk vibes to the show, and headliner Raven, a classic heavy metal band originally from the UK.

“I grew up here; it truly feels like I made my mark,” says Levine. “Nothing feels better than the support and acknowledgment of a city that I've been in forever.