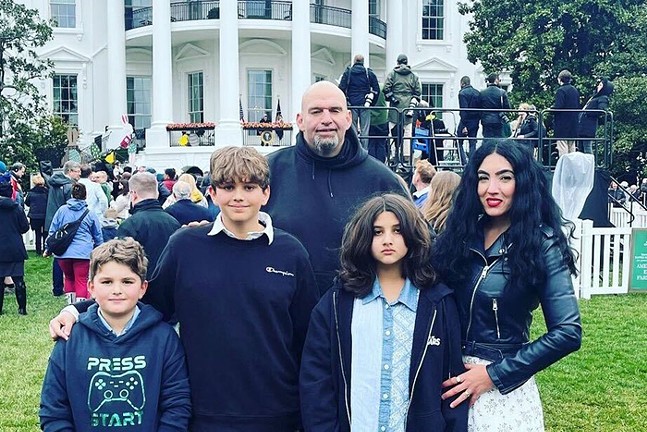 Photo: Courtesy of Gisele Fetterman
The Fetterman family
Gisele Fetterman’s unrivaled popularity has many wondering just how much this factors into her husband’s political success. During an interview with Pittsburgh City Paper, Pennsylvania’s second lady gave her own take but refused to take much credit for what she sees firmly as a family venture.


It’s time we get a definitive answer…

Let me know. Trying to prove something to G + the team. 👇https://t.co/AVBVeyWBcn

Still, the modest second lady didn’t deny her role in launching her husband’s social media presence as an inevitable outworking of her personal Instagram use that includes daily postings and story updates.

“You know, my family is mostly in Brazil, and Instagram was a way that I can see what's happening in their world every day, and they can see it in mine,” says Fetterman. “So Instagram, for me, was always the medium that I really loved. So I helped build that space for John, he never had social media until he ran for higher office. So I’m kind of making sure the world can see our world.”

Fetterman added that she and John have always been hands-on when it comes to interacting with voters during elections, and they use their social media channels to reinforce these direct connections.

“We've always done our own everything, our own Twitter or Instagram, it's always been run by us. You know, as the campaign grew, now we have people who can help us but from the beginning, it was always us,” says Fetterman.

For Fetterman, it’s important that people can see what she and her family are up to, and she values the connections she’s developed with Pennsylvania residents through social media.

“I think that’s really important, in being able to connect with people that were real people, real, real, normal families and I think that people really connect with that everywhere I go across the state,” says Fetterman. “We connect to someone who says, ‘Oh, my God, I love your social media. I'm sorry about Carl's shoulder’ or, you know, ‘I love Grace's new hair.’ It feels like a family anywhere we go in the state because we're so connected through social media.”

A liberal use of emojis has become a hallmark of Fetterman’s social media style. Acknowledging this, she said she believes they should be widely used by all.

“We have three kids who use emojis all the time. If you have to do a quick response, or you want to show some emotion, I think they're fun. And they should be used. I don't see anything wrong with using them,” says Fetterman.

Fetterman said their kids' input goes beyond sending emojis, but factors into all their political decisions.

“We’ve brought them to many political events. We don't want the kids to ever feel forced to be at them, so they come to things when that makes sense. But that's very much their life from when they were born or lived, it has kind of always been in politics,” says Fetterman.

During her interview with City Paper, Fetterman also talked about what it's been like to be the second lady of Pennsylvania and what legacy she wants to leave.

“The first thing I did is, you know, overnight, I wake up, and I'm the second lady, and suddenly everyone's calling me ma'am, which felt weird and not accessible,” says Fetterman. “And so I coined the phrase SLOP, that's where it came from, because I didn't like being called ma'am, all of a sudden, and SLOP I think made it not only fun, but it made it feel accessible.”

Fetterman, who cofounded local nonprofit 412 Food Rescue and the Free Store in Braddock, says she’s used her position as a platform to do something positive and work on things she cares about.

“I saw it as an opportunity to work on some, I think, important things. And I hope I've done that as my legacy these past four years,” says Fetterman. “But I think life changes constantly and you have to just adapt, and you have to figure out how you respond to what happens to you.”
© 2022 Pittsburgh City Paper