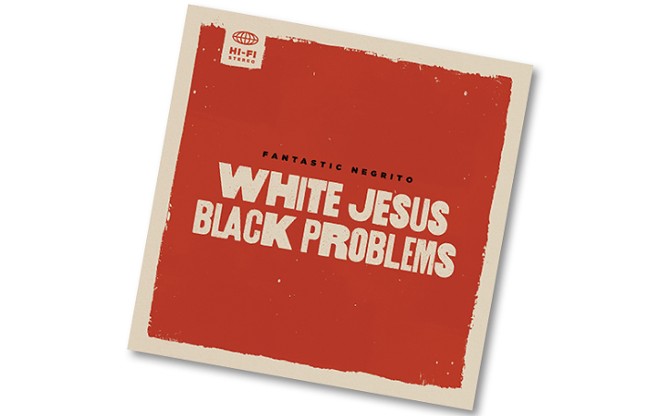 For years, I’ve played a game with the weather.

Every day, I decide if today will be one of the Top Ten Days of the Year. If I pick too many too early, there’s no space for later ones. It means a March day better be almost perfect, but a November day doesn’t have to be.

You never, ever play this game with Top Ten Albums — just wait until late November, then compare all of the year’s offerings. But what if you did? This year, I’d take a chance on Fantastic Negrito’s White Jesus, Black Problems. It all starts with the name: provocative thoughts mean he was thinking.

The first track sounds like Prince, The Beatles, and D’Angelo folded together. It’s a great start. Throughout the album, angry thoughts are enveloped in zaniness. When at work on radio station WYEP, they say to make sure that the presentation is fun. Negrito provides some space for seriousness.

So how does the album sound? At a Highmark Blues & Heritage Festival advisory meeting earlier this year, the team talked about him being in the 2022 lineup as a blues artist. I smiled, always having thought he was more funk than blues. There are elements of rock, blues, funk, and even some New Orleans on “Nibbadip.” Great harmonies throughout. I often skim through some album tracks while reviewing; this time I listened nonstop.

THE SOUL POD: In May, The Soul Pod invited Amy Kline of Dormont Arts and Shelley Johansson of AmeriServ Flood City Music Festival to offer tips for performer success. We came together for one more episode in June. It’s well worth the watch. Mike Canton is the longtime host and producer of The Soul Show on WYEP 91.3FM. He recently launched a syndicated edition of the program, now airing in four markets. Both are produced in his Electric Basement Studios. Canton is also a Pittsburgh-area voice artist.
© 2023 Pittsburgh City Paper