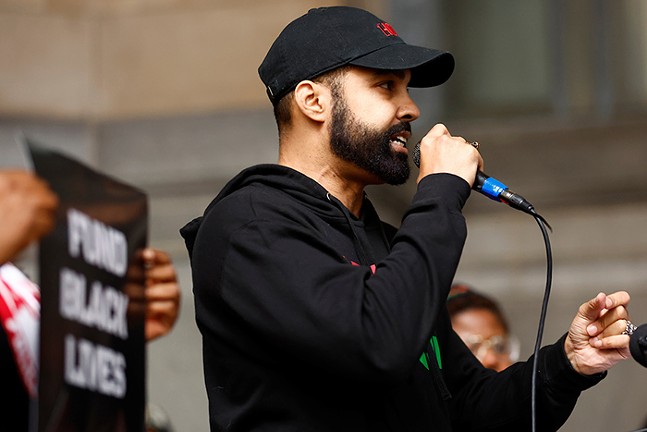 1Hood was one of 18 winning organizations out of 250 applicants seeking a share of the $100 million pledged by the Wallace Foundation to “foster equity and improvement in the arts.”

“My culture comes with me in everything that I do … so why put art over here and then education over here?”

The Wallace Foundation, a philanthropic nonprofit with a mission to "foster equity and improvements in learning and enrichment for young people, and in the arts for everyone," will release the funding over a five-year period and will also provide research and planning consultants to help 1Hood and the other winners align the money with their goals and visions.

Jasiri says bringing back 1Hood’s arts programming, which shuttered in 2018, remains a priority, but he also wants to build on this by creating career pathways for Black artists, who he notes are widely underrepresented in Pittsburgh and across the country.

“We’d like to really grow our platform to be a place where we can impact,” he says. “Particularly with the Black art scene in Pittsburgh.”

According to a press statement from the Wallace Foundation’s Art Director Bahia Ramos, this aligns exactly with the foundation’s goals for the programming.

“Historically, arts organizations created by and for communities of color have been overlooked and underfunded,” Ramos says. “We hope to support their vision, elevate their contributions ...”

1Hood Media was founded in 2006 by musician Jasiri X and other Pittsburgh activists concerned by neighborhood violence. The movement has since grown into a registered nonprofit with programming in social justice, arts, and education.
© 2023 Pittsburgh City Paper