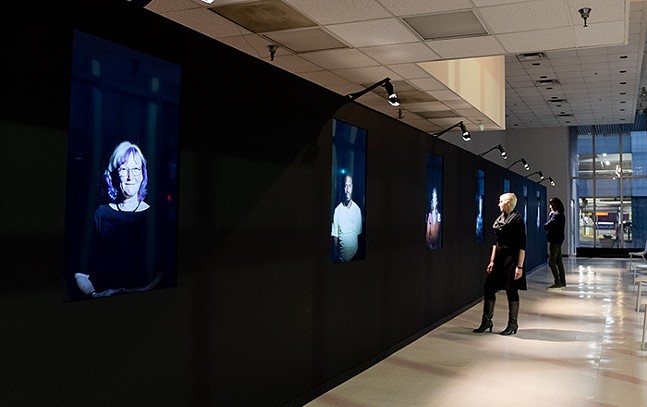 Running since April 8, People We Love is a montage of videos taken of ordinary people instructed to gaze at photographs of a loved one while listening to a guided meditation. All the participants are volunteers, and the pictures they used for inspiration are not revealed in the installation.

Until now, the exhibit inside One Oxford Center has featured only local faces, but the British artist behind the project, Kit Monkman, is about to import some subjects from his native country. From Fri., June 3-Sun., June 5, the exhibit will feature comparative footage of people from York alongside those in Pittsburgh.

Monkman says the thrust of the project is to capture the universal expressions of human love that transcend cultures and nationalities.

“‘People We Love’ is a work with global appeal; and the ability to read a loving human face is universal,” says Monkman in a press release. “Every face tells its own unique story, and each and every edition of People We Love speaks of, and to, its own community. That’s why I’m so excited for the people of Pittsburgh to see over 100 people from York in this setting, right alongside the people of the Pittsburgh community.”

Coinciding with the weekend expansion, organizations the Pittsburgh Downtown Partnership, Britsburgh and UK-based Mediale will host a free “international celebration event” at 320 Smithfield Street from 1-5 p.m. on Sunday. Light refreshments will be served.

Jeremy Waldrup, president and CEO of the Pittsburgh Downtown Partnership, says the exhibit has so far “revealed love and connection in a truly remarkable way that affects both participant and viewer.”

“The addition of the faces from another culture further underscores that love and emotions connect us, regardless of our geography,” Waldrup says in a press release. “We can all understand what it means to love and be loved.”People We Love International Celebration Event. 1-5 p.m. Sun., June 5. One Oxford Center. 320 Smithfield St., Downtown. Free. peoplewelove.online/pittsburgh-2022
© 2023 Pittsburgh City Paper