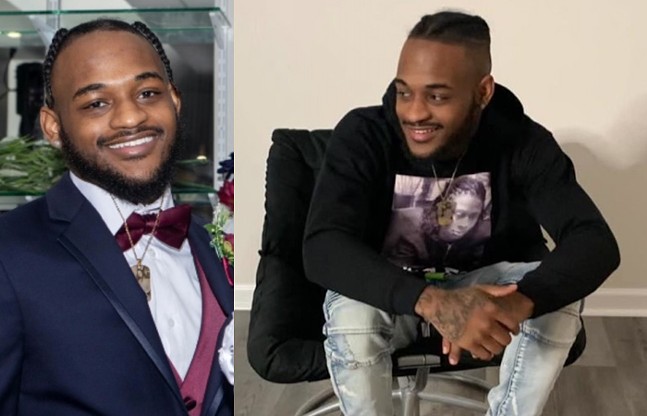 Photo provided
Gerald Thomas
The mother of a man who recently died in Allegheny County Jail has filed a complaint against the judge who sent him there, citing “rude, arrogant, and racist” behavior and “racially charged language” at a February 2022 hearing.

Juana Saunders tells Pittsburgh City Paper she was immediately struck by Judge Anthony Mariani’s unprofessional demeanor and that he shouted at her 26-year-old son Gerald Thomas and others throughout the hearing.

“His demeanor was very, very, very arrogant. It was very nonchalant. And it hurt … He attacked everyone in that room, pretty much, with his power,” she says.

Saunders, 48, entered Judge Anthony Mariani’s courtroom on Feb. 17, 2022 hopeful that her son could be coming home soon. The charges against him had been dropped. The court liaison officer from the Adult Probation Department, responsible for reviewing the probation officer’s report on the alleged violation and making a recommendation for how the court should proceed, recommended Thomas be released from Allegheny County Jail. Mariani, however, according to court transcripts, made it clear he favored sending Thomas to state prison, since he had been on probation at the time of his arrest.

“I’m looking at state prison for this young man who won’t quit embracing the gun and drugs street life,” Mariani said at the hearing. “I have to put you in the cage, lasso you, corral you, stuff you, because you won’t quit,” Mariani said.

Saunders says Mariani’s implicit comparison of her son to an animal through that series of verbs was a “racist dog-whistle.”

Mariani justified his decision to keep Thomas incarcerated using anecdotes about past defendants, including those from cases he hadn’t tried, who he said were killed shortly after being released.

“I'm tired of making ticky-tacky technical decisions and young men walking out the door and getting shot down in the street two months, three months later because they won't quit,” Mariani said at the hearing. “I would rather make a technical decision the other way, and at least he's alive.”

Mariani sent Thomas back to ACJ, and he died less than three weeks later of a bilateral pulmonary embolism after collapsing in the jail. A spokesperson from the jail says staff attempted to perform life-saving measures and he later died in hospital after being transported there by paramedics. They declined to respond to Pittsburgh City Paper’s specific questions about the incident, citing HIPAA privacy issues.

Saunders is asking the Judicial Conduct Board to file formal charges against Mariani for improper behavior.

“Judge Mariani made numerous assumptions about Gerald, including insinuations that he was a violent drug dealer, even though the most serious allegation against him was driving while in possession of a firearm,” Saunders said in her complaint to the state Judicial Conduct Board. “The jump from driving without a license while a gun was in the glove compartment to embracing a ‘guns and drugs street life’ is a big one, and sounds motivated by racial animus,” Saunders wrote.

According to the court transcript, Mariani also remarked that he was “surprised [Thomas] wasn’t driving something with 22s on it,” which Saunders says was “highly inappropriate and racist.” The judge was referring to wheels with 22-inch rims, which are often associated with drug dealers.

Saunders tells City Paper she thinks Mariani has been on the bench for too long. “He doesn't understand that he needs to look at these people as human for one, and individuals for two,” she says. “I think he's been on a bench for so long that everything kind of runs together, and he makes a mockery out of our people and also out of our judicial system.”

Mariani, who previously worked as an assistant U.S. Attorney and criminal defense attorney, was elected to the Court of Common Pleas in 2005. This is not the first time he has drawn criticism for his remarks, both inside the courtroom and out. Last year, a woman accused Mariani of victim-blaming her while he tried a case involving her sexual assault, saying he spoke “mockingly” to and of her.

Darya Kharabi, who has spent time observing Mariani’s courtroom as a volunteer court watcher for the Abolitionist Law Center, says Mariani routinely makes comments that Kharabi finds “egregious,” including making fun of the food and conditions at ACJ.

“He'll say like, ‘So-and-so, you're at the stand. How's the green bologna and cat food they're serving you?’” says Kharabi, who is a former City Paper employee.

Judge Mariani’s office declined to comment when contacted for this story.

While not the subject of the official complaint, Saunders tells CP she also wants Warden Orlando Harper to be held responsible for his mismanagement of the jail. Saunders tells CP that the jail did not inform her of her son’s medical emergency or his death and that Harper spoke with her for the first time 12 days after her son died. A spokesperson from the jail tells CP that the jail immediately notified Thomas’ emergency contact, who was not listed as Saunders.

"In addition, four members of Mr. Thomas' family arrived at the jail the day he passed and met with Warden Orlando Harper and other members of the administration," according to Jesse Geleynse, communications specialist at the Allegheny County Jail, who adds that Saunders was not one of the members of that group.

“Something really needs to be done about getting Warden Harper out of there. He’s not doing a good job in there, he’s allowing our humans to die. He’s starving them, no medical attention,” she says, referring to longstanding issues with the jail’s food vendor that include allegations of inedible food, “and they’re putting the medical attention in the hands of untrained, unprofessional correctional officers,” she adds.

Geleynse tells City Paper that "there is medical staff present in the facility at all times, and medical care is provided under the direction of AHN through a contract with the organization." He adds that "our correctional officers are extensively trained" and that "all incarcerated individuals receive three meals per day."

Although Harper has said the jail is adequately staffed, president of the Correction Officers union Brian Englert maintains that ACJ continues to be dangerously understaffed.

The Abolitionist Law Center, which was alerted to Mariani’s alleged “racist, abusive” behavior by a volunteer court watcher present at Thomas’ hearing, says Thomas’ family and “victims and survivors of Allegheny County Jail” will rally in Downtown Pittsburgh on Thu., June 2 at the City-County building “to call attention to both the ongoing crises of deaths and medical neglect overseen by Warden Orlando Harper, and the racist judicial misconduct deployed by local Allegheny County Judge Anthony Mariani.”

“I hold Mariani very responsible for my son’s death,” Saunders wrote in her complaint. “My son’s blood is on his hands.”UPDATE: This story has been updated at 4 p.m. on June 1 to identify that the person who was contacted by the jail after Gerald Thomas' death was his emergency contact and not his next of kin, as well as additional statements from the Allegheny County Jail.
© 2022 Pittsburgh City Paper