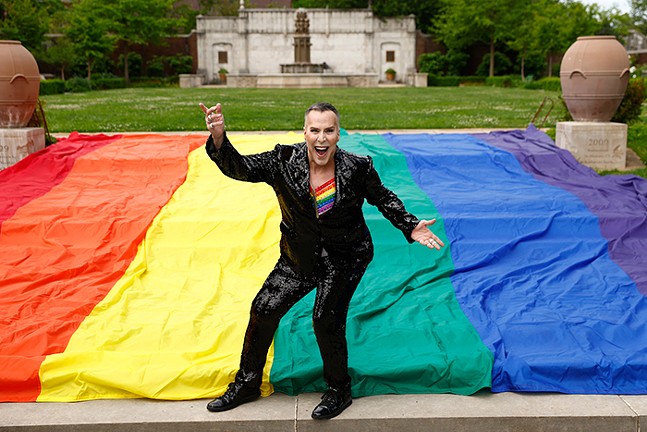 Following a few years of controversy after the dismantling of the Delta Foundation, which formerly hosted the largest Pride event in the city, King says the LGBTQ community and Pride "suffered greatly and sort of fractioned off." Now, the local icon will be helping to bring Pittsburgh Pride Revolution to the local LGBTQ community as its emcee.

From hosting a ’70s style game show, to performing at Kennywood in his earlier years, to being a close friend with the one and only Billy Porter, King’s life has always revolved around Pittsburgh. “You know, I love Pittsburgh in the fall. It's one of my favorite seasons,” he says. “I've always called it home and I've always, you know, no matter where I've been or lived, I’ve always sort of had a special place for the city.”

King says he’s watched the local LGBTQ community evolve over the years and holds great hope for the future of Pride within the area. For a city this size, he adds that having so many events this year, including Pride Revolution, People’s Pride, and Pride on the Shore, “shows progress, it shows promise that we can get back to where we once were with shutting down streets and having concerts.”

He says there is nothing stopping him from being Pride Revolutions’ emcee, not even a recent meniscus surgery.

And he’s been feeling that love since he first came out, back when he was a young man working at Kennywood.

King says he came out to his family after a breakup with a boyfriend.

“My family was noticing that I was not the same bubbly personality and my mom was really worried about me,” he says, “and both of my parents were working at the time, and they were divorced. And my mom called me from work and said, ‘Your father is bringing me home, and we would like to have a talk with you.’”

He decided to confide to his parents that he was gay, but King says he was sure it wasn’t a surprise.

“You know, I'm sure that they all knew because I was sewing,” he says. “Back then, when the Dazzler was the newest thing, I was dazzling just about everything that I felt like, that was sort of my thing.”

King's family in the end was supportive and continued to be there for him.

“For Christmas that year, my mom brought me a music box that played, ‘The sun will come out tomorrow’ from Annie, it was just the sweetest thing that she had ever done,” says King, “and they were so loving, and so accepting.”

Years later, King spreads acceptance throughout the city, including with his popular live show, The Match Gayme, which is loosely based on a ’70s game show.

He started the event on his own 14 years ago and he’s kept it going ever since. (One of his most recent shows was based on the popular show Schitt's Creek.) He’s taken his show to multiple places besides Pittsburgh, and he says it’s continued to evolve.

“So we've taken it out of the gay bars, and we've presented it for athletes from all over the world at the Gay Games in Ohio,” says King. “We presented it at clothing optional resorts in the summer, there are a couple of gay campgrounds in the tri-state area that we presented.”

It was there that King says he had his first streaker. “That's sort of like the ultimate badge of honor, to have a streaker across your show,” he says. “It didn't hurt that everybody in the audience was naked, but I at least still had a streak.”

He’s also had lots of good company. Over the years, he’s developed a group of dedicated performers for his show, which King says he can always rely on.

CP Photo: Jared Wickerham
Joe King, pictured with Richard Parsakian’s iconic LGBTQ flag
“You know, I've got some really dedicated performers who, if I say I've got a gig in West Virginia, I've got a gig in Ohio, you know, nine times out of 10, they will come, and if not, we're almost always able to find another local entertainer in those cities,” says King.

And he’s often been photographed with one of the biggest LGBTQ entertainers in the country, Billy Porter, who is a childhood friend. According to King, they have always been close.

“He's been my best man at my wedding. I've been best man at his. We've been childhood friends since we were young gaybies,” says King. “I'm the one that would, since I was a little bit more independent in high school and have my own car, I was the one that would sneak him out of the house.”

Porter was a friend King relied on in his younger years, and someone he still remains close to today.

“You know, we would, as young kids, we would drive the city, sneak into Pegasus when that gay bar was still here in Downtown. You know, we have very similar personalities. And I always say that he is the brother that I never knew that I needed, and a sister that I always wanted,” says King.

King adds that Porter usually stays with him when he’s back in town, and he accompanies Porter to award shows, including the Tony Awards, The Grammys, and even the Oscars.

“I'm sort of part of his entourage, and I wouldn't do this all the time,” says King. “I get to be a part of the celebration, without having to have done the work, but still get to celebrate with my friend.”
Pittsburgh Pride Revolution. Thu., June 2-Sun., June 5. Various locations. lgbtqpittsburgh.com
© 2022 Pittsburgh City Paper