CP Photo: Amanda Waltz
Paola Pivi: I Want It All at The Warhol
A millennial weaned on the early days of YouTube might find it hard to resist shouting “Oh my god, shoes!” when first entering the Paola Pivi: I Want It All exhibit at The Andy Warhol Museum. The Italian artist lined three walls with a diverse array of footwear (250 total pairs, to be exact), ranging from high-end brands to bright, furry UGG platform sandals, as well as Crocs, Converse, Steve Madden, and more. It took everything in me not to whisper aloud “These shoes suck. These shoes rule” as I inspected each pair, my brain apparently forever under the spell of Liam Kyle Sullivan’s viral 2006 “Shoes” video.

The commissioned project represents one way the multimedia artist connects her work to that of the museum’s namesake. An info placard says the piece, called Untitled (shoes), was inspired by Warhol’s involvement in the fashion industry and the “unique individuals in his orbit.”

In a release about the show, organized by José Carlos Diaz, chief curator at The Warhol, Pivi says she was “particularly excited about working with shoes,” adding that it brought her back to Warhol’s “fascination for shoes and for people.”

“He always had an intimate connection with the others he surrounded himself with, as if highlighting who they were and what they did, in a way that, in my perception, was voluptuous,” she says.

Still, the installation remains distinctly Pivi, as she matches individual pairs of worn donated shoes with unworn identical versions, “as a flashback,” she says, “to what it was before, and to what would have been without the lifecycle of each individual participant.” Each worn pair was donated by someone she met while traveling in Pittsburgh, Milan, Miami, and India. To that end, the work demonstrates themes found throughout the exhibit, that of trying to find or create meaning and beauty in mass production and sameness, as well as tired symbols.

Overall, Pivi operates in the realm of the fantastic, of possibility, asking audiences to view the world around them through a more vibrant and exciting lens. The penchant also defines her real life, as a born Italian choosing to live in Alaska, and as a former chemical nuclear engineering student who took a risk by deciding instead to pursue a career in the world of contemporary art. That decision paid off, clearly, as Pivi has opened numerous solo exhibitions around the world in countries such as France, Denmark, China, and Germany, as well as throughout the United States.

Her success should surprise no one who experiences I Want It All. Here, we see Pivi’s adventurous vision and earnest appreciation for what’s widely considered frivolous or gaudy. “Bigger than my eyes,” a pinwheel made of giant peacock feathers, constantly spins, serving as an odd, dizzying distraction in a gallery otherwise occupied by what could be best described as velvety bed sandwiches, and a miniature reproduction of the famed Warhol couch located in the museum’s lobby.

Altogether, this display evokes a sense of childlike wonder. The couch makes for a perfect little doll-sized twin to its larger counterpart, even down to the visible signs of wear and tear, making one wish there was a tiny Warhol stretched out across it. The two beds, comprised of individual, brightly colored mattresses stacked on the floor and suspended from above, leave small spaces for visitors to climb in (while wearing protective gloves and booties, of course), bringing to mind Hans Christian Andersen’s fairy tale The Princess and the Pea.

When not inviting you to squeeze into the artwork, Pivi unleashes the powerful force of nature on the viewer. One of her prints, “Yee-haw,” uses stunt horses to bring a jolt of exhilarating energy to the oft-photographed Eiffel Tower in Paris. In the museum’s screening room, visitors can watch I wish I am fish, an absurd film where Pivi chartered a plane for 84 goldfish so the creatures could experience the thrill of flight. 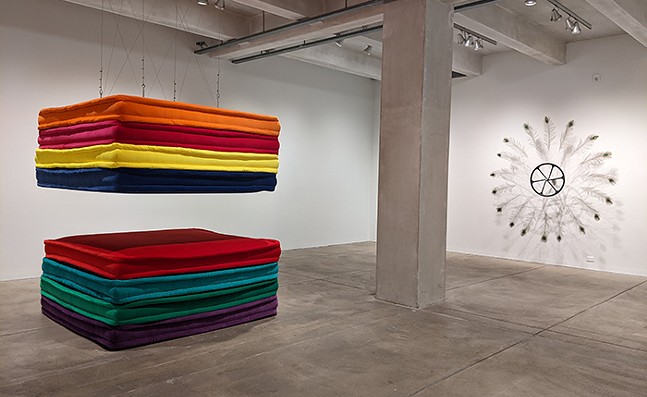 CP Photo: Amanda Waltz
Paola Pivi: I Want It All at The Warhol
Then there are the polar bear cub sculptures. So many cubs, all covered in soft, neon feathers, disarming you with their surprisingly expressive eyes and realistic teeth. They roll and play, some hanging acrobatically from trapeze rings, others snuggling up with each other (this is the one time Pivi’s works crossover, as one cub is seen chewing on a Jimmy Choo pump).

While I could wax on the profound meaning behind the fanciful ursine display, all I can think is, “This is cute as hell.” This is arguably what Pivi wants to accomplish with I Want It All, and what the audience needs after struggling through a pandemic and, for most of us, seeing the same four walls and same people for years. Pivi unabashedly indulges in extravagance, preciousness, and familiar comforts (in this case, being reminded of the “Shoes” video, which I easily watched dozens of times in my younger days, seems appropriate).

Whether intentionally or not, The Warhol has found the perfect show for the late COVID-19 era, one that encourages seeking moments of joy and delight because, as we’ve seen, they come at a premium when times get tough.
Paola Pivi: I Want It All. Continues through Aug. 15. The Andy Warhol Museum. 117 Sandusky St., North Side. Included with museum admission. warhol.org
© 2022 Pittsburgh City Paper