Alberta Arthurs Photo: Flash Rosenberg
Cristal Truscott, Alberta Arthurs, and Jeffrey Brown
In an essay for Are the Arts Essential? (NYU Press), Ford Foundation President Darren Walker writes about how the impact of art cannot be quantified because “one cannot measure the impact of empathy or love.”

Walker, who was instrumental in bolstering the fortunes of Detroit’s art community during that city’s economic crises in the mid-2000s, makes the case that the arts are not just essential, “they are an example for all of our work.”

Alberta Arthurs, co-editor of Are the Arts Essential? with Michael F. DiNiscia, agrees that the arts often transcend mere entertainment.

“We miss the fact that the arts are concerned, in a very intimate and also important way, with the larger issues of our time and the largest aspirations we have as a people,” says Arthurs. “We tend to put [the arts] aside or to use them to soothe ourselves rather than to the see the good sense and the policy positions and actions that the arts mean to inspire.”

Arthurs will appear Thu., May 12 in conversation with PBS NewsHour chief correspondent for arts, culture, and society Jeffrey Brown, and Cristal Truscott, Progress Theater playwright, director, and founder, as a guest of Pittsburgh Arts & Lectures' Made Local series. 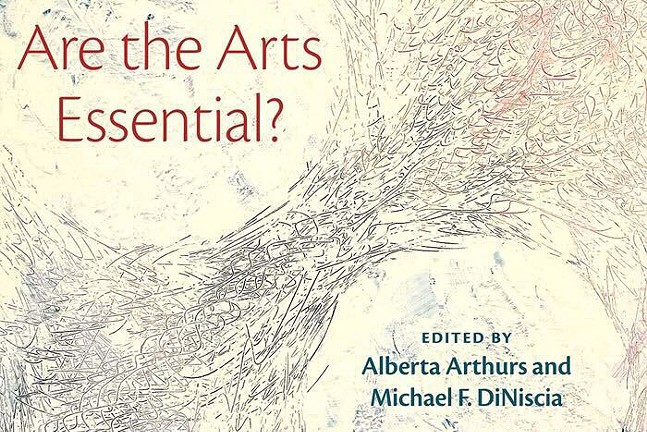 The 25 essays in Are the Arts Essential? were curated by Arthurs, a senior fellow of the John Brademas Center of New York University who was the president of then-Chatham College from 1977-1982. She solicited poets such as Edwin Hirsch, artists including Mary Miss, artistic director Oskar Eustis, composer Tania Leon, and choreographer and performer Elizabeth Streb for essays on what makes art essential.

“It was stunning to me that so few people turned me down,” Arthurs said. “I was hesitant about asking because all of them are busy people, but they responded immediately.”

The respondents’ collected work emerges as a template for why the arts matter. There are impassioned pleas of support for the arts, measured analyses, and evidence-based dissertations that attempt to prove art’s intrinsic value.

In Eustis’ essay, he writes about a theater group that toured rural Pennsylvania, Wisconsin, Ohio, Michigan, and Minnesota with a production of Lynn Nottage’s play, Sweat. In their essay “Leading Institutional Change: New Thinking about Mission, Values, and Purpose,” Jesse Rosen, the CEO of the American League of Orchestras, and Metropolitan Museum of Art CEO Daniel Weiss write about the Louisiana Philharmonic, displaced by Hurricane Katrina, being forced to play small, intimate venues.

In both cases, the opportunity to take art from familiar to new settings proved to be providential for artists and audiences.

Arthurs thinks that artists should not only make their work available but offer explanations about why they create art.

“They have an idea that the work will speak for itself, if they do it and hang it or mount it or put it in front of us in some other way, you’ll know why it’s there,” she says. “They very seldom do what they do in this book, which is talk about why they do what they do.”

Arthurs adds that when artists are asked to talk about it, they do a “pretty good job.”

“I think the only time you read about arts in our newspapers, it’s when the critics write about them,” she says. “You’re told whether to see something or not, whether last night’s performance was good or could have been better. It’s not about how these things reflect the lives we lead and have aspirations for us. It’s just about the quality of performance.”

There are many revelatory nuggets throughout the book. Most people don’t know or forgot that Bell Laboratories in New Jersey and XEROX Parc Laboratory in California once employed artists-in-residence to add creativity to their scientific teams. Or that the Philadelphia District Attorney’s office hired James Hough, who served 27 years for a murder he committed as a teenager, to serve as an artist-in-residence.

Other artists share personal reflections. Photographer Deborah Willis cataloged her time of isolation during the pandemic through photos, and mentioned the value of photographs of Emmett Till, and video images of George Floyd. Angela Cox writes about the art of Indigenous peoples in “It’s Who We Are,” and composer Tania Leon relates the story of her journey from Cuba to the United States.

“I think many of the essays resonate with that kind of reflection on art’s release into a larger world,” Arthurs says. “Art can be a vehicle for that. I think that shows up in many kinds of ways.”Are the Arts Essential?  6 p.m. Thu., May 12. Carnegie Library Lecture Hall. 4400 Forbes Ave., Oakland. Livestream also available. Free with registration. pittsburghlectures.org
© 2022 Pittsburgh City Paper