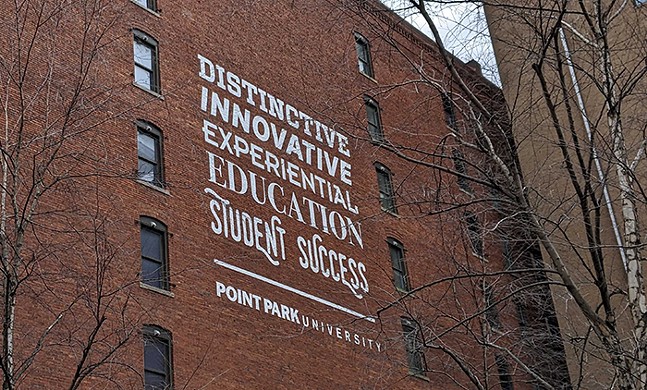 CP Photo: Amanda Waltz
Point Park University
A Lavender Graduation, or Lav Grad, is a ceremony that honors members of the LGBTQIA+ community who have earned degrees at various colleges and universities. This year, Point Park University will host its inaugural Lavender Graduation to recognize the achievements and successes of LQBTQIA+ students and allies of the community who are a part of the graduating class of 2021-2022.

Michael Elko, who serves as the Center for Student Success Coordinator at Point Park, says the event complements "the traditional commencement ceremony offered to all graduating students of Point Park," but with a few added features.

“Students will be presented with rainbow stoles at the event, which also will honor and showcase their accomplishments and plans for the future,” Elko says.

The ceremony will take place on Sat., April 23 in the Highmark Theater inside the Pittsburgh Playhouse.

Elko describes the event as “semi-private,” open only to the campus community. Those who attend are also asked to limit their photos and videos to only themselves and their guests.

Because some students may not be out to their families or the general public yet, they want the ceremony to be a private, safe space for students to feel comfortable to be themselves, according to Elko.

The significance of lavender, according to the Human Rights Campaign, combines the pink triangle gay men and the black triangle lesbian women were forced to wear in concentration camps as political prisoners in Nazi Germany. It goes on to say that the Lavender Graduation Ceremony was created by Dr. Ronni Sanlo, a Jewish lesbian who was "denied the opportunity to attend the graduations of her biological children because of her sexual orientation."

Point Park adds to a long list of higher education institutions across the nation that have adopted Lavender Graduation ceremonies, including the University of Pittsburgh and Carnegie Mellon University.

“Point Park has such a strong student-centered LGBTQIA+ community,” Elko says. “The University provides students with an environment that recognizes the significance and power of student diversity and offers students a safe space to be their authentic selves."

Elko adds that, as a gay man, he's "honored to be involved in planning and executing this event that recognizes the contributions and accomplishments of graduating LGBTQIA+ students and allies of the community."

"To be a part of this celebration feels really great,” says Elko.
© 2022 Pittsburgh City Paper