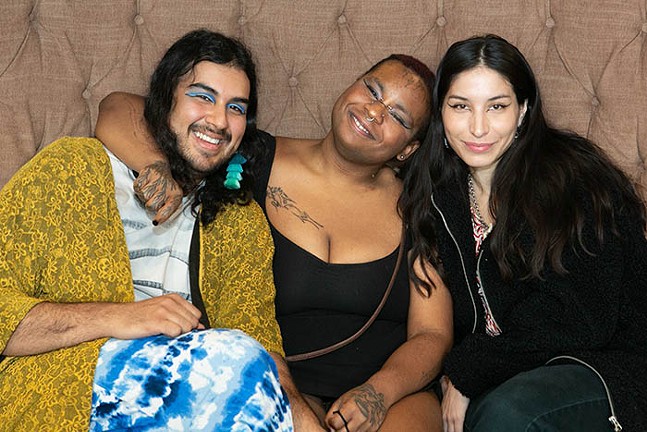 CP Photo: John Colombo
Dyspheric’s Samira Mendoza, Stephanie “XC-17” Alona, and Yessi
For many queer people in Pittsburgh, the dance floor is a site for fun, community, and a reprieve from the transphobia and homophobia they encounter in their everyday lives. The city has a few dance nights geared toward an LGBTQ crowd but, according to a new dance party collective, that doesn’t always constitute “community” for all, especially for Black and Brown trans people.

Dyspheric, an LGBTQ dance party group started in late 2020 by Pittsburghers Stephanie Alona, Samira Mendoza, and Yessi, has stepped in to bring something new to the scene.

The crew came together after being in each other’s general orbits for a while.

By day, Alona, who is an artist, served as youth programming organizer for Black and trans-led nonprofit SisTers PGH. Mendoza is the monthly programs coordinator at arts and technology nonprofit Assemble and also serves on the artist council at East Liberty’s Kelly Strayhorn Theater. Yessi is a multimedia artist and musician. All three plan Dyspheric’s parties and DJ during the events.

During the height of the pandemic, Alona was live streaming events with friends, when Mendoza booked them to do Hodge Podge, an interdisciplinary arts series featuring performances from local artists, including installations and “curated ensembles.”

Photo: Audrey
A Dyspheric party scene
Yessi credits Alona with coming up with Dyspheric’s name and kicking off their collective. “Samira and I really loved what they were doing and the vision that they had and just wanted to support them,” says Yessi. “Without even us trying, it became something.”

While Pittsburgh has a budding queer night life scene, Dyspheric aims to add something different. Even their vibrant, graphic event flyers show off the kind of vibe they are trying to give off. Whatever sound you like, whatever dance you want to do, the members of Dyspheric say there is room for everyone.

“When I started the livestream, it was to add more experimental diversity to the music scene,” says Alona. “Everyone's playing what they want to play, and sometimes asking, ‘Should I play this? Should I do this? Or should I do that?’ And then I also wanted to give people a voice who don't have a voice. Not saying they don't have a voice, it’s just that they are not getting the space to speak or to breathe, in a way. … I feel like people just want more.”

Dyspheric operates out of a handful of different spaces, primarily Spirit in Lawrenceville, and Collision PGH, a more private venue.

One thing you often hear when talking to members of the LGBTQ community in Pittsburgh is that the scene, the bars and clubs, are still primarily geared toward a white, gay audience. This can be alienating if you don’t fit into this category, putting Black and Brown LGBTQ people in a position where they are made to feel like “the other.”

The three members of Dyspheric, who are all queer people of color, say the group started out of a need to see Black and Brown trans and nonbinary people prioritized in a physical space where they could convene and party together.

“One main reason why we also like to jump around genres so much, at least for me, is because the dance floor I see as a space where we really can break down all these barriers,” says Mendoza. “It's one of the few spaces where you can see all these different types of people at once. Offering different genres and having the freedom to jump around that much also makes the sound cross-cultural and desegregated. Pittsburgh is also just clearly a very segregated place still. There aren’t many parties that don’t reflect that.”

Dyspheric plans to host other DJs and performers at upcoming parties, in addition to Yessi, Alona, and Mendoza, including Yadirtydaughter and Ali Berger on Sat., April 2 at Oakland’s P-Town Bar.

The group says Dyspheric’s focus on trans and nonbinary talent allows for a diversity of sounds that folks might not catch anywhere else.

Dyspheric is setting out to change that, with help from friends along the way.

“My favorite shows are those in which you can feel a lot of generosity and reciprocity in the help that we receive,” says Yessi. “If you're working at the door, you deserve fair pay like everyone else. People have been knowing that we don't have a ton of resources and have been super generous.”

And the parties continue for folks at home, too. In addition to their in-person parties, Dyspheric also has an online radio show at verge.fm that airs at 9 p.m. every third Sunday of the month.Dyspheric. instagram.com/dyspheric_
© 2022 Pittsburgh City Paper