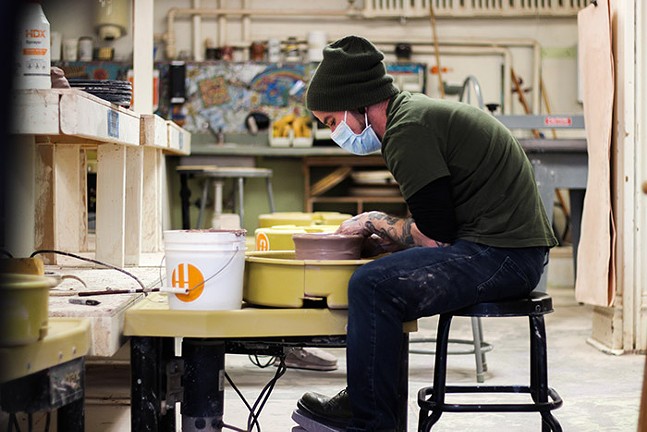 After relocating from Asheville, N.C. in September 2021, McCusker has settled into his role as the Union Project’s ceramics studio manager, cleaning and reorganizing the space and teaching classes.

McCusker also got to fire up the Bailey Gas kiln, a state-of-the-art piece of equipment McCusker says had been unused before he arrived.

“It’s been sitting for about a year and never been fired,” says McCusker. “It’s all digital. It’s crazy.”

Previously, McCusker served as the studio manager at Claymakers in Durham, N.C. Then, in 2018, he met Union Project deputy director Michelle Clesse during a conference for the National Council on Education for the Ceramic Arts, and the two kept in touch.

“I joked about how I was trying to get out of the South, and she was like, ‘Oh, you’re serious about that?’” he says. “A couple months later, she messaged me if I wanted the job.”

McCusker says moving to Pittsburgh has been a bit of a challenge, including preparing for the winter and getting used to navigating a city notorious for its aggressive drivers and strange layout. But McCusker says the Union Project offered a better position for him, both creatively and as a trans person.

“What attracted me to the Union Project was just the community-based programs that they do and the inclusiveness and diversity of the studio,” says McCusker. “There was not that in North Carolina.”

McCusker comes at a time when Union Project has sought to expand its resources and become more of an asset to the surrounding community. In November 2021, McCusker helped with the Clay Harvest, a celebration that served to debut Union Project’s Kiln Shelter. Started in 2019, the new facility is described as offering a safe, well-equipped place to teach ceramics, enabling the organization to “deepen its support of aspiring, emerging, and established ceramicists, and offer more arts education programming to surrounding neighborhoods.”

McCusker says that, while he mainly does animal sculptures “because they sell,” he also records his own gender transition through a series of sculptures.

Photo: Mac Star McCusker
“Gender Outlaw” sculpture by Mac Star McCusker
“Some of them are just funny about the whole transition and how different I look and some of them are more serious about the abuse I get and the mean comments,” says McCusker. “In the ceramics world, I got a lot of negative comments about it, saying the only reason I’m getting attention is because I’m trans.”

The works include a 2016 glazed earthenware sculpture called “Top Surgery: 60 Days Post-Op. A Transgender Self-Portrait” and “A Little Worse for the Wear,” a red earthenware piece described as reflecting “the amount of self repair and re-building of ego” transgender individuals have to do. Another one shows McCusker taking a selfie with a T-shirt that reads “Transition Pending.”

“Selfies are a huge thing with the trans community,” says McCusker.

His website defines his work more broadly, saying that it regularly involves social commentary and “spotlights the policing of gender, anti-discrimination laws, Bathroom Bills, and issues addressing the LGBTQ community.” Because of this, he’s been featured in numerous publications and lectured on his approach at various events.

Though he originally started out studying painting at Armstrong Atlantic State University in Savannah, Ga., he switched to ceramics after taking a sculpture class.

“I liked the physicality of taking up space with clay versus a painting on the wall,” says McCusker.

From there, he graduated from Georgia State University in 2009 with an MFA in Studio Art, Ceramics. He now works with different styles including stoneware and raku, described on the Union Project website as “an ancient pottery technique where pots are taken from the kiln while still glowing red hot, then placed in a combustible material, such as sawdust or newspaper.”

Currently, McCusker is teaching or has taught various ceramics workshops for all levels, including one on electric kiln maintenance and firing. Over time, he says he would like to do more outreach in his role.

“Ideally, I would like to do things with people in recovery and [Alcoholics Anonymous],” says McCusker, adding that he has been sober for 10 years. He cites his work for a program at Claymakers, which invited patients at a recovery facility to take lessons.

He adds that he would also like to become more involved with the local LGBTQ community.Union Project. 801 N. Negley Ave., Highland Park. unionproject.org
© 2022 Pittsburgh City Paper