CP Photo: Jared Wickerham
La’Tasha Mayes poses for a portrait in East Liberty.
The campaign to fill Mayor Ed Gainey’s state House seat in District 24 for the remainder of this year’s legislative term is well underway. La’Tasha Mayes, a nationally recognized leader in the field of reproductive justice and founder, president, and CEO of New Voices for Reproductive Justice, is the latest candidate to enter the race.

“I believe all things are possible in Pittsburgh,” Mayes tells Pittsburgh City Paper in an interview announcing her campaign.

The special election for the district, which includes Wilkinsburg and Eastern Pittsburgh neighborhoods, including Homewood, Highland Park, Garfield, and East Liberty, will be on April 5. There are no primaries for special elections. According to state law, the Allegheny County Democratic Committee is charged with selecting their party’s nominee.

There will then be a second election to determine who will represent District 24 starting in 2023 for the next two-year term. Regardless of the outcome of the special election, Mayes, who lives in Morningside, plans to pursue the Democratic nomination in the next election as well. She says she’s looked at the district map which is currently involved in a redistricting process, and she expects to remain eligible to run.

State Senate aide and vice president of the Allegheny Chapter of the Young Democrats Martell Covington and environmental justice advocate NaTisha Washington also announced their intent to pursue the Democratic nomination. According to TribLive, communications professional Ashley Comans, who previously was in the running for the seat, announced she was withdrawing from the race on Jan. 19 after this story was first published.

City Paper sat down with Mayes to talk about her work with New Voices for Reproductive Justice, a Pittsburgh-based, multi-state organization dedicated to the health and well-being of Black women, femmes, and girls, and her run for the state House, which will be her second time at the polls. Mayes first ran against Deb Gross for Pittsburgh City Council District 7 in 2015.

This interview has been edited and condensed for space and clarity.

Why are you pursuing elected office in District 24?

I've spent many years in the 24th Legislative District, mainly through my work with New Voices for Reproductive Justice. So much of my life, my work in the community, my professional work has been in this district. I always knew I wanted to live in this district, like after I graduated from Pitt, I always knew I wanted to live on that side of town. I'm deeply vested, not only in the present, but in the future of this community. I’m an experienced leader, not only locally, but at the state and federal level. I've been working in Pittsburgh, overall, for over 22 years and in this district for almost the same amount of time, going back to 1999.

I believe that where we are in our social life, our economic life, and our political life, we need leadership at this time that can weather the storm, [both] the political storm that's always going on in Harrisburg and the storm of these political times where we are boldly confronting race, gender, and class injustice and oppression. I have over 20 years of leadership skills that I know prepare me for the opportunity to become an elected policymaker. I'm an organizer at heart, a public servant at heart. 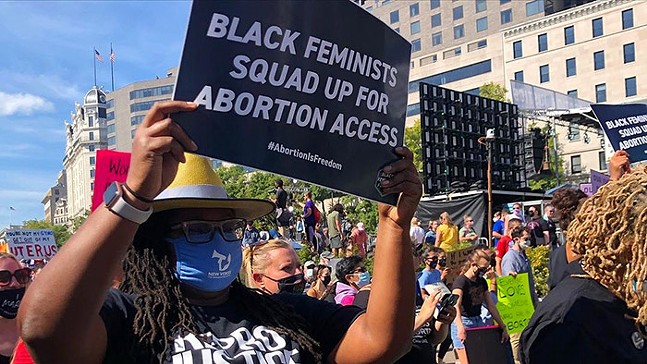 Why do you feel it’s important for our elected officials to have a strong grounding in reproductive justice?

Because, right now, we are literally facing the end of Roe v. Wade. I can't think of any other person running, announced or unannounced, that has greater expertise to take on, not only the legislative attacks, but also the cultural attacks that often come with opposition to abortion access. I'm the best person for the job, hands down. I consider my leadership in New Voices these last 18 years the highest calling of my life up until this point. The movement for reproductive justice has changed my life. It's shaped my life as well as prepared me to not only work in spaces that are around movement building, but organizing spaces, policy spaces, electoral spaces. The movement has prepared me for this time.

The movement for reproductive justice is so much more intersectional in its framing of those first and most impacted by so many different issues, from general access to health care, access to reproductive health care, abortion access, maternal health, particularly Black maternal health, environmental justice, gender-based violence, you name it, of course LGBTQ rights and liberation. That’s the moment we’re in, an intersectional moment. Intersectionality [as a concept] comes out of the lived experiences of Black women and women of color, in particular. In an intersectional moment where we're confronting so many systems that fail us as a society, this path has already been created for me to step into this position.

So many of the issues that I've led in New Voices have been state-level issues. I'm well positioned to go in on day one with decades of policy advocacy experience, working directly with legislators here and across the state on a regular basis, not just elected legislators, but non-elected policymakers that we've worked with over the years, too, especially around health care, voting rights, and voter suppression. Those are key state-level issues New Voices has worked on.

What are you most proud of from your many years of community work in Pittsburgh?

I was so proud when we [New Voices] were instrumental in the creation of the Allegheny County Human Relations Commission that expanded civil rights protections to LGBTQ residents in the county. That was in 2009. The city had had a commission two, three decades before that, and we were just catching up in the county. New Voices was unequivocal about our support for LGBTQ rights. I am a Black lesbian woman, and I had the honor of serving as the inaugural vice chair of that commission. So that was, like, a personal victory for me, but overall, expanding protections in the state that doesn't protect from discrimination of folks based on sexual identity or gender or sexual orientation or gender identity or expression in key things like employment, housing, education, and other public accommodations.

More recently, I'm proud of our COVID-19 relief work. We moved almost a half a million dollars to Black women, Black families, and families of all backgrounds, women of all backgrounds, providing menstrual products, diapers, cash grants, free laundry services, a toy drive, as well as making emergency contraception available. We gave out thousands of packets of emergency contraception for free.

I am also always proud of our social justice Rapid Response Fund, which made small grants available to individuals and organizations who are working to create change in their community. With foundations, it's hard to get money quickly, and so New Voices had a commitment of moving money to those on the ground in 14 days, which is unheard of. And it was a community-driven process. We funded all types of activities for Black and Brown communities over, I would say, almost a two-year period. That was a collaboration with the Pittsburgh Foundation.

Lastly, I'm most proud of our voter engagement work. We outreach to Black women voters all year round because we believe voting is the first step to participation, our democracy, and decision making in our communities. We have been working in this community to educate, engage, register, mobilize, and turnout Black women voters. When New Voices turns out voters, when we contact voters, over 80% of them turn out to vote, which is far above voter turnout across any group locally.Listen to an interview with La’Tasha Mayes and Natalie Bencivenga on Instagram Live at 6:30 p.m. on Wed., Jan. 19 at instagram.com/pghcitypaper
© 2022 Pittsburgh City Paper