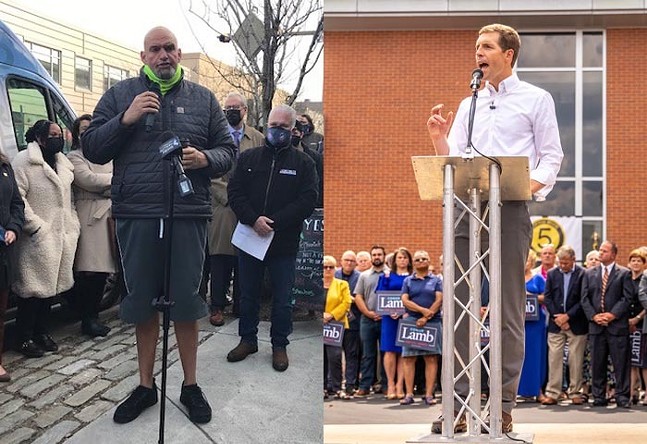 CP Photos: Ryan Deto and Kaycee Orwig
John Fetterman (left) and Conor Lamb (right)
U.S. Senator Jon Ossoff (D-Georgia) is set to introduce a bill in Congress that would ban members of Congress from holding or trading stocks. The move from the Georgia Democrat appears to be in contrast with comments from House Speaker Nancy Pelosi (D-California).

Fetterman is running for the state’s open Senate seat being vacated by U.S. Sen. Pat Toomey (R-Lehigh). He announced his support for a stock owning and trading ban on Jan. 11.

“Allowing members of Congress and their spouses to trade stocks is a clear conflict of interest,” said Fetterman in a press release. “Lawmakers should not be making profits off of the same companies they are supposed to be regulating, based on closed-door information that isn’t available to the public.”

Fetterman noted that “politicians across the political spectrum” have been accused of violating insider trading laws, specifically cases where members of Congress unloaded stocks before the pandemic shutdowns when only high ranking government officials were privy to COVID mitigation plans. He says that he supports members of Congress, their spouses, and their senior staffers from holding individual stocks, instead mandating that these assets be placed in blind trusts or sold off.

In a Jan. 11 tweet, Lamb pointed out that he was a co-sponsor on HR 1579, aka the Ban Conflicted Trading Act, which would ban members of Congress and senior aides from trading stocks. He co-sponsored that bill on Dec. 30, 2021. The next day, as reported by Huffington Post reporter Daniel Marans, Lamb elaborated and said he also supports a ban on spouses and dependents making trades.

The support from the two Pennsylvania Democrats comes in contrast to comments made by Speaker Pelosi last month. "We are a free-market economy. They should be able to participate in that," Pelosi told Insider at the time in response to a question about members of Congress trading stock.

In response, some Republican leaders have hinted they might ban the practice if the GOP retakes a majority after the November elections. Fox Business reported on Jan. 11 that House Minority Leader Kevin McCarthy (R-California) is considering limiting or prohibiting members of Congress from trading individual stocks while in elective office if Republicans win a majority of seats this fall.


Other Democrats who have already signaled support for a Congressional stock trading ban include U.S. Rep. Alexandria Ocasio-Cortez (D-N.Y.) and U.S. Sen. Elizabeth Warren (D-Massachusetts). U.S. Sen. Bernie Sanders (I-Vermont) has been a longtime advocate for the ban.