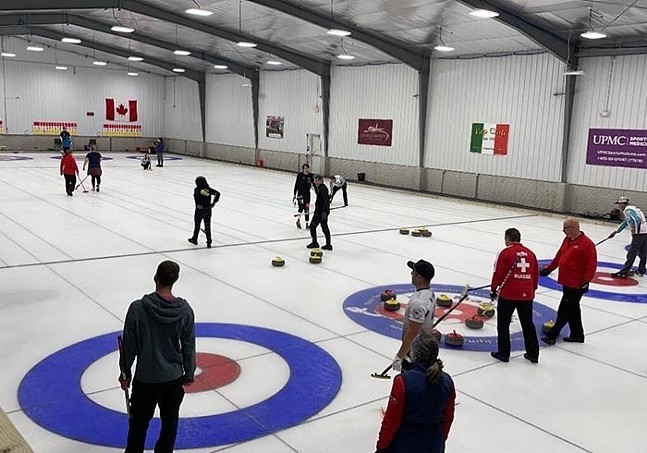 At some point during the Winter Olympics, you’ve probably seen curling on TV and asked yourself, “What is that?” Curling is an Olympic team sport, where two teams take turns sliding granite stones down a sheet of ice, using brooms to try and guide the movement of the stones. A traditional curling team is made up of four players, with each player delivering 2 stones in consecutive order.

Curling is played on a strip of specially prepared ice 150 feet long and 14-15 feet wide called a sheet. At each end of the sheet, there are two circles that look like targets known as houses. Each house consists of four rings which helps define which curling stones are closest to the center, commonly known as the button. After all stones have been delivered, the team that gets the most of their stones closest to the center of the house is awarded points.

Locally, curling is offered at Pittsburgh Curling Club. Founded in May of 2002 by several ex-pat Canadians, and local Pittsburgh residents, the club brings the sport of curling to western Pennsylvania. In 2007, the Pittsburgh Curling Club received its 501(c)(3) status as a charitable organization. The club originally began playing at the Robert Morris University Island Sports Complex and operated there until 2019.

The curling club offers league curling as well as pick-up curling 5 days a week. Most games are held during the evening hours, with some afternoon games available on Saturdays and Sundays.

Anyone interested in learning how to curl, can attend one of the many Learn to Curl classes held at the Pittsburgh Curling Club. Classes are run by experienced members of the club who provide you with a great introduction to the sport in a typical 2-hour class. Dates for upcoming classes can be found at pittsburghcurlingclub.com. There are already several dates on the schedule for 2022, with more dates being added all the time.

After your Learn to Curl class, if you enjoyed it and want to join the Pittsburgh Curling Club, several membership packages are offered that can be used immediately for any leagues, or pick up curling nights throughout the week. If you want to take things a little slower, there’s a “Beginner Membership” package that will give you two more sessions of instruction, with an additional two sessions that you can use for any pick-up curling game at the Pittsburgh Curling Club.

With the Winter Olympics only a few months away, the Pittsburgh Curling Club will be scheduling multiple open houses and Learn to Curl events during the games. Members may organize watch parties to watch curling coverage at the curling club. In addition, this spring we have several tournaments scheduled at the curling club, which will bring in curling teams from across the country to compete on our ice. Information about all of these events can be found at pittsburghcurlingclub.com, as well as Facebook, Twitter, and Instagram. Curling matches happening at the club can be found on Pittsburgh Curling Club’s YouTube channel.

See for yourself what makes curling so fun, and why this unique sport keeps growing!
© 2022 Pittsburgh City Paper