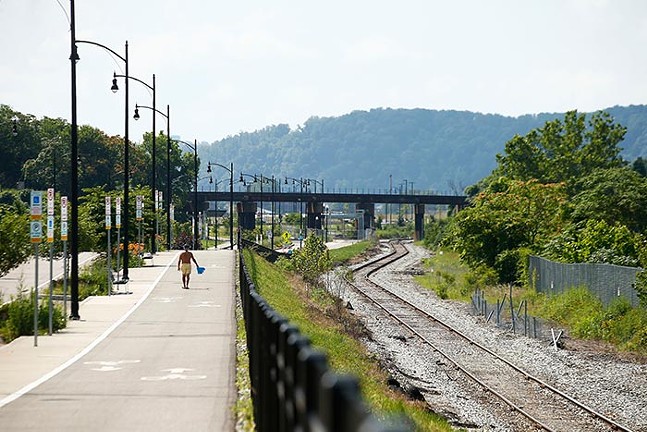 CP Photo: Jared Wickerham
Hazelwood Green in 2019
When development plans for Hazelwood Green, originally called Almono, were proposed, the vision for the large project at the former industrial site in Hazelwood was clear: a “Complete Streets” office park and multi-use housing development designed for high-quality use by pedestrians, cyclists, public transit users, and drivers. After the infrastructure for the development was complete, the 178-acre Hazelwood Green had a lot of that, including high-quality bike infrastructure, streets designed for slow driving, safe pedestrian crossings, and wide sidewalks, and a rerouted bus route to serve the area. There were even somewhat controversial plans for automated shuttles to carry passengers between the development and Oakland.

Hazelwood Green was heralded as the region’s first Complete Streets neighborhood, and it was praised as a “world-class sustainable development.” And in some ways, it still is those things. But recent moves by Pittsburgh’s incoming mayor and changes to Hazelwood Green’s zoning have brought some uncertainty to that vision of an environmentally friendly, vibrant, and sustainable neighborhood.

As first reported by Technical.ly Pittsburgh, Pittsburgh Mayor-elect Ed Gainey announced on Nov. 24 that when he takes office in January, he will place the city’s Mon-Oakland Connector project on hold.

The project proposes improved infrastructure from Hazelwood through Junction Hollow and up to Oakland, with the eventual addition of potentially autonomous shuttle vehicles to carry passengers between the two neighborhoods. The connector has generated opposition over the years from residents in Greenfield’s Four-Mile Run neighborhood and public-transit advocates, but proponents have said it’s necessary to service the growing job sector in Hazelwood Green and connect it to the talent at Carnegie Mellon University.

With the Mon-Oakland Connect project on shaky ground, that would likely deprive Hazelwood Green of an additional alternative-transit connection. The new neighborhood is currently served by Port Authority of Allegheny County bus route 57, as well as the 93 and the 56, which stop at the entrance to Hazelwood Green, giving passengers a short walk into the development. There is also a bike trail running through Hazelwood Green that connects to the Eliza Furnace Trail multi-use path, aka the Jail Trail, that runs all the way to Downtown. But part of the overall vision and success of Hazelwood Green is to provide several high-quality transit options that aren’t personal vehicles to the neighborhood.

The possible loss of the Mon-Oakland Connector isn’t the only setback for alternative transit at Hazelwood Green. On Nov. 23, Pittsburgh’s City Planning Commission approved a request by the Hazelwood Green developers that could create as many as 5,500 additional surface parking spaces in the neighborhood. This would nearly triple the amount of parking, though the additional spaces are said to be temporary. These plans also include lowering building height limits, which could open up the possibility of making Hazelwood Green less dense, making it harder to sustain walkability.

Laura Wiens is the director at Pittsburghers for Public Transit, an advocacy organization that has been critical of the Mon-Oakland Connector. She said it's common consensus that adding more parking spaces brings in more cars, and that is antithetical to Hazelwood Green’s vision. “It seems concerning that at a site that was looking to be a beacon of climate change policy, help to improve air quality, be a responsibly developed neighborhood, and improve alternative transit use, would think to develop it as if it is a similar to suburban community,” said Wiens. “I think that everyone would be critical about that.”

In an October meeting, some Hazelwood residents echoed this sentiment. Resident Eric Day said increasing parking and lowering density is “against the fundamental beginning of this entire development,” according to WESA. “This development cannot support individual trips in automobiles.”

Wiens said it would be better to expand public transit service into Hazelwood Green, and her group has been advocating for extending Port Authority’s 75 bus into the neighborhood.

“Residents have been demanding a real look of what this development means,” said Wiens. “It would be more effective and efficient and sustainable to use our existing transportation resources rather than build something that would become obsolete.”

When the Mon-Oakland Connector, to which Wiens was referencing, was being championed by the administration of Pittsburgh Mayor Bill Peduto, the city was only projecting that 1,244 people would use it on its opening day. That is just a fraction compared to the potential drivers that would use 5,500 additional parking spaces. This is one reason why Wiens thinks expanding public transit is the best option to help fulfill Hazelwood Green’s vision.

Todd Stern, a managing director for U3 Advisors, which is advising on Hazelwood Green’s development, said at the October meeting that the developers have no interest in undermining the good work and vision of Hazelwood Green. However, he added he doesn’t believe there is enough demand to bring more mass transit to the site just yet.

According to PublicSource, at the November planning commission meeting, the developers said the additional parking is necessary to attract residents and businesses to Hazelwood Green, and had no incentive to create more parking than absolutely needed.

Stern said in October that the decision to add in temporary parking spaces and lower building heights is just an interim decision, and the eventual goal for Hazelwood Green is to boost public transit and alternative transit.

“We’re talking about interim solutions that are necessary to help us kickstart development activity,” said Stern, according to WESA. “But ultimately, we’re going to have to find mass transit solutions to really enable growth in this region.”
© 2023 Pittsburgh City Paper