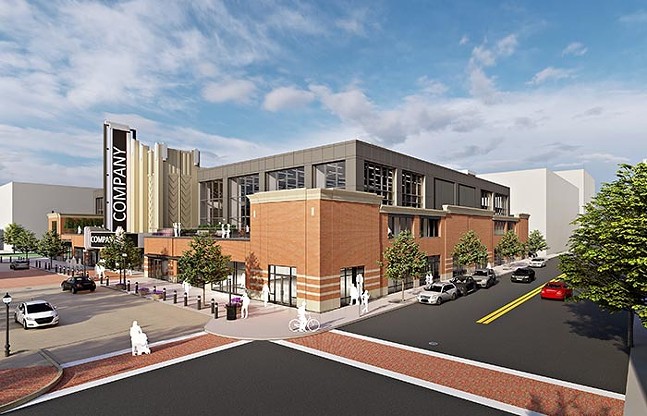 Image: Courtesy of HOK
Rendering of the new "Box Office" development at SouthSide Works
SouthSide Works is currently undergoing some changes after developers decided on a major re-haul that shifted from the retail/restaurant focus of the past and into a development centered on office space and housing in Pittsburgh’s South Side neighborhood.

That new look just got its first completed overhaul as the former SouthSide Works movie theater has been converted into a new “Class-A” office space.

The new 77,000-square-foot space has been dubbed “Box Office,” in honor of being housed in the former cinema. The project was completed by SomeraRoad, Inc., a Nashville and New York-based commercial real estate investment and development firm, and was designed in partnership with HOK architectural firm.

“Box Office” includes modern interiors with large windows to inject natural light to the formerly windowless movie theater. The new office space also now includes 1,700 square feet of private patio outdoor space. The large staircase has been given a modern and sleek facelift. According to a press release, the office space is “geared toward forward-thinking tech and creative tenants” looking to move to Pittsburgh or expand here.

“We were thrilled to have the opportunity to reimagine a segmented, dark theater into a flexible, light-filled workplace for the tech industry and creative class,” said Eric Linebarger, Senior Project Designer at HOK. “The design honors the building’s former use but incorporates elevated amenities, ample outdoor space, and industrial-inspired design components that infuse the workplace with energy.”

SomeraRoad highlights the location of the new office space as being within walking distance to grocery stores, coffee shops, bars and restaurants, outdoor amenities, and bustling Carson Street, as well as walking and biking trails.

According to a release, Fred Rogers Productions and Rite Aid will take occupancy in the spring of 2022. Additionally, a Pins Mechanical Co. location is set to open in the summer of 2022 with duckpin bowling, pinball, classic arcade games, bocce ball, patio pong, and more.

Pittsburgh’s economy has transitioned over the decades from being reliant on heavy industry to now seeing growth in tech and professional services. Retailer Services Group CBRE is working with SomeraRoad on the SouthSide Works redevelopment and CBRE vice president Herky Pollock hopes Box Office will fit into the transition of a new Pittsburgh workforce.

“The Box Office is a microcosm of Pittsburgh. It is a repurposed movie theater, resting on a former steel mill site, and ideally suited for a prominent transformative white-collar use," said Pollock in a release. "This transformation mirrors that of our regions from an economy based predominantly on blue-collar industry to one that is the epicenter of white-collar resurgence."
© 2022 Pittsburgh City Paper