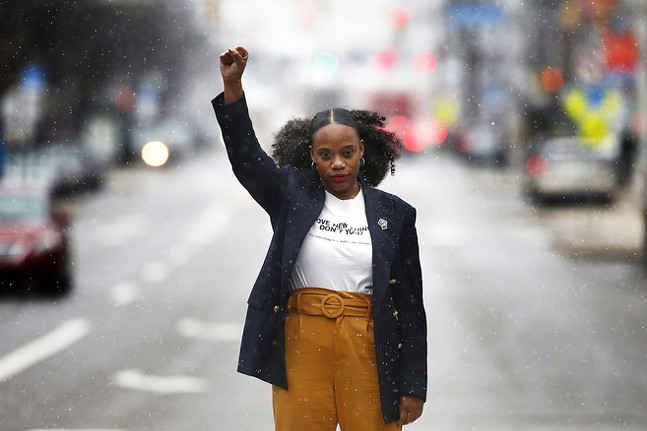 CP Photo: Jared Wickerham
Summer Lee poses for a portrait on Penn Avenue in East Liberty in 2019.
The race to replace retiring U.S. Rep. Mike Doyle (D-Forest Hills) has already attracted at least three Democratic candidates, and many of them have hit the ground running, announcing endorsements from local elected officials, advocacy groups, and labor unions. Candidates Jerry Dickinson and state Rep. Summer Lee (D-Swissvale) have both been angling for the progressive faction of Pittsburgh’s Democratic electorate.

Now, Lee has added to her list with an endorsement from the Working Families Party, a minor political party that advocates for policies like increasing the minimum wage, progressive taxation, universal paid sick days, addressing student debt, and energy and environmental reform. The WFP sometimes runs candidates as part of its own party, and sometimes backs candidates within Democratic primaries.

On Sat., Nov. 13, at Lee's official campaign kick-off event in Pittsburgh’s Westinghouse Park, the Working Families Party announced its endorsement of Lee, who also picked up the endorsement of Kendra Brooks, a Philadelphia councilmember who won election in 2019 under the WFP ballot.

Nicolas O'Rourke, Organizing Director of Working Families Party of Pennsylvania, said the party is proud to endorse Lee and excited to see her join WFP’s team of progressive lawmakers.

“For too long, the working class in Pennsylvania has been without the kind of representation in Congress that prioritizes a commitment to building grassroots political power for the underrepresented, the multi-racial working class and working poor,” said O’Rourke in a release. “Electing Summer Lee, a brilliant Black Woman and People's Champion to Congress will be another crack in that glass ceiling.”

Image: Courtesy Working Families Party
Lee announced her congressional run on Oct. 19. The incumbent, Mike Doyle, has served for more than 25 years and announced his retirement the day before Lee's announcement. Earlier in the year, Pitt law professor Jerry Dickinson announced his run for the seat, and in November, attorney Steve Irwin entered the race. Pennsylvania’s congressional districts have yet to be finalized, so it is unclear what shape the district will have, but many assume it will be anchored by the city of Pittsburgh and include some suburbs. If so, this would make it a safe Democratic district.

At the event, another progressive political organization, Democracy for America, also endorsed Lee's run for Congress. Lee said she is honored to receive the endorsements of the organizations.

“WFP and DFA have consistently been organizing powerhouses, effective fighters for workers’ rights, immigration justice, police accountability, and more,” said Lee in a statement. “Cycle after cycle, they’ve played a crucial role in electing bold, progressive Democratic leaders and I look forward to working alongside their members to win not only this Congressional seat but real victories for working people.”

The Working Families Party was started in the late 1990s and has notched some impressive victories as of late. Brooks’ win in Philadelphia was the first time a third-party candidate had won a citywide race in modern history. And one of WFP’s endorsed statewide judicial candidates for the 2021 election, Lori Dumas, appears to be the only statewide Democrat poised to win, pending a recount. Dumas' win would flip a Republican-controlled seat on Pennsylvania’s Commonwealth Court. Locally, WFP also endorsed Lisa Middleman, who won a seat on Allegheny County Common Pleas court this year.

Democracy for America CFO Christopher Scott said Lee has already proven to be “a tenacious fighter for working families,” which was behind the reason the group endorsed her.

“We stand at a critical crossroads in determining the direction our country will move," said Scott. "We need experienced and battle-tested leaders, like Summer, who have the lived experience and are battle tested to advocate and help enact bold progressive policies that will not only benefit the citizens of PA-18 congressional district, but propel families across America forward.”
© 2022 Pittsburgh City Paper