Screenshot taken from Facebook
Oakmont GOP Committee chair Veronica Steinkirchner with Matt Wakulik in a photo posted to Facebook on Oct. 30
The Iron City Citizens Response Unit is an extremist militia group based in the Pittsburgh area that has generated a lot of controversy over the years, including associations with symbols linked to white nationalism, and having several Republican political candidates dissociate with the militia group after initially praising them. 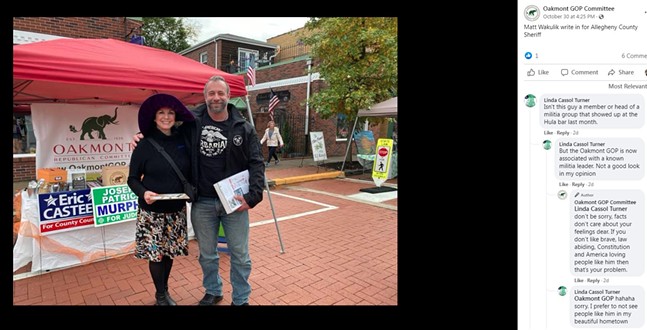 And on Nov. 1, the Pittsburgh 3rd City Council District Republican Committee posted on the committee’s Facebook page calling for voters to write-in Wakulik for sheriff.

“I’ve not met or spoken to this gentleman, or know anything about him,” says DeMarco, in reference to Wakulilk. “We are focused on electing the candidates we do have on the ballot today and that is where my efforts and that of the County Committee are focused.”

After this story was published, City Paper was contacted by Bob Hillen, chair of the Republican Committee of Pittsburgh. Hillen said that the Facebook page for he 3rd City Council District Republican Committee was created by former committee chair Andy Maul, who still runs the page, even though he is no longer the chair of the committee. However, Hillen said that Maul is the only person who can take down the page, as he is its administrator.

Wakulik once called City Paper “communist” and the “enemy of America” when CP asked him about IC CRU members sporting Valknots, a symbol with associations to white nationalism. On his social media, Wakulik often derides “communists'' and calls those with different ideologies “tyrants” and “evil” and seemingly supports violent vigilantism.

On Aug. 10, Wakulik posted praise on Facebook for the racist manifesto “Might is Right or The Survival of the Fittest,” an 1890 book that, according to NBC News, is “filled with misogynistic and anti-Semitic rhetoric, is a staple among neo-Nazis and white supremacists on extremist sites.”

The boat parade was eventually canceled and the rally was moved to Verona, where many residents criticized the restaurant that hosted Wakulik and a string of far-right candidates, such as Rick Saccone.

On the Oakmont GOP Committee post, some commenters questioned the committee’s association with Wakulik.

In response, the Oakmont GOP Committee Facebook account wrote, “don’t be sorry, facts don’t care about your feelings dear. If you don’t like brave, law abiding, Constitution and America loving people like him then that’s your problem.”
Editor's note: This story was updated on Nov. 5 to include a statement from Bob Hillen, chair of the Republican Committee of Pittsburgh.
© 2023 Pittsburgh City Paper