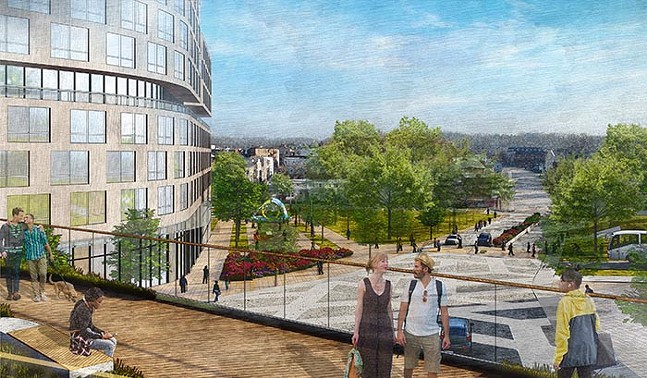 Image: Courtesy of Walnut Capital
Architectural drawing of Oakland Crossings
At the border of South and Central Oakland lies a largely unused area right in the middle of the city. Boulevard of the Allies, a fast moving and wide roadway, cuts through the neighborhood, dissecting a section of Pittsburgh that feels out of place for an urban corridor. Oakland is a major commercial center, complete with two large universities, thousands of workers, the city’s largest public library, and scores of restaurants and bars, but traveling on this section of Boulevard of the Allies and some of its surrounding roads feels more like traversing a suburban strip mall that has fallen on hard times.

Just about everyone — city leaders, community groups, and local developers — wants to give this section of Oakland a makeover. Oakland Planning and Development Corporation, a registered community organization, is in the midst of assisting on a community plan that could encourage increased density and development of this part of town. Pittsburgh Mayor Bill Peduto, in tandem with Pittsburgh-based developer Walnut Capital, has already submitted a zoning change to city council that allows for more housing and new amenities like a grocery store to be built in the neighborhood.

However, despite similar goals, these two factions are not in total agreement. In fact, over the last few weeks, they’ve become adversaries.

OPDC is pushing back on the mayor’s request for a zoning change, saying the mayor and the developer shouldn’t be leading the process and that it should go through community groups first. Walnut Capital says it has always been working with community groups and that this site is necessary to unlock Oakland's potential as a live-and-work neighborhood. And the Peduto administration agrees, adding that the proposed developer could even qualify for time-sensitive COVID relief funds to improve the neighborhood’s streetscape.

The argument between the two comes down to a focus on upending a community process versus the desire to improve a neighborhood more quickly than usual, and transform the area into a vision that is largely, if not perfectly, supported. In the middle are also forces of general neighborhood opposition to increased density and questions about the ability of adding affordable housing to the project. Overall, it's another example of the difficulties that surround ambitious urban development. 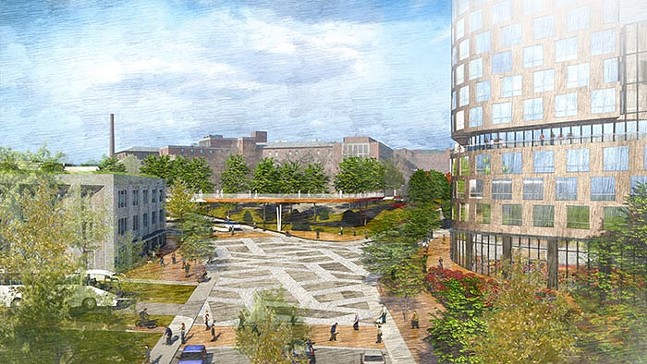 The vision for new development around Boulevard of the Allies in Oakland centers mostly around UPMC Magee-Womens Hospital. Walnut Capital calls the plan Oakland Crossings, and Walnut Capital president Todd Reidbord says he wants the plan to create a new doorway to Oakland, one that shows off Pittsburgh to the many visitors whose first introduction to the city is through the East End neighborhood because they are visiting its universities and major hospitals.

The Oakland Crossings plan includes 17 acres that envision adding 1,000 new market-rate units in buildings about 150 feet high near UPMC Magee, creating a pedestrian plaza on a section of Zulema Street and adding more greenspace amenities to Zulema Park, constructing a pedestrian bridge to connect the Oak Cliff neighborhood to Oakland Crossings, streetscape improvements to slow traffic down on Boulevard of the Allies, and adding a new grocery store at the recently closed Quality Inn/Panera Bread site. To accommodate all these proposals, Peduto introduced a zoning change to this section of Oakland, including increased building heights.

Reidbord says the plan is to attract more young professionals to this part of Central and South Oakland, so they can live, work, and play in the neighborhood, and to help grow Central Oakland’s population, which shrunk marginally between 2010 and 2020.

“In the end, our plans bring more people to Oakland and could help grow the city,” says Reidbord. “I don’t know why that is controversial.”

He adds that by increasing the supply of market-rate units in this part of Oakland, it could keep housing prices from rising for older units in the area, which are mostly used as student housing, or are the homes of longtime residents.

Reidbord understands there might be some opposition to converting some homes on Halket Street right across from UPMC Magee into taller, multi-unit buildings. But he doesn’t believe this would ruin the fabric of the neighborhood since most of those homes are already fairly dense living situations with yards filled with parking lots.

Oakland is the third largest job center in Pennsylvania, just behind Center City in Philadelphia and Downtown Pittsburgh. Reidbord says there should be more dense housing in Oakland to allow for new residents to live and work in the same neighborhood.

“It kind of feels that Central and South Oakland are not really part of the neighborhood,” says Reidbord. “If we can do this, then we will claim this as part of Oakland.”

Reidbord says more residents in this part of Oakland, particularly young professionals, as opposed to university students, are necessary for something everyone in the community wants: a grocery store. An IGA grocery store on Forbes Avenue closed in April 2017, exacerbating Oakland's food desert issues.

“The question is, ‘What do you need in Oakland?’” says Reidbord. “To me, the goal is to get those people who work in Oakland to live in Oakland, and then more amenities will follow.” 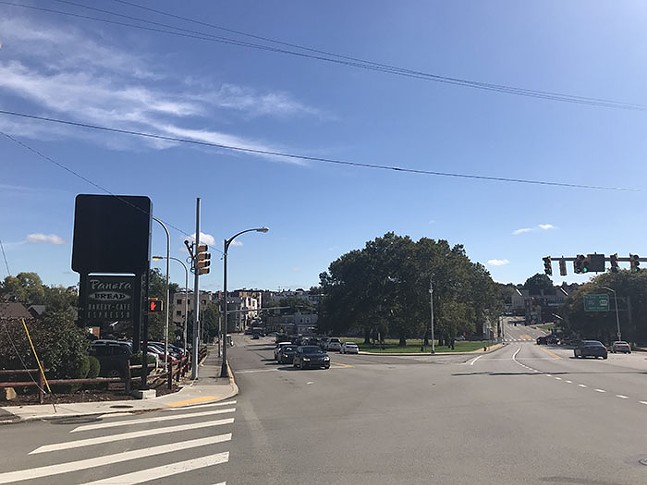 CP Photo: Ryan Deto
Intersection of Boulevard of the Allies and Coltart Avenue in Oakland

On Oct. 5, at a public hearing sponsored by Oakland Planning and Development Corporation, several speakers voiced opposition to the mayor’s zoning change proposal and Walnut Capital’s plans. Some were generally opposed to any new housing to the area or anything that would alter traffic patterns, and some were supportive of the plans, but most who spoke weren’t necessarily opposed to increased density or a grocery store, and were instead against the process of the zoning change proposal.

Wanda Wilson of OPDC spoke with Pittsburgh City Paper after the meeting and shared similar sentiments. She says she doesn’t believe a developer should be on the ground floor of a zoning change, and that any rezoning process should originate among community groups and then go through the professionals who work in the city's planning department.

“There is a reason why private developers don’t write the zoning process,” says Wilson, citing anxieties about conflicts of interests between developers and elected officials.

Wilson says any future development plans for Oakland should defer to the Oakland Plan, which is still in process. According to its website, the Oakland Plan “will create a 10-year plan with a shared vision for Oakland's future and the projects and programs necessary to make that vision a reality.” Wilson acknowledges the Oakland Plan has some suggestions for increased density in the neighborhood, but bristles at the idea of already assigning those visions to one developer, especially before the plan is finalized.

Once it's finalized and approved by the city’s Planning Commission, which could take several more months, if not longer, Wilson says she would be supportive of the city reaching out to developers who can fulfill the plan’s specifics.

“We are in the process of determining land use for the neighborhood,” says Wilson. “It’s not definitive, but we are still developing it. There are some visions for more density of development, but it doesn’t have to have to come from just one private development.”

In September 2020, before he was defeated in the Democratic Primary, Peduto seemingly endorsed this community-first process when announcing the creation of the city’s first comprehensive land-use plan, ForgingPGH.

“This will come down to neighborhoods and the organizations and the neighbors, and what they want to see,” said Peduto at a press conference in September 2020. 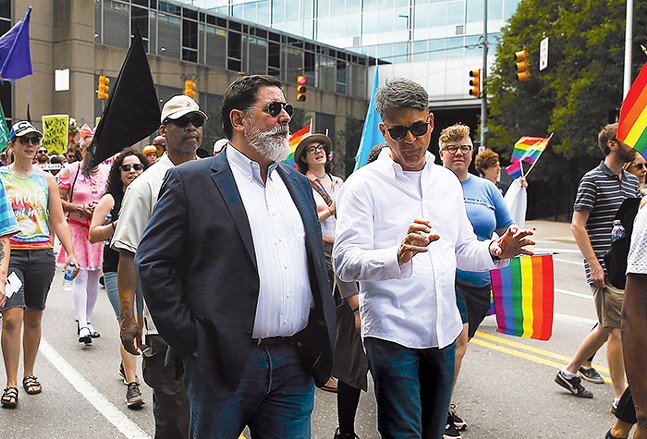 Pittsburgh City Councilor Deb Gross (D-Highland Park) brought up the city’s zoning process at the Oct. 5 public hearing. She said, typically, a zoning administrator will start the zoning change process, and then that change will go through the Planning Commission. Then, city council will review them before approval or rejection.

If a developer wants to complete a process outside of the zoning rules, the owner will then typically apply for a zoning variance.

However, this isn’t the only way the city can, and has, made zoning changes.

Dan Gilman, Peduto’s Chief of Staff, says councilors have led the zoning change process many times in the past. He says, in September, council introduced a zoning change to Hazelwood and that, when he was on council, he worked with Walnut Capital to start a Specially Planned zoning district for the company’s Bakery Square development.

“There are so many zoning changes that have started in city council in my 18 years,” says Gilman.

He agrees with Gross that, typically, property owners ask for variances, but says those can be difficult to get for large development proposals. A zoning variance for a large mixed-use housing and grocery store development near the East Liberty Busway station was denied earlier this year, even though the project had support from transit advocates, the mayor, and council.

Gilman adds that variances can also fairly easily be blocked in courts. This year, City Paper wrote about how a proposed food hall in Lawrenceville had its zoning variance blocked by one neighbor in Lawrenceville because the plan was four off-street parking spaces short of code.

Reidbord also adds that Walnut Capital is currently undertaking several community meetings about their proposal, and has attracted support of some community groups and labor organizations. He says, even in the fastest case scenario, construction on Oakland Crossings wouldn’t start until spring 2023. Reidbord says waiting for the Oakland Plan to finalize could push that date back two years, and that the market conditions are ideal right now for the plan, and is unsure what they will be like in two years.

Gilman says the city has been working on the Oakland Plan for over a year, and that the fundamental values of that plan so far align with what Oakland Crossings brings to the neighborhood.

But one area Wilson and OPDC are stern on is wanting a zoning change to require future developments in Oakland have affordable housing. She says she wants to see a zoning change include an inclusionary zoning overlay district for Oakland, meaning future large developments would have to create a percentage of affordable housing in their plans, like what is currently required in Lawrenceville, and has been proposed in Bloomfield and Polish Hill.

When asked about affordable housing in Oakland Crossings, Reidbord says trying to include a percentage of affordable units at that scale would be too difficult.

Peduto hasn’t proposed a citywide inclusionary zoning policy, but the likely new mayor, state Rep. Ed Gainey, campaigned on the policy. It's unclear how much council supports that policy, but a 2017 report from the city’s Inclusionary Zoning Exploratory Committee found that a 10% affordability IZ requirement, with incentives, was feasible in all neighborhoods in Pittsburgh.

Pittsburgh City Councilor Bruce Kraus (D-South Side) represents the district where Oakland Crossings is being proposed. At the public hearing, he said opposition to the development was mostly about the process, not the project. He addressed a time limit for federal COVID funds that could be used to help improve streetscapes and other public parts of Oakland Crossings as to why the plan might need to be expedited. But he was also hopeful that the opposing factions could work together to find a path forward.

“I hope we don’t throw the baby out with the bathwater,” said Kraus on Oct. 5 after announcing that council will take a bit more time to review the proposal before voting. “But we have time to do that, to work through what it is, and find the best solution that interests the community.”
© 2021 Pittsburgh City Paper