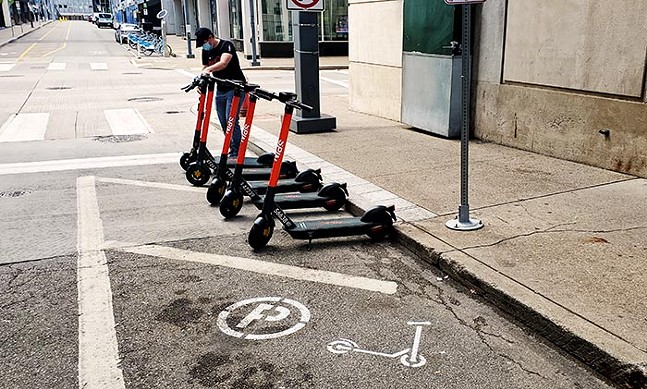 CP Photo: Lucy Chen
A scooter being parked in a designated parking corral in Downtown Pittsburgh
Pittsburgh is a few years late to the rentable e-scooter fad that’s swept cities like San Francisco, St. Louis, New York, Cleveland, and Washington, D.C. But while e-scooters appeared without warning on many other cities’ streets, e-scooter charging stations were the first sign that a change was coming to Pittsburgh’s transit scene.

And just like other cities with rentable e-scooters, there have been some legitimate issues and complaints about illegal parking and concerns about user safety in Pittsburgh. However, Spin, the San Francisco-based company the city of Pittsburgh signed a two-year pilot program with, says it is using different and stricter tactics for its Pittsburgh scooters than scooter companies in other cities, particularly with parking. It believes the company’s continued partnership with Pittsburgh's Department of Mobility and Infrastructure can address parking concerns and hopefully bring the city closer to its goals of lowering dependency on personal vehicles.

“The whole goal of the program is to reduce clutter and give the scooters a home,” says Spin’s general manager of Pennsylvania Dan Shoman. “Right now, we're in the process of educating users and making sure they know where to park these things and keep everybody safe.”

Spin has 16 charging stations located throughout the city, which give people a $1 credit towards their next ride for using them, as well as approximately 100 painted hubs on roadsides that have reflective protectors. While the charging stations have a fixed number of six spaces available, Shoman estimates that about 10 e-scooters can fit into a painted hub. Both types of parking hubs are marked on the in-app map, and as people continue to use the e-scooters, Spin plans to move and increase the number of its parking hub placements.

To encourage legal and safe parking habits, Spin makes users read educational screens when people first sign up for the app, and parking rules are included in the safety quiz people must pass to rent e-scooters. Spin also requires that people take a picture of where they parked their scooter after the ride, so the company can evaluate if the parking job was acceptable. All scooters also have ID numbers, allowing Spin to trace illegally parked scooters back to their last users.

“These aren't the razor scooters you had when you were a kid."

In most places around the city, car parking spaces are also fair game for e-scooters. But Downtown, roughly between I-579 and the Point, Spin currently only allows people to park in designated parking hubs. The same geofencing used to enforce these parking rules also keeps e-scooters within city limits and off private property. When people go beyond the geofence, the e-scooters will no longer accelerate, and friction will slow them to a stop in a few meters.

“These aren't the razor scooters you had when you were a kid. You're not just gonna kick-ride them because they're, you know, they're a 60-pound vehicle,” Shoman says.

For those who don’t follow parking rules — whether that means parking in bike lanes, on sidewalks, or even on highway medians — Spin issues warnings and escalating fines of $10 on the second strike and $25 on the third strike. After a person’s fourth warning, their account will be suspended indefinitely.

“We rarely see it get past the first or second warning as that educational piece kind of kicks in,” Shoman says. “In addition to that, we also have staff out on the street 24 hours a day relocating misparked scooters.”

Those staff members represent a departure from other cities’ rentable e-scooter programs. While much of the micro-mobility world relies on gig work for relocating and charging e-scooters, Spin only hires full-time employees with benefits. Charging works slightly differently for Spin scooters as well. Instead of taking the whole scooter to a charging location — often a gig worker’s house or apartment — Spin staff swaps out the batteries themselves.

The rentable e-scooter boom began nationally in 2017, but Pittsburgh residents had to wait until July 2021 for a provision added to the Pennsylvania budget bill. The provision grants a pilot program for scooter sharing in a second-class city, meaning a city with a population between 250,000 and 1 million people. Before that pilot, e-scooters were illegal in Pennsylvania, and even now, they are still illegal outside of Pittsburgh city limits.

Pittsburgh has partnered with exclusively Spin for its pilot, another thing setting it apart from other U.S. cities, where multiple companies — like Lime, Bird, and others — often compete for consumers’ scooting trips. Spin launched July 9 as part of Move PGH, whose goals are to provide people with non-car options such as public transit, mopeds, and bike share, and Spin’s work with the city allowed Spin to get a headstart on preparing for e-scooter challenges, says Shoman.

“We've been working with DOMI for over a year on setting up the infrastructure for this program,” Shoman says. “So it's a first of its kind where, when we launched we had parking infrastructure in place already.”
© 2021 Pittsburgh City Paper