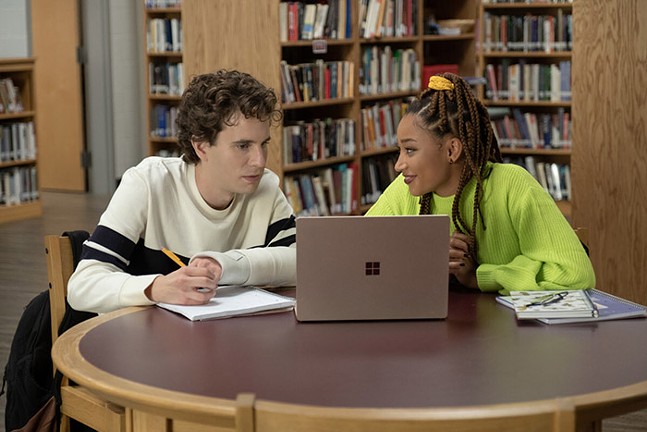 Photo: Universal Studios/Courtesy of Pittsburgh Cultural Trust
Dear Evan Hansen at Harris Theater
Dear Evan Hansen,
Today is going to be a good day. Why you may ask?
Because this movie was not as much of a dumpster fire as we had expected it to be.

Dear Evan Hansen, the movie adaptation of the 2016 hit Broadway musical, has been highly anticipated, but not necessarily in a good way.

The premise is disturbing, to say the least. Evan Hansen (Ben Platt, reprising his breakthrough Broadway role) is a high school student struggling with depression and anxiety. His therapist tells him to write letters to himself, and so he does. Only the school bully, Connor, finds Evan's letter and thinks he's making fun of him because the letter mentions Connor's sister, Zoe. When Connor takes his own life soon after, his family finds the letter and assumes Connor wrote it, and that he and Evan were best friends. Instead of telling Connor’s family the truth, Evan plays along.


It’s important to point out that Evan initially did try to come clean, albeit not hard enough. It’s also worth noting that, at first, Evan’s intentions weren’t all bad. However, once he starts to gain popularity at school and affection from Connor’s family, and begins to date Zoe, he does everything he can to make sure no one finds out.


There’s no denying the talent of the cast. Platt delivers as a singer and actor, but a common criticism when the trailer first dropped was how much older he looked than what the character was supposed to be. This was honestly really distracting throughout the movie. It’s not Platt’s fault by any means, but it was disappointing to see an obviously 28-year-old man play a 17-year-old boy. Yes, it’s been done before, many times, but that doesn’t always make it the right choice. If the film really wanted an Evan from Broadway, 19-year-old Andrew Feldman would have been a much better choice.

Kaitlyn Dever as Zoe and Amandla Stenberg as Alana were the saving graces of this movie and looked more age-appropriate. One surprise was Stenberg performing a song not featured in the original musical. Alana and Evan share a moment while discussing their mental health, and it becomes one of the only honest, undeceptive moments the protagonist has with another character. In addition, Alana’s song “The Anonymous Ones” better articulated the film's message about teen mental health struggles than the actual plot.

Another issue was the placement of the songs, as most started very abruptly, despite the effort to seamlessly blend them in. “No Requiem,” sung by Dever, Amy Adams, and Danny Pino, was probably the most natural transition, and most well-done song in the movie. “You Will Be Found,” the main song of the film, was one of the best parts of the movie. The whole sequence, featuring Evan singing during an assembly for a project formed in Connor's memory, put a modern, up-to-date spin on the tune, and it was definitely a powerful moment.

The film demonstrates why the Broadway show made such an impact with its catchy, beautiful songs, though an outlier would be “If I Could Tell Her." The song, sung by Evan to Zoe, details the things “Connor” (i.e. Evan) noticed about her, and he tells her he loves her. The song is creepy enough, but that they almost kiss at the end makes it even worse.

Overall, the movie’s issues can be attributed to poor plotting. The cast and crew, including director Stephen Chbosky, who previously centered his hometown of Pittsburgh in the film adaptation of his book The Perks of Being a Wallflower, did their best with the material they were given, but problems are still evident. It was what you would expect from a movie about a kid using someone’s suicide to benefit themselves. The representation of anxiety and mental health could not be further from the truth, other than Alana’s 10 minutes, which, again, outshined the rest of the movie.