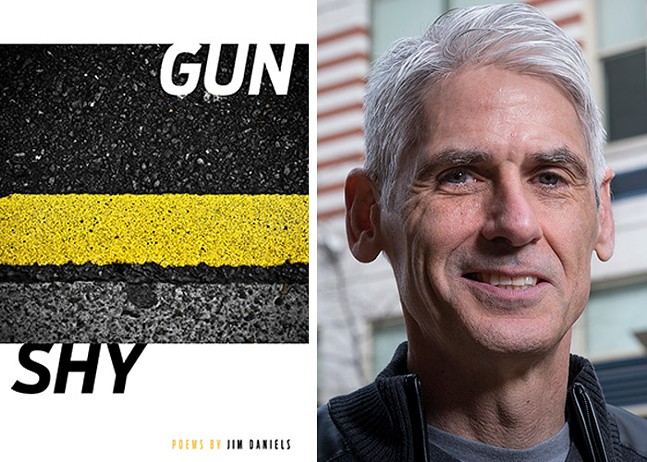 Daniels’ new poetry collection, Gun/Shy (Wayne State University Press) will be familiar to anyone who has read his work. Like a master craftsman, Daniels constructs his poems word by word, line by line, with a directness and economy of language that’s been constant in a body of work that spans 36 years.

“It’s hard to think about my voice in that way, but I hope it’s been consistent in terms of some of my concerns that I continue to write about and explore, and am continually drawn to,” says Daniels, who taught at CMU for 40 years before retiring this year.

In the poem Between Double Doors, you reference the deaths of Janis Joplin and Jimi Hendrix in 1970, when you were a teenager. Do memories like the ones referenced in this poem sharpen or fade over time?
One of the things about writing has been it’s my way of preserving memories. It can be looking at memories from the past and finally understanding them, or getting a deeper understanding of them, in some way, as I look back at myself a teenager. In some ways, that’s a very different person than I am now. On the other hand, there are certain things that trigger the memories, and music is one of them.

So many of the poems are about your parents or being a parent; notably in Music of the Light Timer, there’s the line, “My children are not coming home.” Now that your kids have left home, do you find yourself living an in-between existence?
Basically, the focus of the whole book is toggling back and forth between being a parent and being my parents’ child. … My children becoming adults and going out into the world, you do really feel it in terms of your role as a parent and your role as a child and how those two come into conflict.

One of the interesting things about becoming a parent is it triggers memories of your own childhood, in a way. You think about how your parents handled certain situations and how you handled them, or didn’t handle them. You try the best you can. Being a parent is the most humbling thing I’ve experienced, and the most rewarding.

The longtime landscapes of your poems, Detroit and Pittsburgh, are present again in Gun/Shy. But the Detroit poems seem to have more grittiness, while the Pittsburgh poems seem to have a softer focus.
A lot of people would lump Detroit and Pittsburgh together as classic, cliched Rust Belt towns. In some ways, they have similar histories, histories that I try to acknowledge and pay tribute to, but I was a different person growing up in Detroit than I am in Pittsburgh in terms of how I see things

Because I used to live so close to Schenley Park, a remarkable number of my poems have been set there over the years. It’s a refuge in the middle of the city, and when my kids were young, we spent a lot of time there. … Just being able to walk over a bridge into the park was kind of a gift. That ends up making at least some of the Pittsburgh poems, if not idyllic, as paying more attention to the natural world.

The last poem in the collection, The Grand Design, is set in southern France  [where Daniels and his wife, writer Kristin Kovacic, are spending more time]. Is this your transitional poem, what you’re going to focus on going forward?
Based on what I’ve been writing here [in France], I would say maybe not, but I did want to bring in an awareness of that. Because one of things I don’t want to be limited to or to be stereotyped as is someone who just writes about certain things or places. I feel like I have permission to go to France and write about France, that being just part of my explorations geographically, that take me to new places emotionally as well.
© 2022 Pittsburgh City Paper