Nine amendments were tabled that would have blocked or amended Wolf’s order; a procedural challenge is ongoing 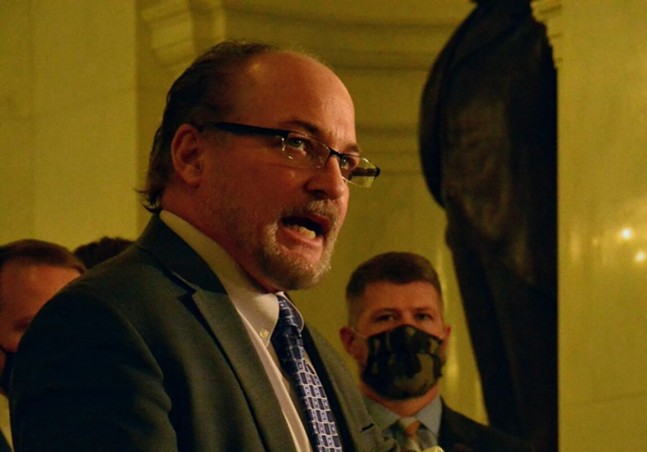 As some areas of Pennsylvania struggle with COVID-19 case spikes, House Majority Leader Kerry Benninghoff (R-Centre) said at a press conference that Republicans “believe that those school boards, in conjunction with their parents, should be making decisions that are best for them.”

But a little more than a day later, and the answer from the caucus was “let’s talk later,” as the chamber tabled nine similar but distinct amendments to create exemptions in or completely repeal Wolf’s order.

The amendments were filed by state Rep. Curt Sonney (R-Erie) to a semi-related bill of his own, cutting down the length of school boards’ emergency powers from four years to 60 days without a public vote.

The bill would also require school districts to only use emergency powers after at least five days of in-person instruction are cancelled.

However, after an hour-and-a-half of private discussions Tuesday, House Republicans returned to the floor and instead advanced Sonney’s legislation with no changes.

The amendments would have either given school boards the sole authority to implement mask mandates — sometimes with liability protections — or forced school districts to accept opt-out forms from parents or doctors, according to drafts reviewed by the Capital-Star.

“All of those amendments were just detailing different options, and it was a way to have a good candid conversation within our caucus about those different options,” Sonney told the Capital-Star. “At this time, we decided not to move forward with any of those options.”

Sonney hinted that House Republicans also faced some internal divides over the measures, saying that “we were close” to having the votes on some of his proposals.

Sonney added that he objected to the Wolf administrations’ executive action on masks, and that Republicans were still looking to other avenues to address it.

“We’re the lawmakers,” he said. “We can craft and do anything we have the votes to move forward with.”

Jason Gottesman, spokesperson for Benninghoff, said that the delay in action was to vet “innovative and comprehensive solutions” presented by Republican lawmakers in the internal meeting.

He did not elaborate on what those proposed solutions were, or provide a timeline for further action.

Bill Patton, spokesperson for House Democrats, told the Capital-Star that the caucus was “happy that the idea was not pursued today, but we remain concerned that many Republican members continue to talk about trying to disrupt the mask order.”

“The COVID pandemic is still very active and legislators should not be acting in a way that would endanger children’s health,” he added.

The House is back in session a week earlier than planned after rank-and-file Republicans expressed frustration with Wolf’s school mask mandate.

However, Wolf holds most of the leverage, as he can veto bills challenging his power, and while Republicans have legislative majorities, they have not yet garnered the two-thirds majority needed to override Wolf.

If enacted, Kensinger said, the bill would mean that virtual days could no longer be used to meet the 180 instructional day requirement, meaning schools “would not have the flexibility to switch to virtual learning for any reason or any emergency,” from weather to HVAC problems to non-COVID health related concerns.

House Republicans have already turned to an obscure and seldom used regulatory committee to challenge Wolf’s mask order, arguing it was improperly implemented. The committee had its last vote in 2018, and ruled against a Wolf administration PennDOT policy.

At best for Republicans, the committee would rule against Wolf once more, and force him to use emergency rule making powers, delaying the order by a few months. At worst, they could lose the vote, potentially leaving ground for legal action against the Wolf administration.

House Speaker Bryan Cutler (R-Lancaster) told the Capital-Star Monday that he wouldn’t speculate on what the House would do next, and expressed confidence the regulatory committee would rule against Wolf.

“I believe in law and order,” Cutler said. “Even if I may disagree with the underlying decision, I think you have to follow the law to get there.”

A lawsuit, filed by Senate President Pro Tempore Jake Corman (R-Centre) among others, is also pending in Commonwealth Court.

According to an August poll commissioned by the Associated Press, about 60% of Americans support school mask mandates.

There were 11.5 times as many cases of COVID-19 among school aged children from Sept. 8 to Sept. 14 of this year than during the same period last year, according to the state Department of Health.
Stephen Caruso is a reporter with the Pennsylvania Capital-Star, where this story first appeared.
© 2021 Pittsburgh City Paper