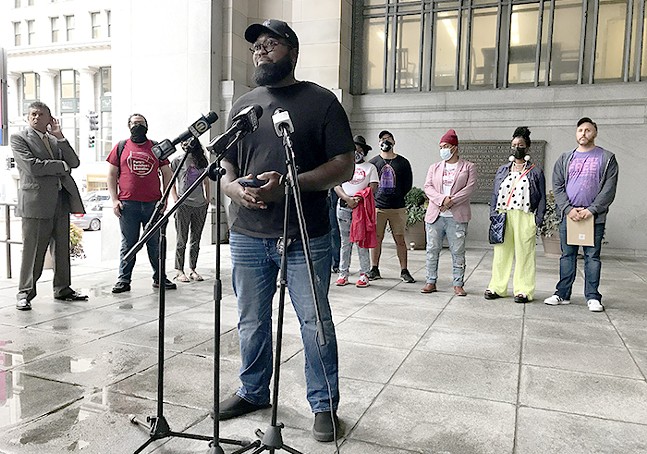 CP Photo: Ryan Deto
MAN-E speaks in the portico of the City-County Building during a press conference on Wed., Sept. 15, 2021.
A group of criminal-justice advocates is calling on Allegheny County officials to vote against a proposed contract for the Allegheny County Jail that involves a company with a leader who advocates says has “compared Black people to dogs.”

Joseph Garcia is the leader of Corrections Special Applications Unit (C-SAU), a company that provides military-style training to security companies, police officers, jails, and prisons. On July 27, Allegheny County issued $400,000 worth of no-bid contracts to C-SAU, as well as Lightfield Less Lethal Research, for military-style training and less-lethal weapons for correctional officers at the Allegheny County Jail.

In advance of the vote on this proposal, scheduled for the Jail Oversight Board hearing on Mon., Sept. 20, a coalition of advocates held a press conference on Wed., Sept. 15, urging Allegheny County officials to reject the contract.

Representatives from the Alliance for Police Accountability, Bukait Bail Fund, the Abolitionist Law Center, and others spoke in the portico of the City-County Building in Downtown Pittsburgh, criticizing the proposal to hire C-SAU, and citing the company’s record in relation to the death of an incarcerated person suffering from mental illness, and the jail’s already high rankings of correctional officers using force and suicides of incarcerated individuals.

Jonas Caballero of the Abolitionist Law Center also says he believes that any company associated with Garcia should be a non-starter for Allegheny County. He called Garcia a “racist, bigoted, trigger-happy crony.” As Pittsburgh City Paper reported in August, Garcia claimed that following the death of George Floyd, there would be race riots in prisons targeting correctional officers, something that never materialized.

At the press conference, Caballero continued and said that Garcia even “compared Black people to dogs.”

This is an apparent reference to Garcia’s appearance on the Talking Lead podcast, which is a show based around the firearms industry, according to its website. On the podcast, which was published on Aug. 28, 2020, Garcia criticizes the Black Lives Matter movement and then mocks it, saying that he prefers, “Dogs Lives Matter.” Garcia trains and uses Giant Schnauzer dogs as part of C-SAU’s training.

“I call BLM a small organization. If people really realize where their money is going to or if people did their homework on BLM, it's just a Marxist organization itself,” said Garcia on the August 2020 podcast. “I personally like DLM. I don’t know if you have heard about that, you know Dogs Lives Matter. I’m supporting that organization. Just remember that. Dogs. Lives. Matter. Dude.”

Allegheny County Jail warden Orlando Harper issued a statement saying the jail sought a contractor to comply with the recently passed referendum banning the  use of chemical agents, leg shackles and restraint chairs, and says the decision to work with C-SAU was to complete training for correctional officers to comply with those new rules. Harper said the jail doesn't make decisions based on someone's personal history.

"Specifics of Mr. Garcia’s resume, employment history, or financial or legal history are questions for him," said Harper. "We do not make decisions for contracting based on statements or comments, including indication of a person’s political affiliation or personal beliefs, made by those with whom we contract. This contractor is providing training on specific tools for our corrections officers. The jail administration will be responsible for ensuring that the correctional officers who are trained continue to meet our stated goals."

MAN-E, an advocate with the BUKIT Bail Fund, also criticized Garcia for his past comments and urged officials to reject the contract with C-SAU. He said the jail is in too precarious of a situation currently to work with a company that has a leader with such extreme views.

“We want to treat incarcerated people as human beings, not like dogs,” says MAN-E.

In addition to comments about “Dogs Lives Matter,” Garcia also made comments praising former President Donald Trump, contempt for the media, downplaying the COVID-19 pandemic, and apparent references and support for the QAnon conspiracy theory.

Garcia said he loves Trump and claimed that Trump could put CNN out of business. He also brought up alleged sex trafficking and “exploiting of children” on Facebook and said that he wished the social media company would put more of an emphasis on that. Later in the podcast, he used language mirrored by followers of the QAnon conspiracy theory, which falsely believes that Democrats are running underground sex trafficking rings and eating babies.

“Trump’s people and the followers, the people who have their eyes open and understand that truth. You can’t stop that dude, and that’s what the problem is,” said Garcia. The term “eyes open” is often used by followers of QAnon.

The next Jail Oversight Board meeting is at 5:30 p.m. on Mon., Sept. 20, where board members will discuss the proposed C-SAU contract.
© 2023 Pittsburgh City Paper